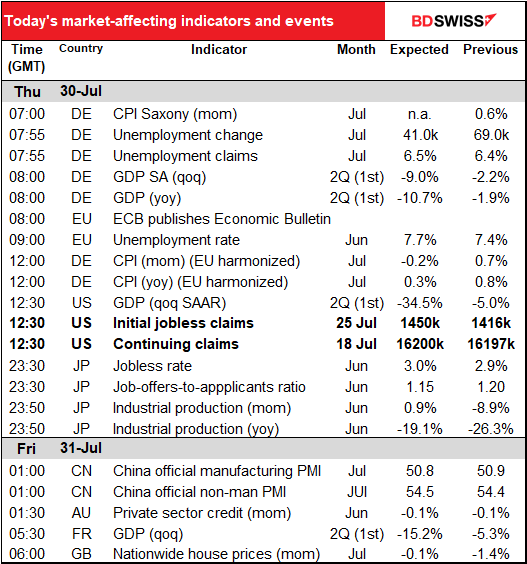 The July meeting of the US Fed’s rate-setting Federal Open Market Committee (FOMC) had no notable surprises and made no significant changes in policy. In their statement, Committee just updated the description of current economic conditions to reflect that economic activity and employment have picked up “somewhat,” but they hedged even that small improvement. The only real change in the statement was a new line stating that the “path of the economy will depend significantly on the course of the virus,” which everyone knew already anyway. In the press conference, Chair Powell said this statement is “the most central fact” with the virus being the “most central driver of the path of the economy right now.” He was concerned that the increasing number of coronavirus cases is starting to weigh on the economy and reiterated the need for more fiscal stimulus.

Powell’s response suggests that if the virus gets even worse than what they already assume, they would probably have to revise down their forecasts. But that would probably result in calls for more fiscal support first. More monetary policy support – further loosening – might be warranted only if financial conditions deteriorated at the same time.

The dollar weakened significantly as Powell began speaking, with GBP/USD trading above 1.30 while USD/JPY fell below 105.00. This was due to his pessimistic comments that “the increase in virus cases and the renewed measures to control it, are starting to weigh on economic activity,” including consumer spending and the labor market. However the dollar later recovered somewhat.

Perhaps the most significant part of the FOMC meeting came in a separate statement in which they extended until end-March next year their temporary USD liquidity swap lines with other central banks and the temporary repurchase agreement facility for foreign and international monetary authorities. The swap lines were established on 19 March and originally scheduled to run “for at least six months,” i.e. until mid-September. The extension may mean that the Fed thinks the extraordinary demand for dollars abroad hasn’t gone away, but it also means that overseas demand for dollars won’t exert the kind of extraordinary upward pressure on USD that it did early on in the crisis.

In any case, the Fed’s actions have removed that factor from the market for the time being. As the basis swap data shows, conditions have come back to pretty much where they were before the virus hit. 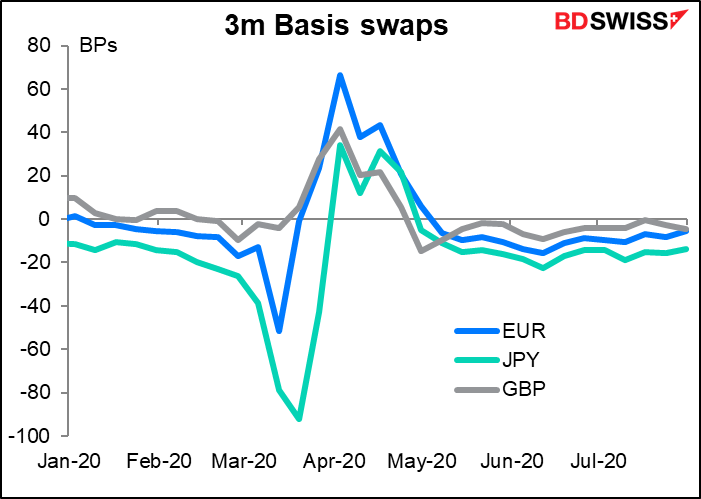 One potentially significant point to come out of the press conference was that the Committee’s policy framework review will be completed in the “near future.” I expect more details of this review to come out at the Fed’s virtual Jackson Hole meeting in August, as is often the case, and perhaps for them to implement the new framework in September. Indications are that they are likely to adopt some form of inflation target averaging, i.e., allowing inflation to overshoot the target to compensate for periods when it undershot. Since that implies a period of lower real yields (nominal yields unchanged while inflation rises), it’s likely to be negative for the dollar.

Today’s market
The day actually starts with the Saxony inflation data, but we’ll just ignore that, shall we?

Then the first thing you have to pay attention to is the German unemployment data. It’s expected to be a lot better than recently – maybe not as bad as recently would be a better way to put it. The estimated 41k increase in the number of unemployed is high but not unprecedented, like the previous months’ figures were (April’s 372k was the record). And the expected 1-tick increase in the unemployment rate is a mere bagatelle. This shows the wisdom of paying companies to keep people in their jobs. 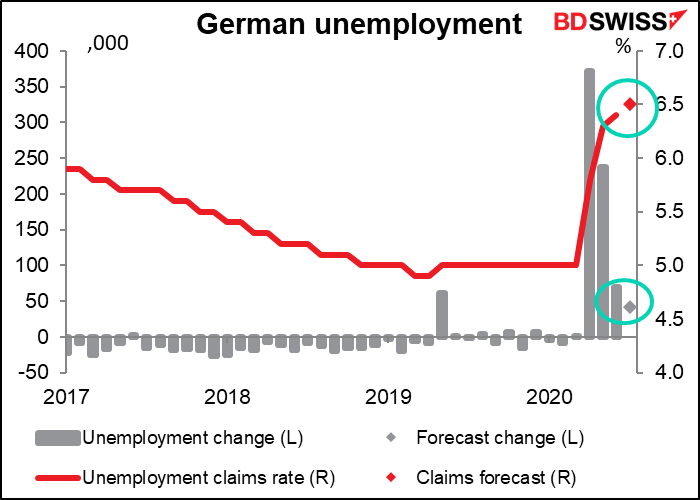 Next comes German GDP. It’s expected to be down 9.0% qoq, which is of course going to be the worst on record. (That’s equivalent to -31.4% qoq SAAR, the way the US calculates it). But everyone knows and expects that. 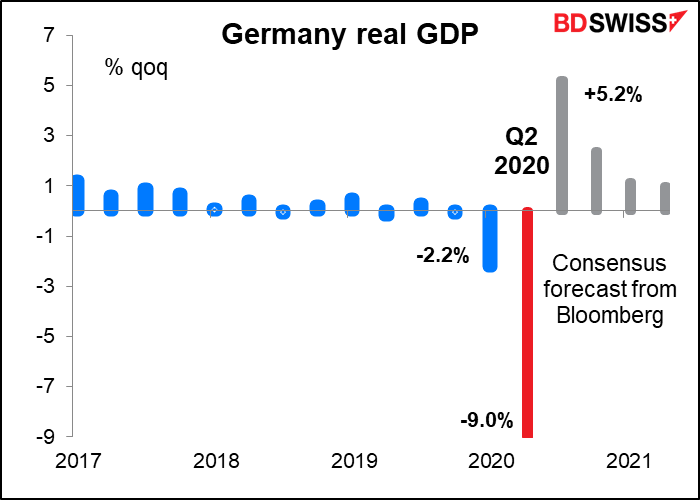 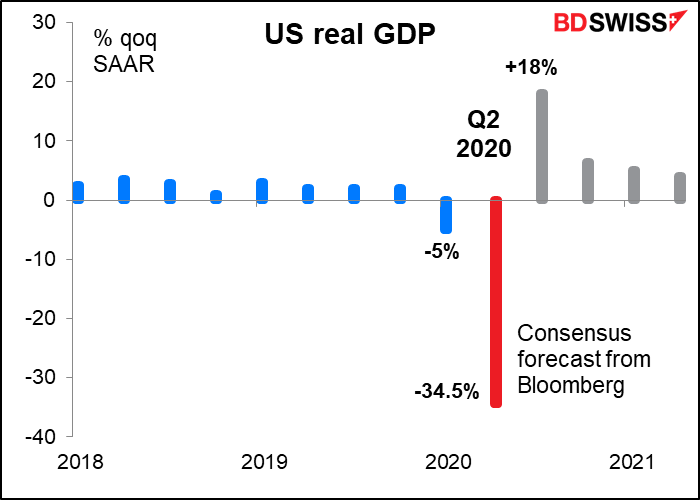 The key point however is not how bad Q2 is, but how good Q3 and subsequent quarters are. In other words, how quickly can each country dig itself out of this hole? Looking at the market’s predictions, at the end of the forecast horizon (4Q 2022), German GDP would be 0.8% below the Q4 2019 level. That’s a long time without a full recovery. The Eurozone overall is expected to be significantly worse than Germany alone at -2.3% (we’ll get Eurozone Q2 GDP tomorrow). Oddly enough, the market forecast for the US over this time horizon is exactly the same as for the Eurozone: -2.3%. While Europe was seen as having a bigger fall in Q2, it’s expected to have a quicker recovery as well, as it’s gotten the virus under control much faster. 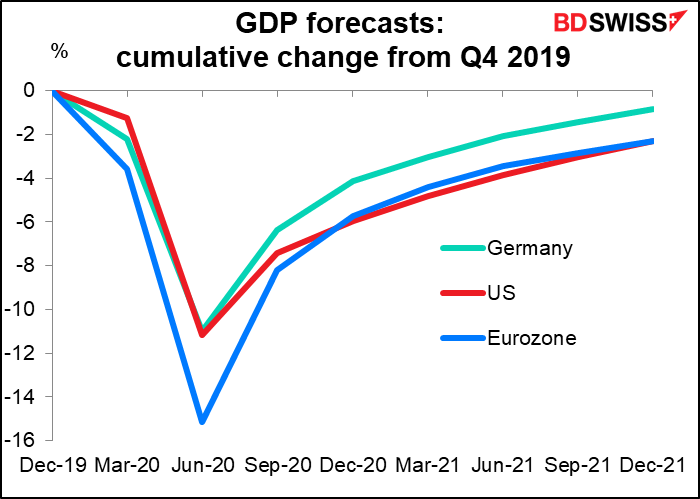 If the market maintains these forecasts, then the EUR/USD rally probably doesn’t have that much further to go. However, I expect the Q3 forecasts to be revised substantially. As the FOMC statement said, “the path of the economy will depend significantly on the course of the virus.” That applies equally to Europe as to the States. Given the discrepancy in virus cases in the two regions, I question whether the US can indeed recover at the same pace as the Eurozone, especially with the Republican Party determined to make sure that 30mn people don’t have any money to spend. 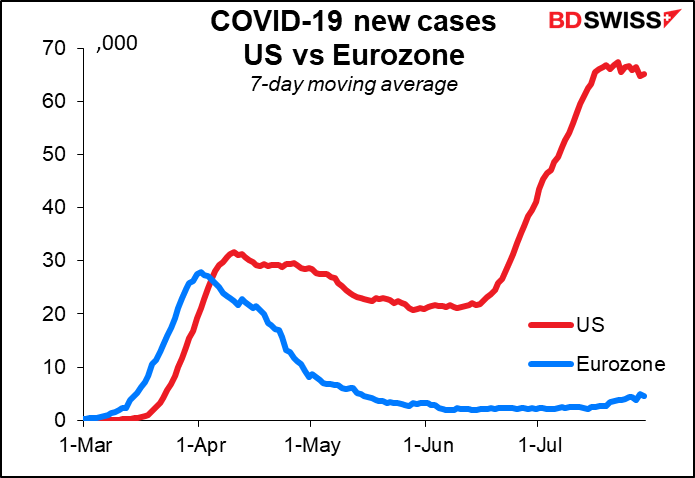 So far, the indications are no, that’s not going to happen. In which case, the growth differential can indeed drive EUR/USD higher. 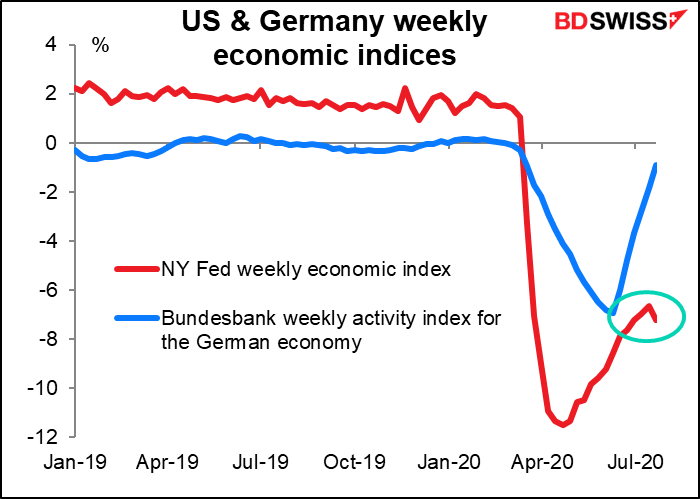 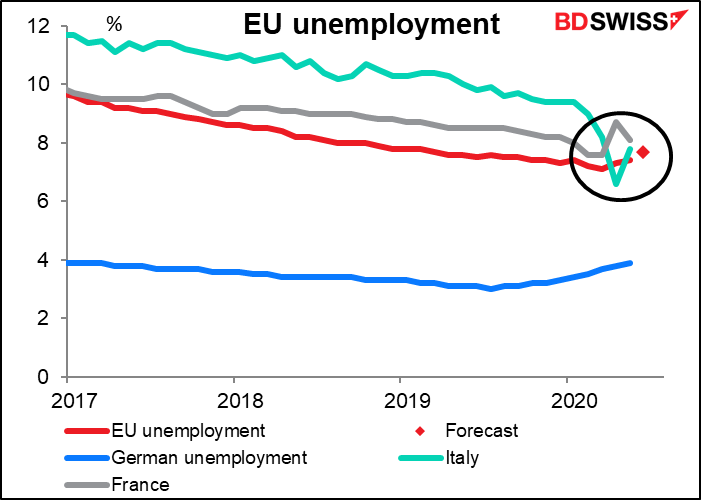 German consumer price index (CPI) is expected to fall almost into deflation – prices are forecast to be up only +0.3% from a year earlier. (This is the EU-wide harmonized calculation.) Next up is the closely watched US jobless claims figures.

After last week’s shock 109k rise, initial jobless claims are forecast to be up 14k or 1% from the previous week. It’s a small rise, but this is the first time since they peaked back in March that they’ve been forecast to rise week-to-week, as far as I remember. Continuing claims are also expected to be up, a more substantial 103k rise, which barely even shows up on the graph. 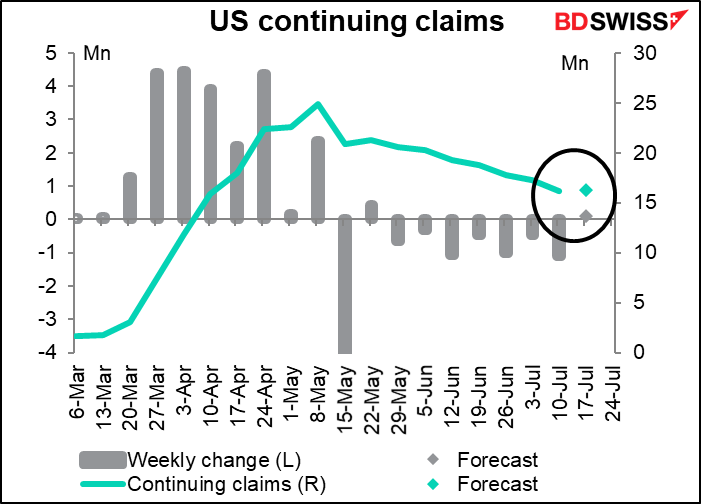 Don’t forget by the way that these are not the only unemployment programs in town. There’s also the PUA: Pandemic Unemployment Assistance. That adds another million or so people. 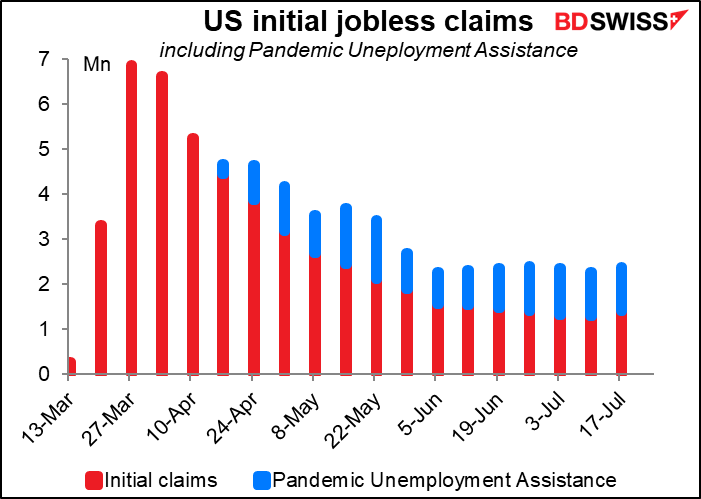 If we add that in, initial claims have been rising more than you may think. 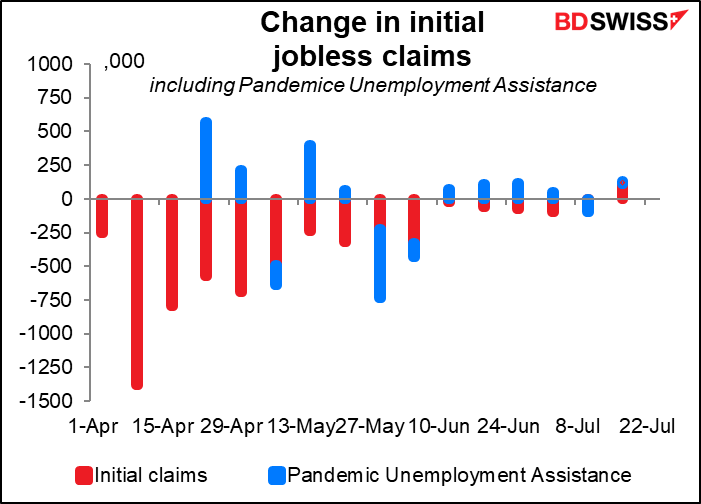 Then it’s calm for the rest of the US day.

When Asia opens up, it’s the last day of the month and Japan has its usual data dump.

The unemployment rate is expected to rise only modestly, while the job-offers-to-applicants ratio is forecast to fall further but remain above 1.0. As I’ve discussed previously, much of this good performance is an optical illusion caused by various schemes that pay companies to furlough workers instead of laying them off, plus many of the workers who do lose their jobs withdraw from the labor force and so are not counted as unemployed. The employment situation in Japan isn’t as wonderful as it seems. 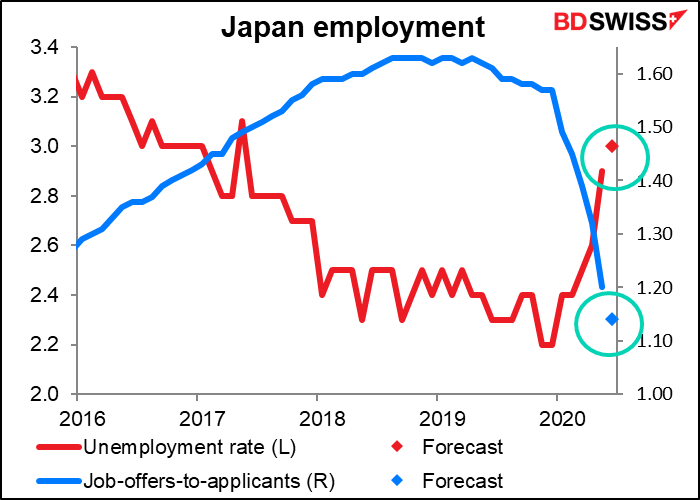 Japan’s industrial production meanwhile is expected to show little improvement from its extremely low levels – down 20% from the January-February average. I don’t have a breakdown of the composition of Japan’s IP, but I suspect that the collapse of auto sales worldwide may have a lot to do with this. 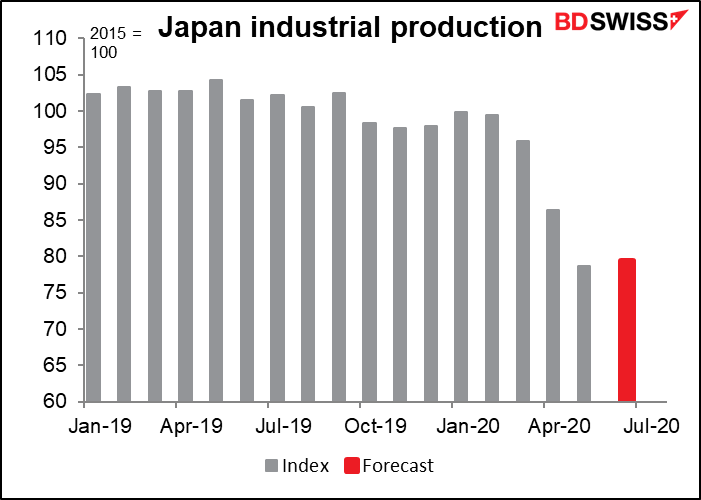 In any event, Japanese indicators haven’t been moving the yen recently. USD/JPY has been remarkably steady, with most of the fluctuations coming either as a result of global “risk-on” and “risk-off” behavior or due to general USD strength or weakness.

China releases its official purchasing managers’ indices (PMIs), as opposed to those produced under the auspices of the Markit organization, which does them everywhere else (including China, too). These are expected to be excruciatingly boring, which maybe isn’t such a bad thing nowadays. They’re both forecast to be just one tick either side of the previous month, which is inconsequential. It would indicate that some measure of stability has come back to China. 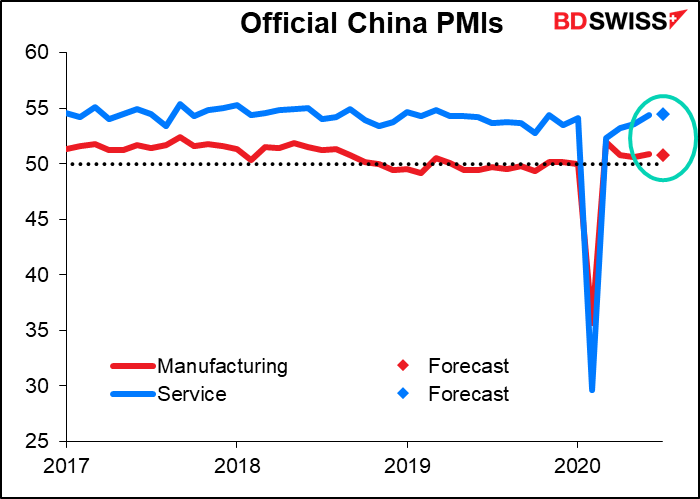 Australian private sector credit went shooting up in March as businesses drew down their credit lines to stay afloat, then was unchanged in April and fell a bit in May, the first mom decline since June 2011. It’s expected to be down a bit more in June, but that’s only to be expected as the housing market has slowed considerably, as we saw from yesterday’s Australian building approvals. Meanwhile businesses are just trying to survive, never mind borrowing to invest. 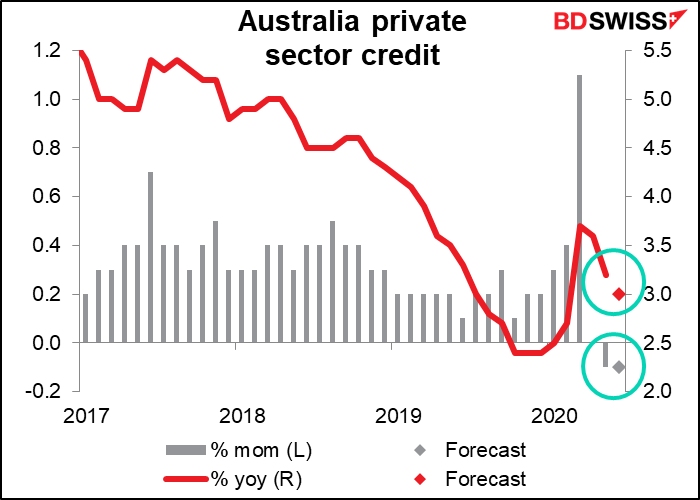 Finally, as Britain starts stirring its morning tea, the Nationwide Building Society announces its house price index. The market expects it’ll show a small fall in house prices on both a mom and yoy basis. Not surprising, given all the uncertainty there between Brexit and the virus. 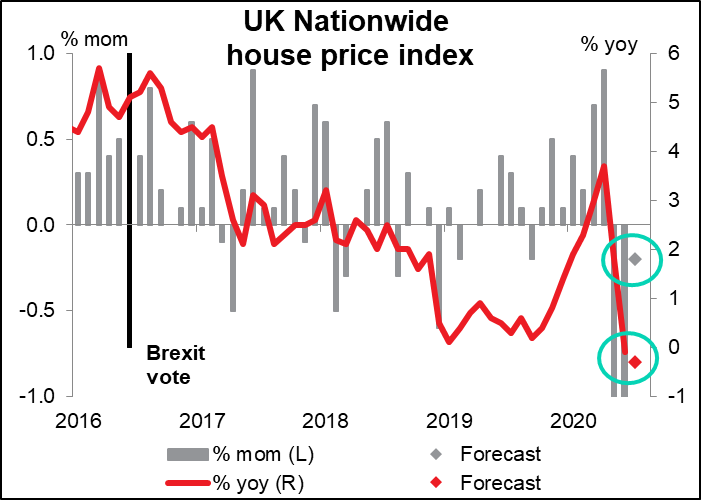 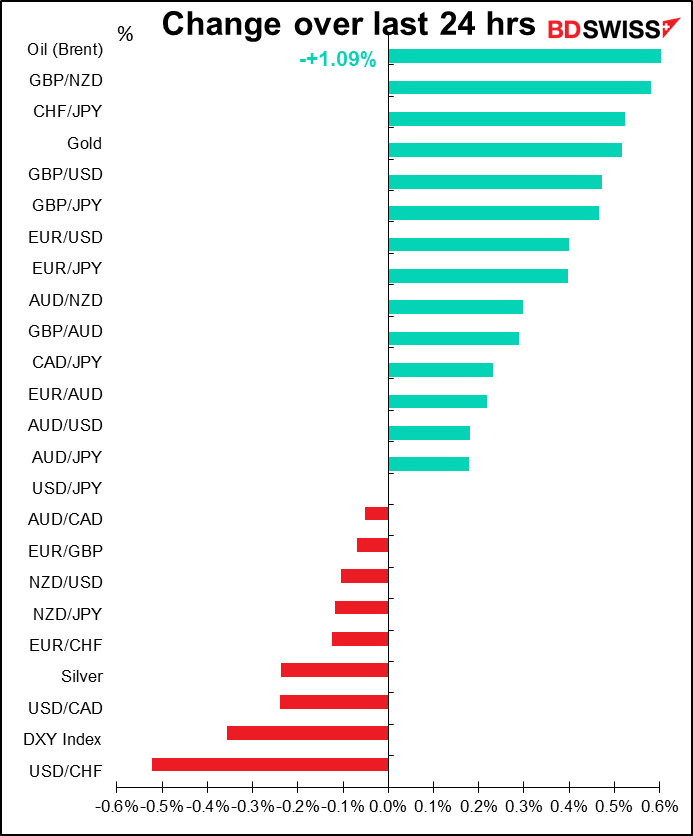