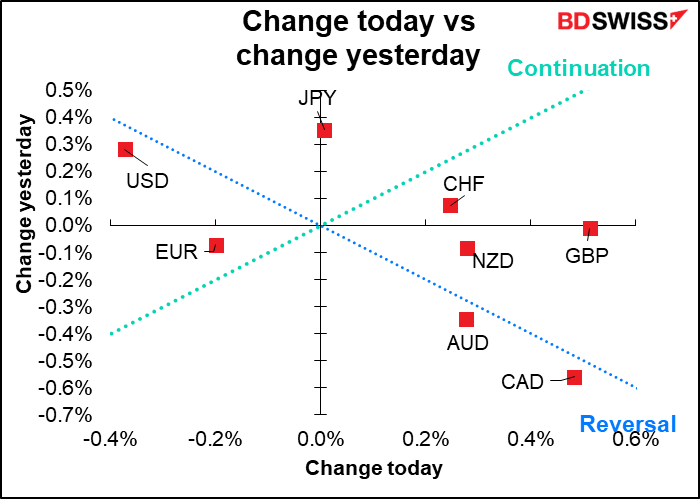 For all the waiting and wondering about what the European Central Bank (ECB) might do, it doesn’t seem to have made that many waves in the currency market. The ECB “recalibrated” the pace of purchases in the Pandemic Emergency Purchase Programme (PEPP), but left the decision of when to end it for later. They announced that they would conduct the PEPP purchases at “a moderately lower pace … than in the previous two quarters.” Reuters reported that the monthly target for bond purchases would be EUR 60bn-70bn, down from around EUR 80bn a month over the last two quarters. ECB President Lagarde ruled out calling it a “tapering,” instead saying it was a “recalibration … for the next three months” instead. Of course, what’s the difference between “tapering” and “recalibrating”? If it’s not likely that you later “recalibrate” upward again, then nothing, really.

I wonder what all the fuss is about because if you look at the data, you’ll see that they already started cutting back their purchases in August, when they bought only a net EUR 61.7bn. (On the other hand, that followed purchases of EUR 93.4bn in July, which makes for an average of EUR 77.6bn for the two months, vs an average of EUR 76.1bn the previous two months, so one might consider it to be unchanged.) 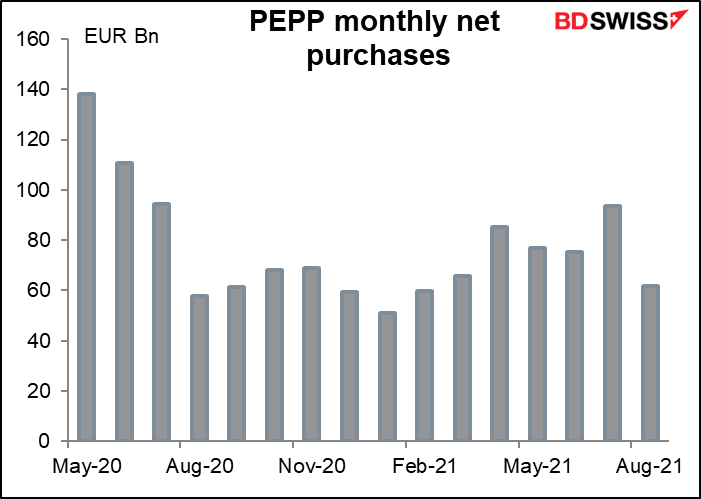 Lagarde indicated that the Governing Council would decide in December whether to end the PEPP next March and if so, how to transition to the Asset Purchase Programme (APP), the ECB’s other bond-buying program

The new ECB staff forecasts raised growth for this year a bit but lowered it for next year. For inflation, they raised it across the forecast horizon but still left inflation well below target in 2023 at +1.5% yoy, vs their 2% target. They commented, “Headline inflation is projected to average 2.2% in 2021, peaking at 3.1% in the fourth quarter of 2021 before declining to an average of 1.7% in 2022 and 1.5% in 2023. The spike in headline inflation in 2021 reflects upward effects from largely temporary factors…” such as higher energy costs and the reversal of the German VAT cut. 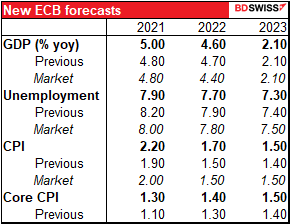 European bonds rallied in response to Lagarde’s remarks that the ECB wasn’t in a rush to withdraw stimulus. Yields on 10yr Bunds fell -3.8bps and other countries’ spreads over Bunds tightened notably. 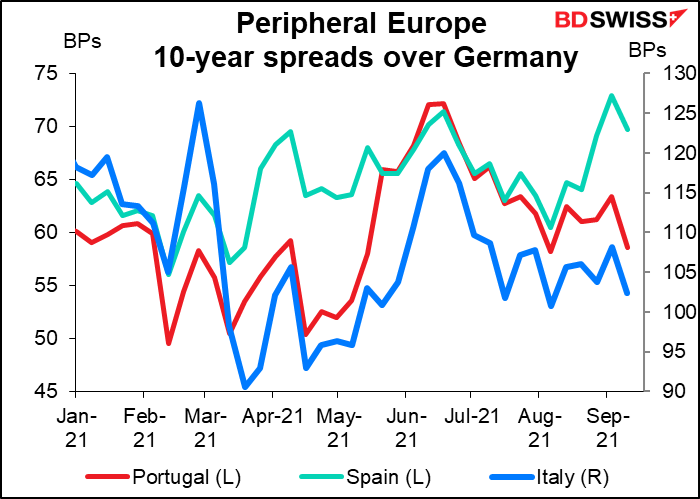 This despite break-even inflation rates moving higher. The result was lower real yields in Europe, which in theory should be negative for EUR, although in fact hasn’t been a particularly strong factor in determining EUR/USD in recent months. 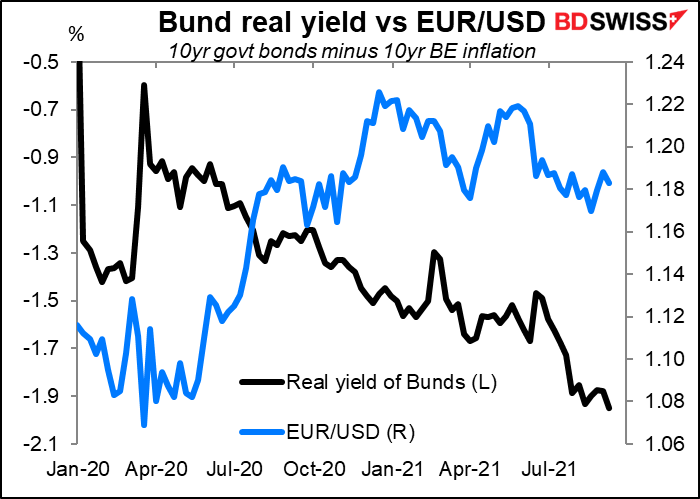 It seems to be better correlated with EUR/CHF, at least this year – perhaps this news is positive for CHF. 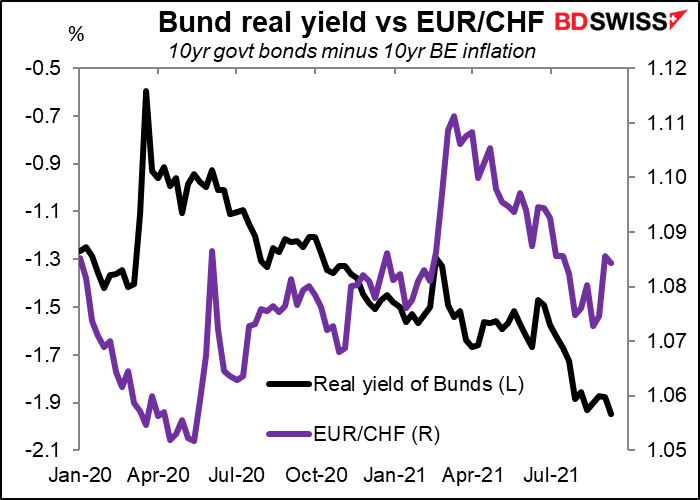 CAD has been moving quite independently from the oil price for the last several days. Monetary policy and the upcoming Canadian Federal elections (Sep 20) are probably weighing on peoples’ minds more.

The main feature today, the UK short-term indicators, are already out. GDP massively missed estimates, while the trade deficit was larger than expected. Industrial production beat estimates handily though. The news should in theory be negative for GBP but doesn’t seem to have had much impact so far. 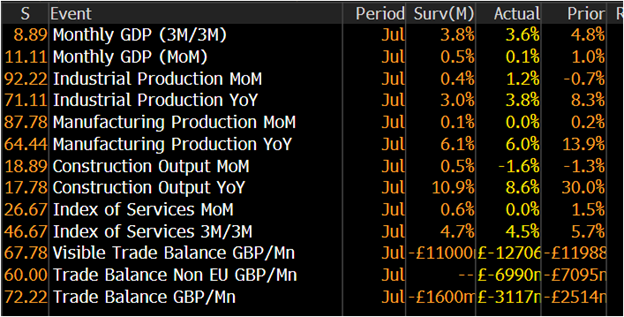 Canada’s unemployment rate is expected to fall by 2 percentage points. That’s pretty good, although it would still leave unemployment well above the pre-pandemic level. 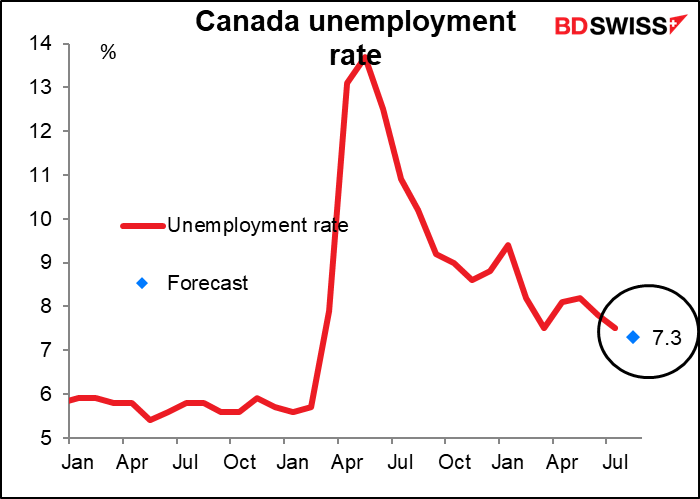 Employment is expected to increase by only 68k jobs. That’s not so great. 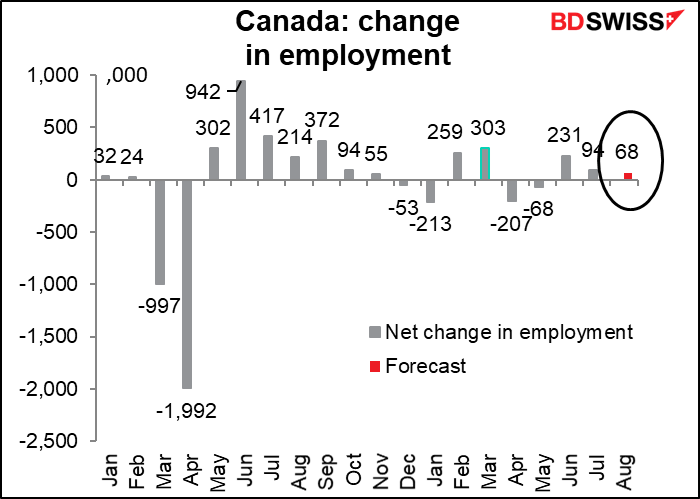 However it’s about what one would expect, given the increase in the severity of the lockdown during the month, as measured by the Oxford lockdown stringency index. 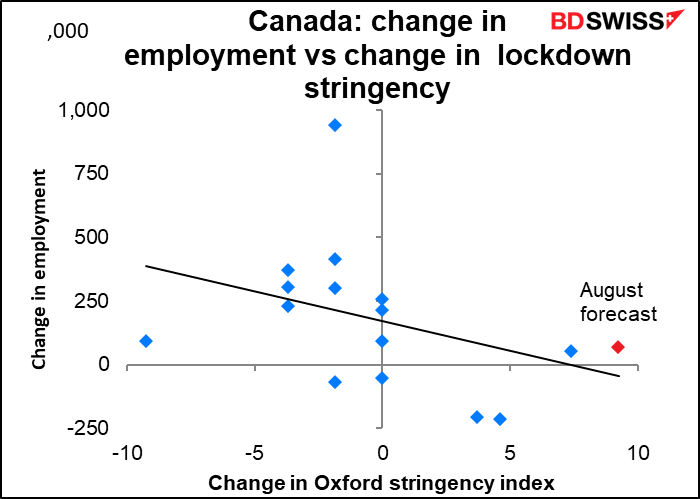 Earlier this week, the Bank of Canada said in its statement following its meeting that “Employment rebounded through June and July, with hard-to-distance sectors hiring as public health restrictions eased. This is reducing unevenness in the labour market, although considerable slack remains and some groups – particularly low-wage workers – are still disproportionately affected.”

US producer prices are predicted to power upward yet again. This could set off warning bells ahead of next week’s US consumer price index, although as I point out in my article, The PPI and the CPI: what’s the connection?, the connection isn’t so simple. In any case, the market is likely to look aghast at higher prices and think it means earlier tapering, which could be positive for USD. 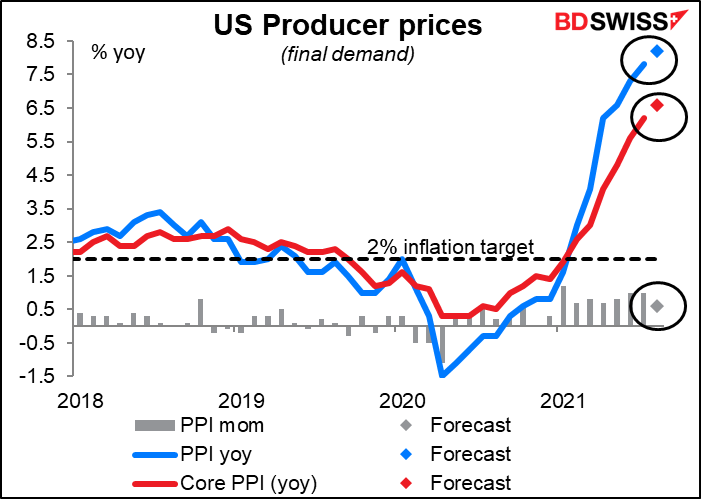 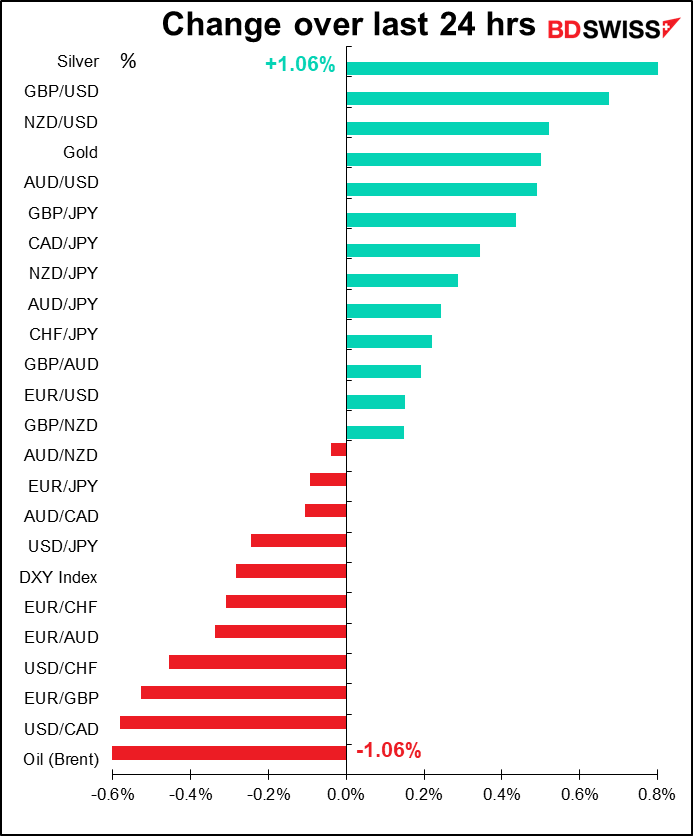