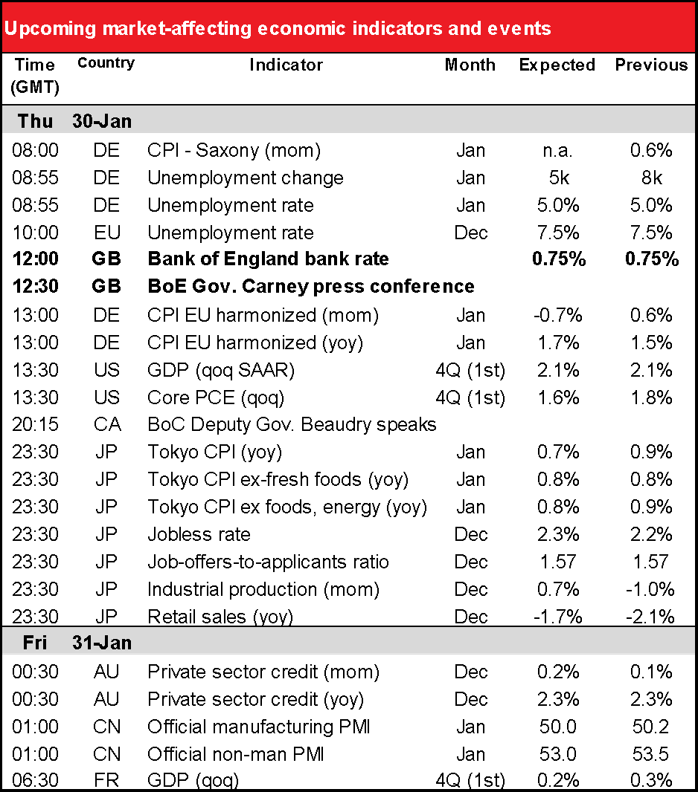 Yesterday’s Federal Open Market Committee (FOMC) meeting was as uneventful as expected. As usual, Fed Chair Powell said monetary policy was “well positioned” and “appropriate,” but could be changed if there were a “material reassessment” of the outlook. Same old same old.

There were a few minor changes in the statement – they characterized inflation as “returning to the committee’s 2% objective” rather than “near” the objective, perhaps because they didn’t want people to think 2% was a ceiling for inflation. Powell expressed some concern in the press conference about persistently low inflation causing inflation expectations to fall, although this is nothing new for the Fed. The statement also downgraded consumer spending slightly, but Powell ameliorated those concerns somewhat when he said in the press conference that “the fundamentals supporting household spending are solid.”

Powell discussed the coronavirus – he said it’s a very serious issue that increases macro uncertainly and will likely disrupt global activity. No kidding.

They raised the interest rate on excess reserves a bit, as expected. This is just a technical adjustment and has no policy implications.

The market viewed the statement as slightly more dovish and the odds of a rate cut this year increased accordingly. The dollar initially fell, but later recovered all its losses to be little changed on a trade-weighted basis. 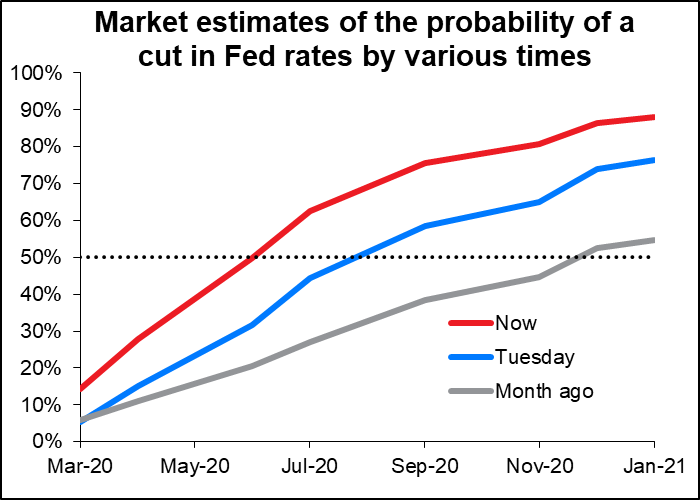 Otherwise, as I suspected, “risk off” came back into fashion again with a vengeance. Although the US market closed unchanged yesterday, every stock market in Asia that’s open is down today (China is still on holiday). No need to look around for more explanations about why JPY and CHF are up, AUD and CAD are down. You don’t need a currency strategist to explain the markets nowadays, you need an epidemiologist.

The biggie today is the Bank of England Monetary Policy Committee (MPC) announcement. This is BoE Gov. Mark Carney’s last BoE meeting. The BoE is one of the few major central banks that’s really “in play.”   You can see how the market’s conviction in a rate cut by September (blue line) had risen sharply, but then just as sharply started turning down in the last few days. 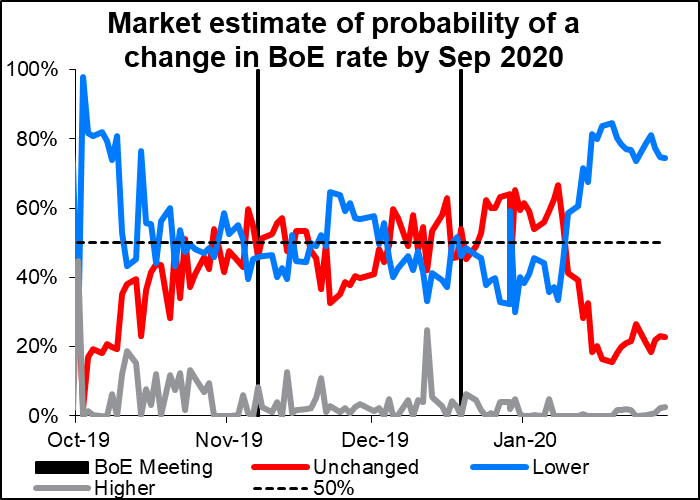 The pattern mirrors the movement in the Citigroup economic indicator surprise index (grey line, below). The rise in rate cut expectations follows several disappointing economic indicators, particularly the disastrous retail sales figures (-0.6% mom vs +0.6% mom expected). But then several other indicators came in better than expected, notably employment (+208k vs +110k expected) and the surge in the Confederation of British Industry (CBI) business optimism index (+23, vs -20 expected, -44 previous).The main point is that the retail sales figures were for December and the business optimism figure was for January, i.e. after the election. That gives more hope for the future. 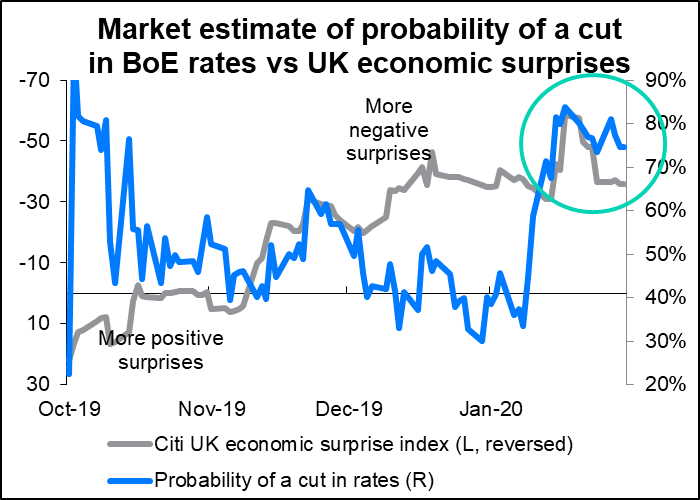 BoE Gov. Carney recently divulged that there is a debate on the MPC “over the relative merits of near-term stimulus to reinforce the expected recovery in UK growth and inflation.” Two MPC members – Silvana Tenreyro and Gertjan Vlieghe – said recently they’d vote for cutting rates if there are no signs of improvement in the economy. This would be in addition to the two members (Jonathan Haskel and Michael Saunders) who said at the December meeting that they would like to see a cut in rates. Two + two = four = nearly half of the nine-member committee.

The question then is whether good employment data, a rise in business optimism, and some recovery in the manufacturing PMI outweigh terrible retail sales and slowing inflation. How many data points do they need to confirm an improvement? How long are they willing to wait? Do they go for an insurance cut or a dovish hold? The December manufacturing PMI, 49.8, was above the level that has normally elicited a rate cut. But that’s not an insurmountable barrier; since 2001, the Bank has cut six times when the PMI was at or above 50 (vs 11 times when the PMI was below 50. It didn’t cut in 2011-2013 when the PMI was below 50 because Bank Rate was already at a record-low 0.50%.) 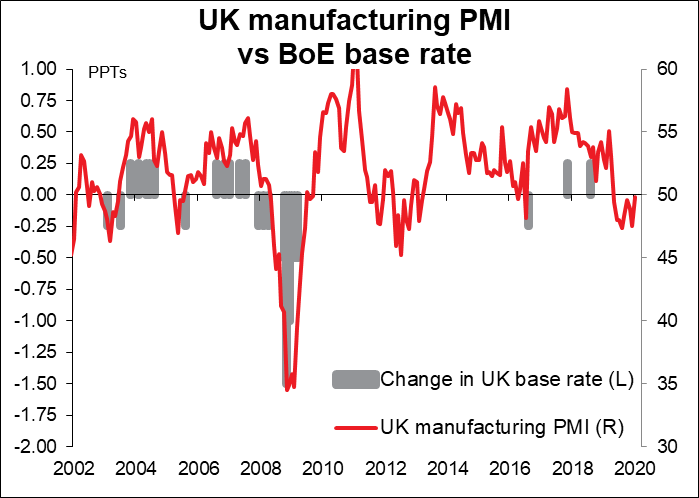 Will they wait? I think the vote may be close this time – there could be three or four votes for cutting – but I think they won’t have a majority yet. The global picture is improving and we are on the cusp of Brexit. I think they will hold their fire and the pound is likely to rebound as a result.

Personally, I think they should wait until the March budget at least to see how the fiscal side will work out. I think governments have become entirely too reliant on monetary policy and need to use fiscal tools as well to manage their economies. Furthermore, it’s hard to make accurate forecasts about the economy without knowing what’s going to happen on the fiscal front. (It’s hard enough to make them even if you know.) But much can happen by then, especially with the UK leaving the EU on 31 January. They won’t wait if they do see further deterioration in the economy after that.

As for the indicators, it’s Germany day today. We have German employment and German inflation data today.

The German employment data is my new nominee for the Most Boring Statistic In The World Award. I had thought Japan had this award sewed up in so, so many ways, but now it dawns on me that the German unemployment rate is going to be hard to beat. How can any statistic in a free capitalist society be so stable? Exactly the same for 12 out of the last 14 months, and expected to be the same again today? Something is really, really fishy here. This looks to me like Chinese data, not European. The change in unemployment is modest and not really market-affecting yet, although the trend is certainly not good and bears watching (unlike most other countries, Germany registers how many people are now unemployed, not how many new jobs there were, so a positive number is bad, negative is good). EUR neutral. 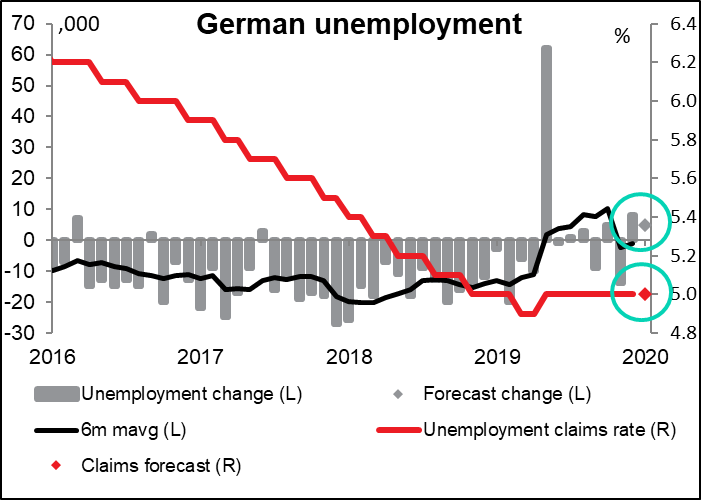 German consumer price index (CPI) is more important, as it accounts for some 28% of EU-wide inflation. Prices are forecast to fall pretty sharply on a mom basis (-0.7%), but since they fell even more in the like year-earlier period (-1.0%), the yoy rate of increase is expected to accelerate. However, this is mostly due to higher energy prices. Since the ECB looks at core inflation, not headline, this isn’t likely to be the EUR-positive event you might think. EUR neutral. 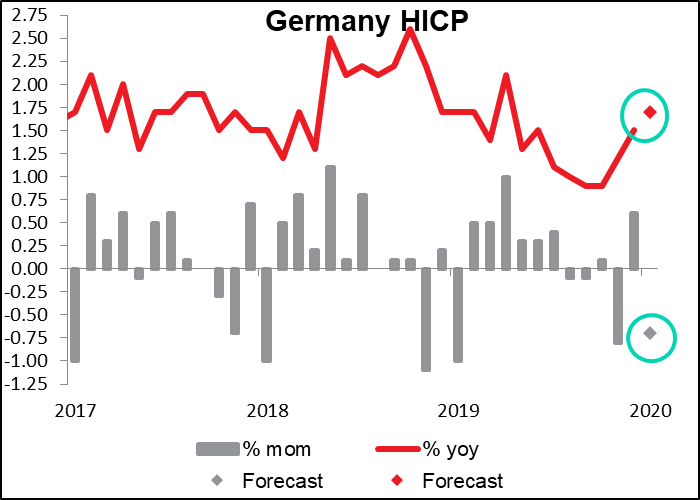 Now we wait till the US opens, at which point we get the first estimate of US Q4 GDP. It’s expected to be up 2.1% qoq SAAR, which would be unchanged from Q3 and in line with the four-quarter moving average. Unchanged is a pretty good result, given all that’s going on in the world. It would mean while the rest of the world has been going through a slowdown due to the trade friction, the US continues along at the same rate of growth as it has basically for the last year.

Note though that as usual, there’s a wide range of forecasts. The NY Fed estimates 1.2%; the Atlanta Fed estimates 1.8%; and the St. Louis Fed estimates 2.1%. Isn’t it amazing how people can look at the same numbers and come up with such different conclusions? In the Bloomberg survey, the range is from 1.3% to 3.0%. I think a figure towards the market median would be seen as reassuring for US growth and would tend to be positive for the dollar. 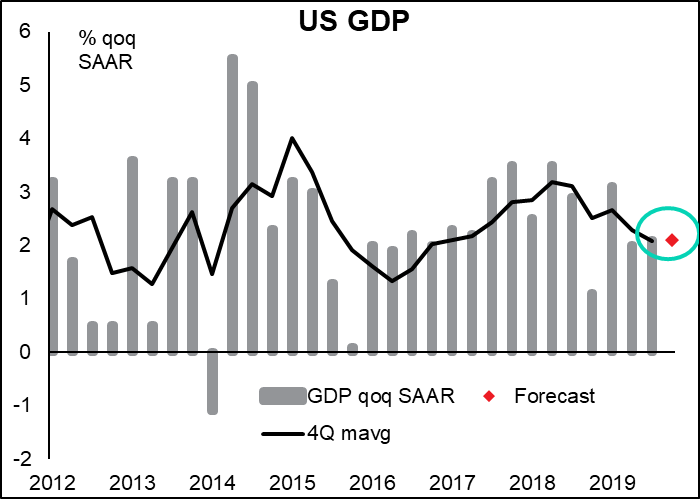 After that, it’s pretty quiet until Japan opens for business, at which point we get the monthly end-of-month data dump from Japan. The most important of these indicators is the Tokyo consumer price index (CPI). The headline inflation rate is expected to decelerate, but the Japanese-style core inflation – excluding fresh foods – is forecast to remain at the same pace, while core-core (ex fresh food & energy) is forecast to decelerate a bit. Net net, nothing really – inflation in Japan has barely budged over the last 20 years and isn’t likely to change in the next few months. JPY neutral

The other statistics are even less correlated with the change in the FX rate. The employment data is somewhat influential, but there too, no big change is expected. And to think I used to sit on a trading desk in Tokyo, calling out reactions to these indicators to the traders instantly so they could move their prices. As someone in another country once said to me, “I could be replaced by a voicemail.” 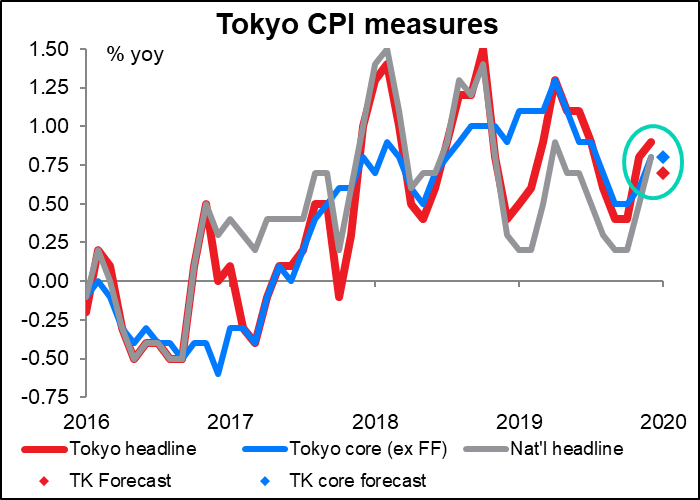 Australian private sector credit continues to decelerate. Mortgage holders are continuing to pay down debt and business credit is barely growing. Confidence has plunged and investment is weak. The foreacast is for basically more of the same. AUD negative 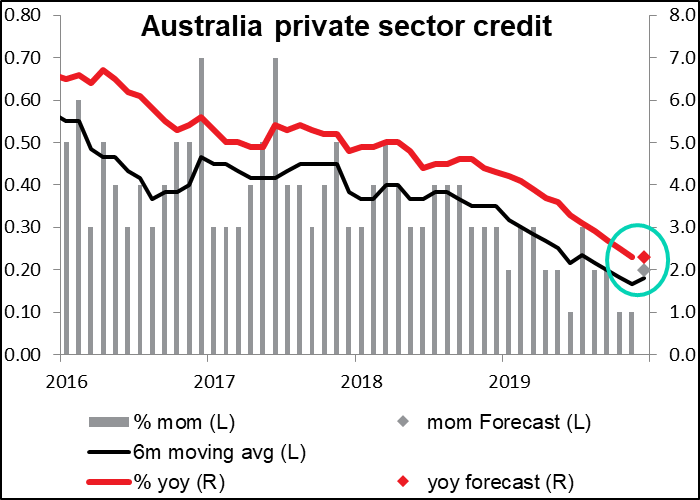 Finally, China announces its official purchasing managers’ indices (PMIs). I say “official” because it’s compiled by the China Federation of Logistics and Purchasing in collaboration with the National Bureau of Statistics, as opposed to the Caixin/Markit PMI. The official one surveys some 3,000 companies throughout the country, including many of the large, state-owned enterprises, while the Caixin/Markit PMI surveys only around 420 firms, mostly smaller, privately owned companies on the booming East Coast. So in this case I put more confidence in the official figure rather than the private-sector one. Except of course the nagging question:  can we trust the respondents to respond honestly? No comment. Assuming we can trust the figures though, as long as the manufacturing PMI is at or above the “boom or bust” line of 50, that’s reassuring and a risk-on indicator. But it may well be considered out-of-date, given the rapid development of the coronavirus since the survey was taken. 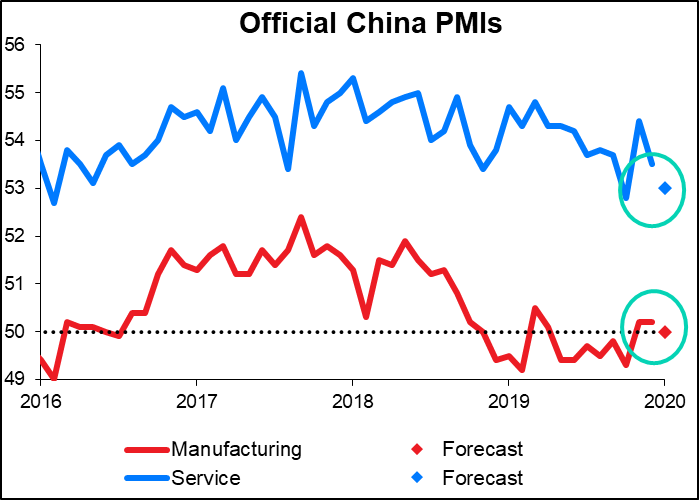 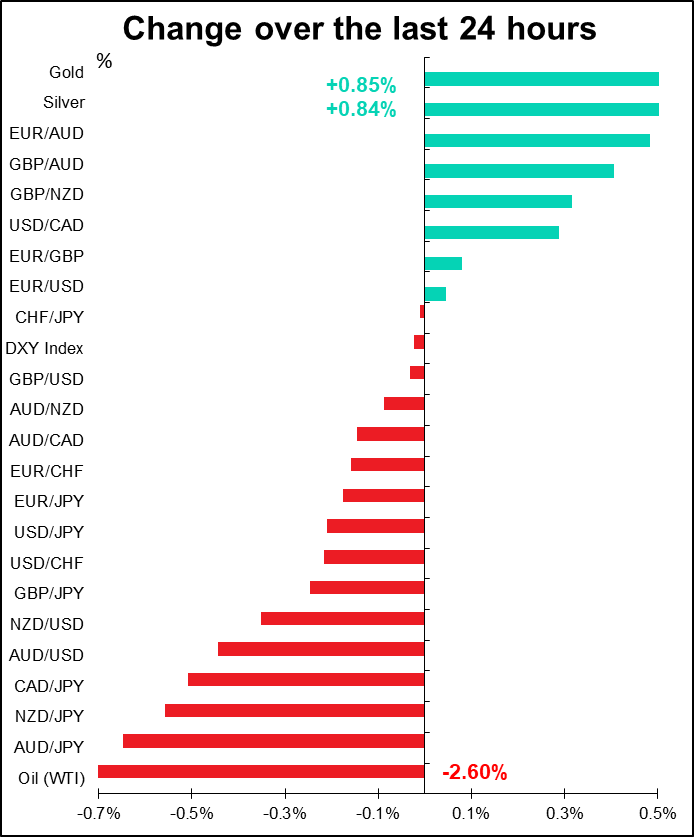