You are at:Home»MARKET PREVIEW»Currencies Little Changed in Quiet Trading; US Oil Inventories 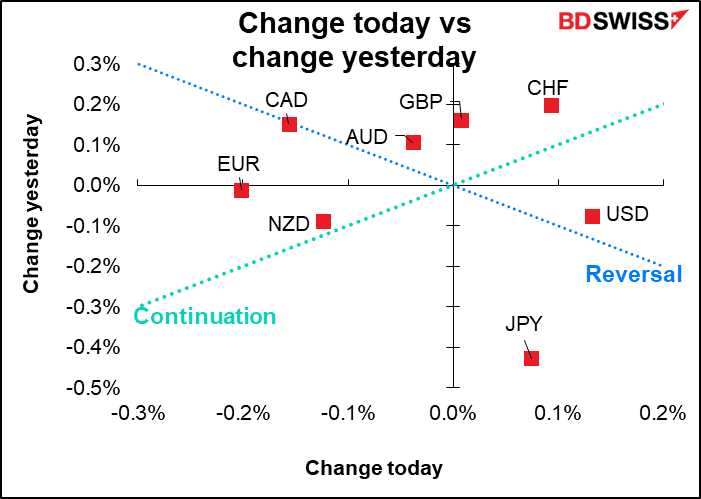 It was a really quiet day in FX yesterday – all the currency pairs I follow were ±0.2%, which normally I wouldn’t even write about as that’s just “Brownian motion” among currencies. That is, there are always some kinds of orders going through the market, such as importers buying or exporters selling or life insurance companies doing something with their overseas portfolios etc etc. So some movement may not have any real meaning to it – it’s just part of the ebb and flow of business. That looks like what we have here.

Of course since I get paid by the word I have to write something – maybe this is the day I pad my comment with recipes and old jokes and see if the Compliance Department notices? 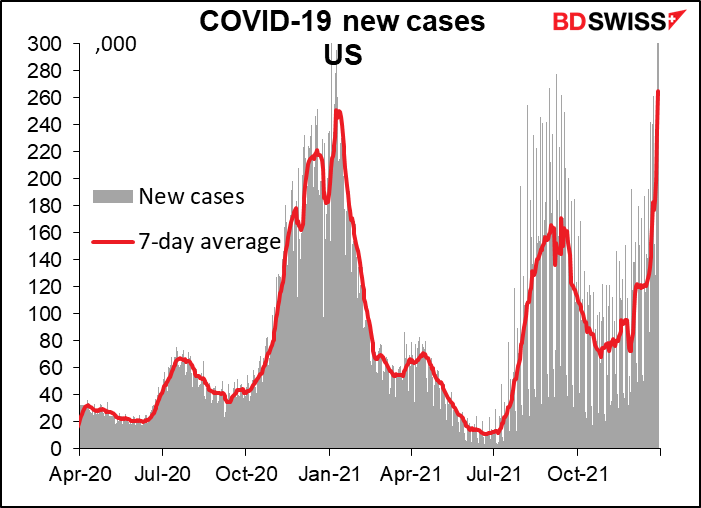 Still, the impact seems to be less than during previous outbreaks. The New  York Times reported that new cases were up 83% over the last two weeks, but hospitalizations are up only 8% and deaths up 3%.

Since the omicron variant seems to be less harmful, the US Centers for Disease Control (CDC) cut in half the isolation period to 5 days from 10 for lightly infected people, e.g. asymptomatic infections. It also took other measures to allow people to get back to work quicker. It’s hoping that these guidelines will minimize economic disruption (and no doubt political opposition) but at what human cost, I would ask? The fundamental problem is that a lot of US employees don’t have any sick leave – if they can’t work they don’t get paid. Ideally they would get sick pay while they stayed home and isolated so as not to infect others, but that can bankrupt them.

The other problem is that the US is an international outlier in vaccinations. Only 62% of the population has been vaccinated. The other 38% probably believes that the vaccine contains microchips that Bill Gates will use to track them (never mind that their phones do that anyway) or that it will magnitize them (yes really – watch the video). 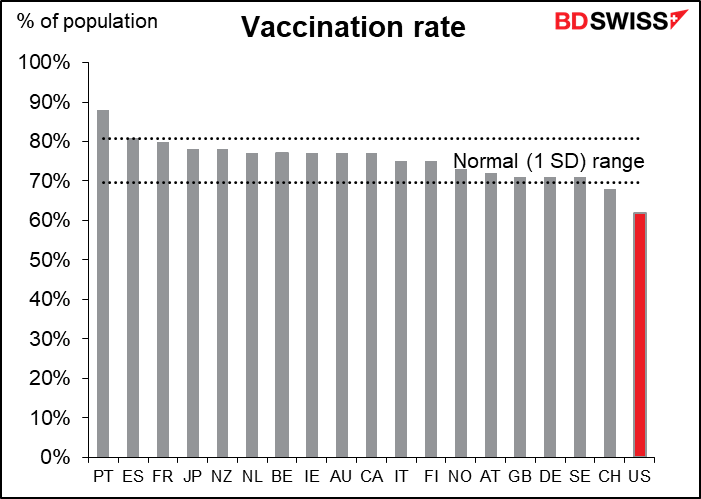 I think the virus is likely to be a much bigger problem for the US in a few weeks – whether it’s big enough to change the Fed’s tightening plans though is another question. Probably not as long as people can stay out of the hospital. That means it might not impact the dollar as much as one might expect.

Oil was up a bit – the American Petroleum Institute (API) reported another decline in US inventories of 3.1mn barrels, about in line with what the market expects for today’s US Dept of Energy figures. We’ll be watching those figures not only for the inventory data but also to see what’s happening with US oil production. Last week the DoE pegged it at 11.6mn barrels a day (b/d), up 600k b/d from the beginning of the year. Not much but it’s something. 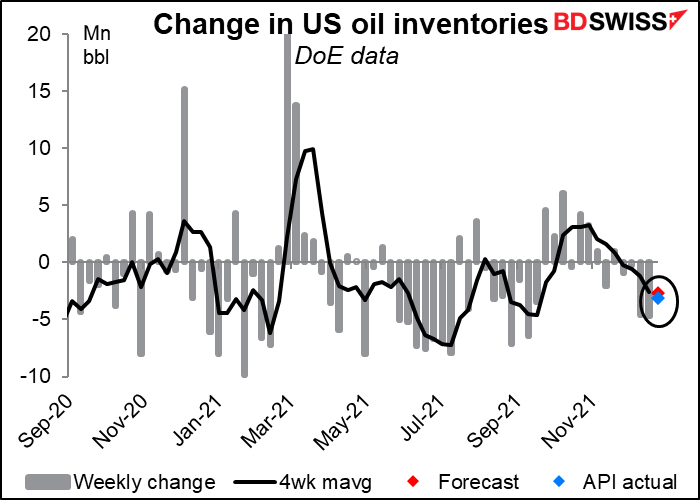 I would expect oil to continue to recover gradually as the fear of the omicron variant fades. The New York Fed’s Oil Price Dynamics Report analyses the change in the price of Brent crude and breaks it down into three reasons: demand, supply, and “residual.” Recently supply has been pushing prices up, while demand has been largely absent as a factor. The main thing moving prices has been “residual,” which in this case we can assume is fear: fear of the impact of the omicron variant on demand. As that fear wanes, the price should go up, as supply indicates (in my opinion, that is). 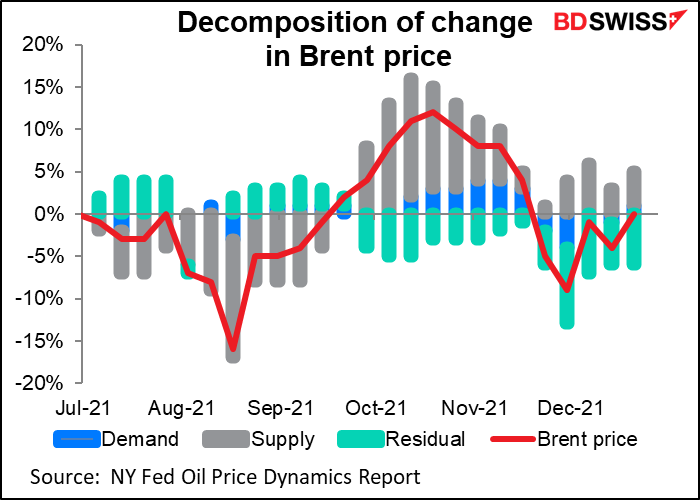 The Turkish lira (TRY) has been slowly but surely losing ground this week. From what I’ve read about the government’s plans to make sure TRY deposit holders get a return equal to that of foreign currency holders, it just treats the symptom (currency devaluation) instead of the problem (inflation). In fact it may make the problem worse by shifting the exchange-rate risk onto the government and increasing the government’s money-printing. And with deposit rates lower than the rate of inflation, the lira would have to depreciate by more than the rate of inflation for people to make a positive real return on their deposits. So they might as well borrow money and buy real assets, such as houses or cars.

The FT reported that the fundamental reason why citizens continued to prefer foreign currency was that they didn’t trust the government’s economic policies. It quoted one Turkish analyst as saying, “Why would you hold Erdogan dollars when you can hold real dollars?” 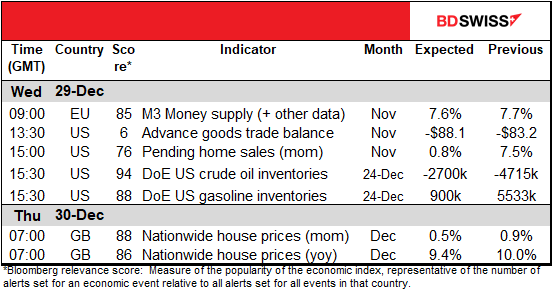 Well, today’s a bit busier than yesterday, but still I wouldn’t say it’s a “Working in the Coal Mine” kind of day. More like “Groovin” (even if it’s not Sunday).

Long gone are the days when central bankers actually cared about money supply growth being too high – the only time I’ve heard it mentioned in the last several years was in connection with the Bank of Japan’s attempts to ensure that the supply of base money kept expanding and expanding. So whether the Eurozone M3 money supply is growing 7.7% or 7.6% or whatever is probably of minimal interest to anyone. 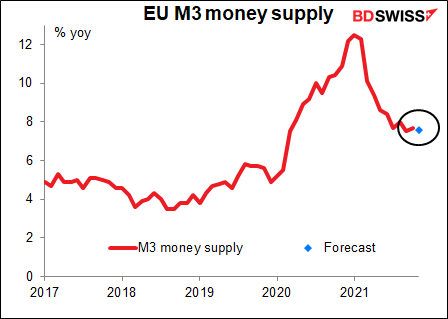 Although there does seem to be a connection between extreme periods of money supply growth (or decline) and inflation rates a year later. That may well help to explain why inflation has risen so much recently. 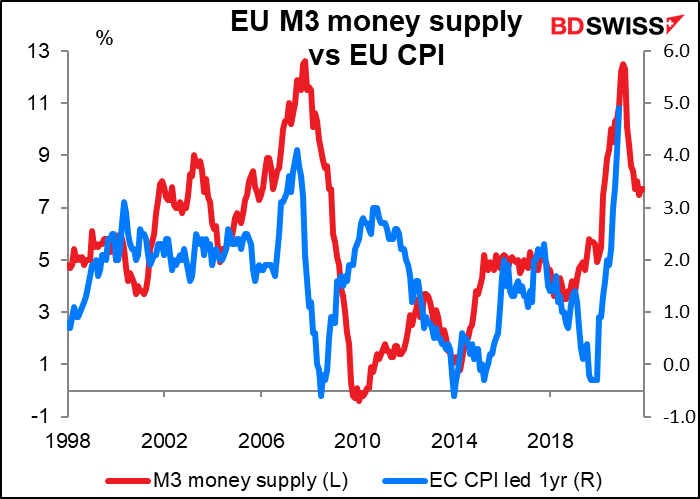 Probably the most significant of the figures coming out today is the bank lending data. The European Central Bank (ECB) wants to make sure that its targeted longer-term refinancing operations (TLTROs) are getting the money where it’s supposed to be going. Growth in lending was slowing, but has started to pick up again since May, so they may be reasonably satisfied with this progress. Still, it would be nice to see more of the borrowing coming from companies and less from people buying houses. 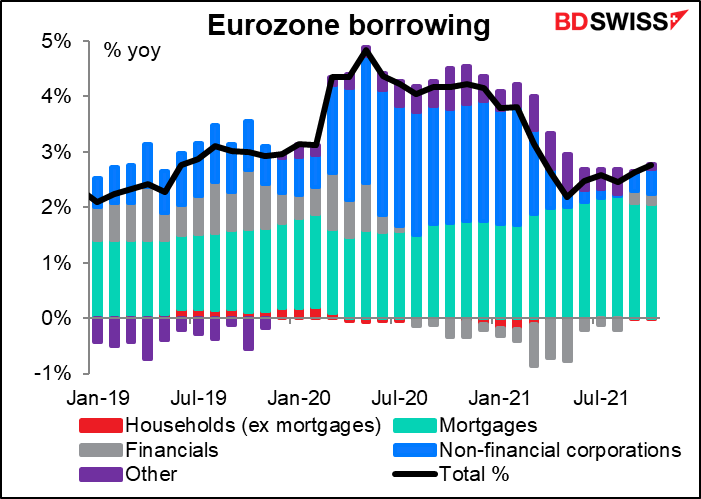 Speaking of buying a house, US pending home sales are expected to be up a paltry 0.8% mom. Maybe that’s because all the houses got bought already; new home sales during the month soared 12.4% mom. 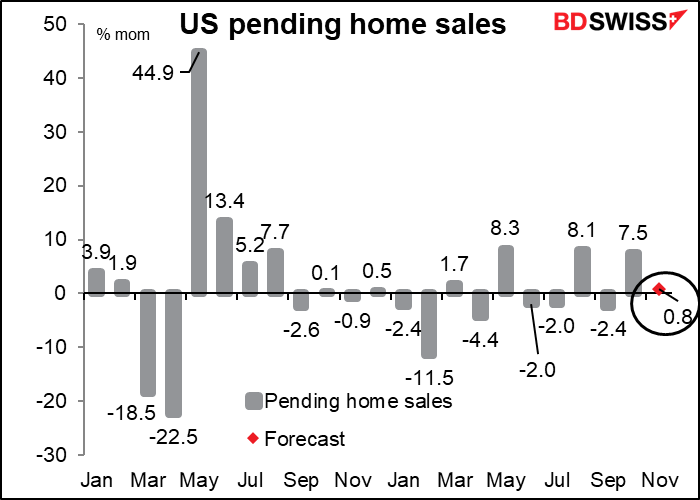 Then bright and early tomorrow morning we get the UK house prices as calculated by the Nationwide Building Society.  They’re expected to be up on a mom basis yet again. They’re rarely not up, are they? Even though the stamp duty holiday ended at the end of September, house prices continue their inexorable, ineluctable, incredible, and indeed inconceivable increase. 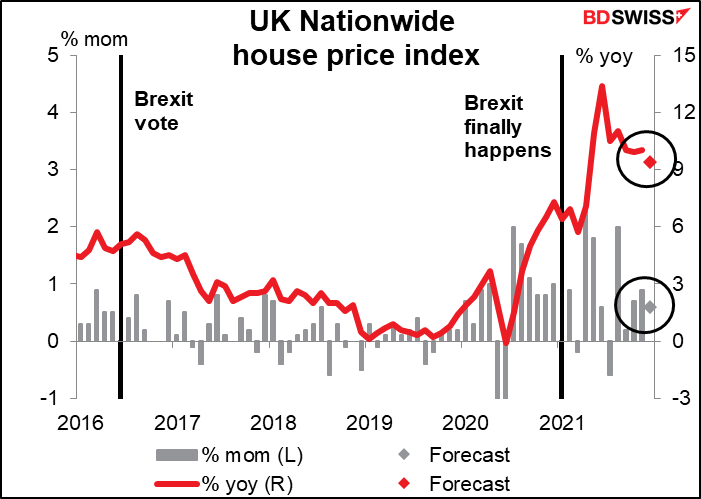 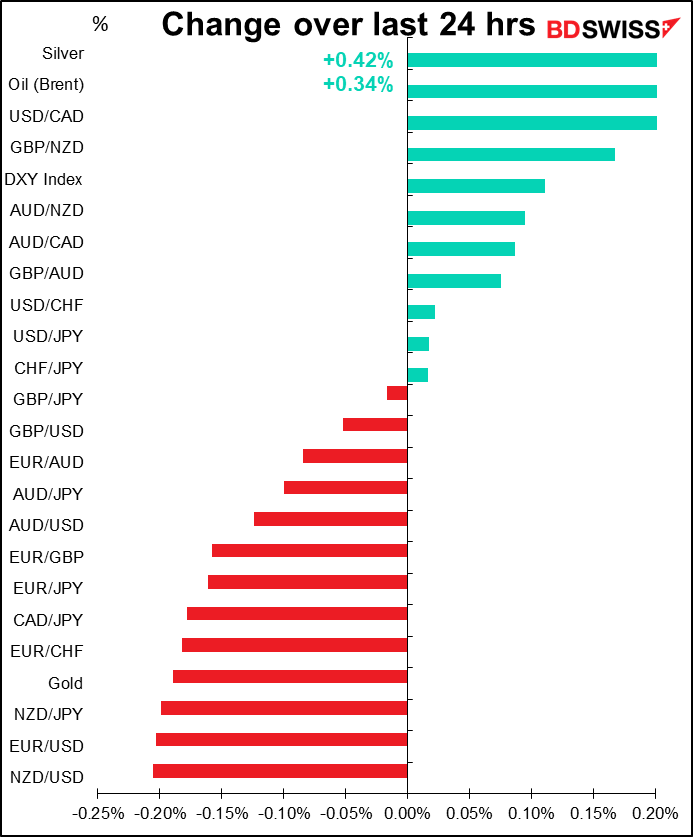