You are at:Home»MARKET PREVIEW»Currencies Little Changed Despite New Sanctions Against Russia; RBA meeting 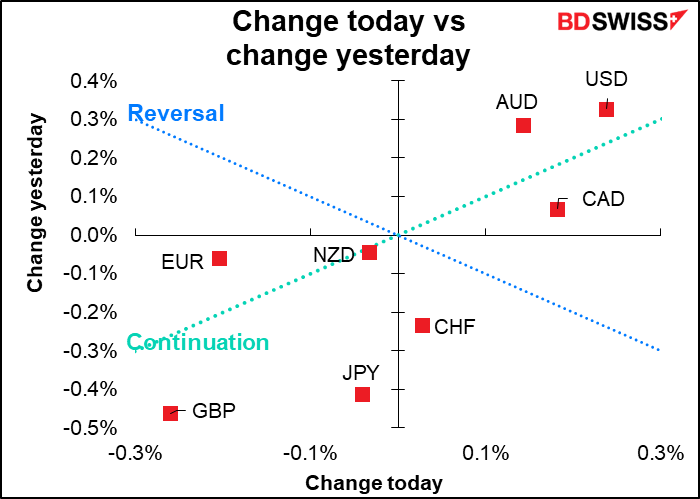 Again, it’s all about Russia and Ukraine. Although markets seem to be normalizing despite the flurry of political activity over the weekend. The Nikkei index of Japanese stocks is up 0.2% while the China CSI 300 is up 0.1%. Also note that CAD and AUD are up while CHF and JPY are barely changed. Recently AUD has fallen on risk aversion and CAD has fallen too despite surging oil prices.

There was a flight to safety in some bond markets however. European bond yields rose though, perhaps due to anticipation of higher inflation and higher government spending on defense.

The West piled on the sanctions on Russia, hitting it where it hurts – in the pocketbook. The moves aim to cut Russia off from the global financial system, lumping it together with such global economic and financial pariahs as Cuba and Iran.

Let’s look at what they did:

What are the implications of these moves?

Removing banks’ access to the SWIFT messaging system: The Society for Worldwide Interbank Financial Telecommunication (SWIFT) is like a private e-mail system that banks use to send each other instructions for transferring money. About half of all high-value payments that cross national borders go through its platform. If banks don’t have access to SWIFT, they will find it much more difficult – but not impossible – to send money abroad. (Note that SWIFT is not involved in transferring money, only in sending instructions about sending money.)

Russia is second only to the US in terms of the number of users of the platform. 80% of Russian financial institutions’ daily foreign exchange transactions of $46bn are conducted in dollars.

after Iranian banks were disconnected from SWIFT, the country lost almost half of its oil export revenues and 30 percent of foreign trade. The impact on the Russian economy would be equally devastating, particularly in the short term. Russia is heavily reliant on SWIFT due to its multibillion exports of hydrocarbons denominated in U.S. dollars. The cutoff would terminate all international transactions, trigger currency volatility, and cause massive capital outflows (emphasis added).

(although I wonder how you can have “massive capital outflows” if banks can’t send money abroad.)

The idea was first mooted in 2014. At that time, the-then finance minister, Alexei Kudrin, estimated that such a move could cause Russia’s GDP to shrink by 5%.

However, the devil is in the details — the statement doesn’t say which banks, nor whether this will stop oil and gas payments. Apparently the US is looking at exemptions for transactions involving the energy sector, probably because US consumers are already up in arms about the high cost of gasoline. On the other hand, Bloomberg reported that two of the Chinese state-owned banks have stopped financing deals for purchases of Russian commodities, which would be significant on two levels: one, that Russian commodities aren’t exempt, and two, that even Russia’s Chinese allies are abiding by the sanctions.

Assuming that the sanctions do hit Russian commodity exports… some 36% of the Russian government’s revenues come from selling oil and gas abroad. It would cripple the government’s finances and force them to resort to more deficit financing – a recipe for higher inflation if not hyperinflation, a great way to lose the support of the populace.

Restricting the CBR’s access to its reserves:  This is the “nuclear option” when it comes to financial sanctions. In theory even with private banks’ access to foreign currency cut off, the central bank could take the other side of the transactions. Now…nope! No access to dollars or euros. Elina Ribakova, deputy chief economist at the Institute of International Finance in Washington, said that “Apart from creating a domestic financial and economic crisis in Russia (massive dollarization and destruction of the domestic financial sector), it will also make trade with Russia so difficult that it will nearly impossible for some. Energy and oil prices massively impacted.” She predicts “a direct hit from sanctions to all economic activity. It is likely to come to a standstill.”

What this means is that the ruble is likely to go into freefall. On Friday, USD/RUB closed at 82.99. Over the weekend, domestic bank apps were quoting USD/RUB at 150, a 45% decline over the weekend – even before the banks open!

Freeze individuals’ assets:  This is a clever long-term move, in my view. It may help to turn the elite against Putin. Up to now they’ve tolerated, perhaps even supported, his rule as long as he kept them in champaign and caviar. But if they think that he’s now impoverishing them, they may turn against him. See Sanctioned Russian TV Host Cries About Losing His Italian Villa (somewhere the video of this is available, although it’s in Russian.)

(This has nothing to do with FX, but I’m please to say that this move should hit Trump hard as a lot of the apartments in his buildings have been sold to Russians! I can’t wait. Especially now that his accountants, Mazars, have abandoned him, most reputable banks won’t deal with him. He was probably banking on getting bailed out by Russia (which may be why he applauded the invasion as “smart” and “genius.”)

Separately, Germany’s Chancellor Scholz said Germany would set up a special fund of EUR 100bn to rebuild its armed forces. Defense spending will be raised above 2% of GDP permanently (EUR 100bn is 2.97% of GDP or 50% more than the NATO target). This is a game changer, a swift & sudden reversal of decades of Social Democratic Party policy toward Russia. Defense spending has been between 1.1%-1.5% over the last decade. Germany will also supply weapons to Ukraine, thereby breaking a long tradition of not supplying weapons to any conflicts.

Other countries are likely to follow suit. Europe will now re-arm with a clear focus and objective – certainly not what Putin imagined the results would be

Scholz also said Germany would build two LNG terminals “as soon as we can” to make the country less reliant on Russian gas.

We have to see what this means for German fiscal policy. Will they do away with the “debt brake” in order to finance this? It could mean a looser fiscal policy in Germany, which might allow the European Central Bank to tighten policy faster. EUR+

Also, the EU and Canada closed their airspace to Russian airplanes, meaning even if that guy’s Italian villa isn’t seized, he won’t be able to get to it unless he drives. We’ll have to see whether any other countries follow suit.

Finally, I said in my Weekly Outlook that the invasion might make it more likely that China tries to take over Taiwan. A blog post from the Council on Foreign Relations however argued the exact opposite: that Putin’s Aggression Against Ukraine Deals a Blow to China’s Hopes for Taiwan. “Russia’s invasion of Ukraine, by raising Taiwan’s profile, highlighting its contributions as a reliable U.S. partner, and increasing the probability of a U.S. intervention on Taiwan’s behalf, sets back China’s ambitions for Taiwan,” it said. Also the strength of the world’s reaction might give China pause.

Another week, another new graph. I never had to worry about the Russian Ruble (RUB) in the CoT report before, but this week’s it’s the hot topic.

This week’s RUB position is the new definition of the phrase “long and wrong.” Ahead of Russia’s invasion of Ukraine, speculators were long 19,517 RUB futures contracts, equivalent to some $631bn. Or at least it was before the ruble collapsed. At Sunday’s rate that’s worth only $588bn. And can these contracts even be settled now? I have no idea. 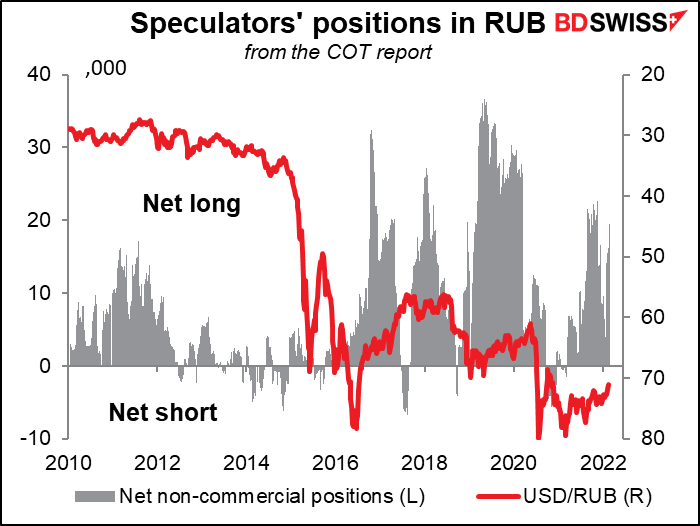 Both asset managers and hedge funds were long RUB. 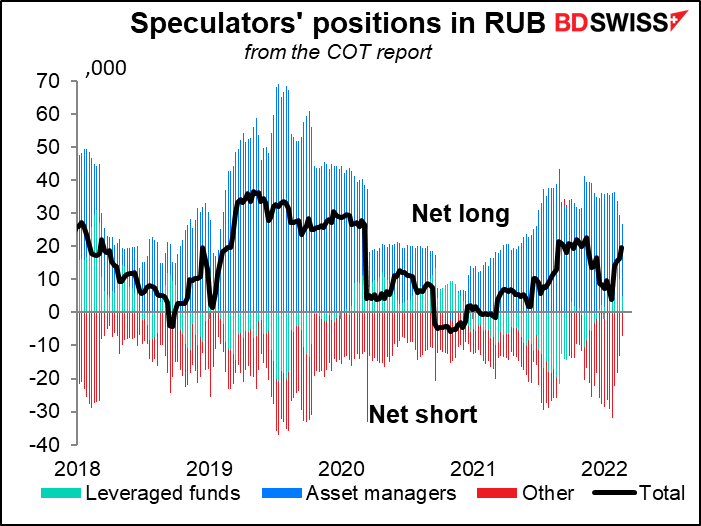 Overall the market cut its net overall long USD position by 15% to $6.1bn. Most of that came through a reduction of EUR shorts, plus a small contribution from GBP, which flipped from a small long to small short. The only other significant change was a rise in long MXN positions. 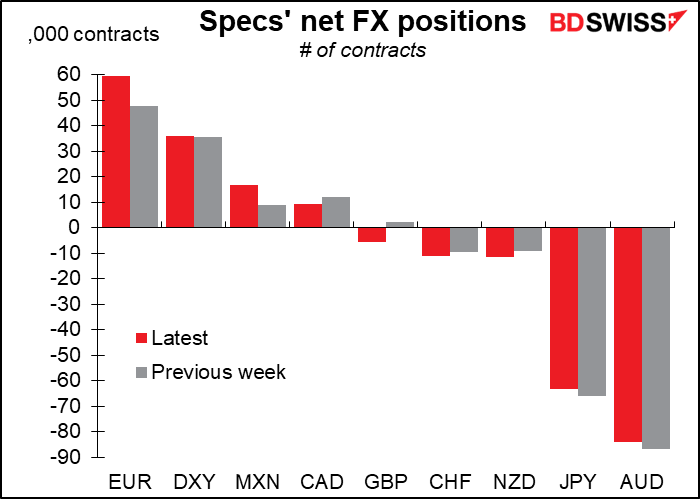 Hedge funds cut their long GBP and went flat NZD. They trimmed their short JPY and short EUR but added to their short CAD and short CHF. Retail didn’t do much. In percentage terms the biggest change was in long CAD and MXN, but it wasn’t a whole lot of contracts. 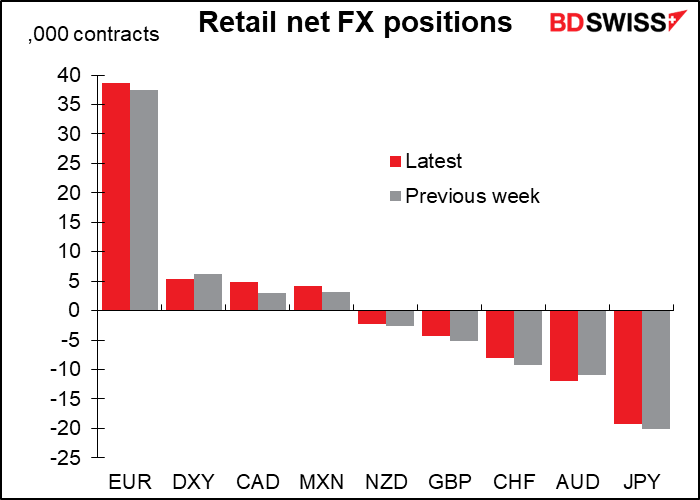 Speculators added to their long gold and silver positions 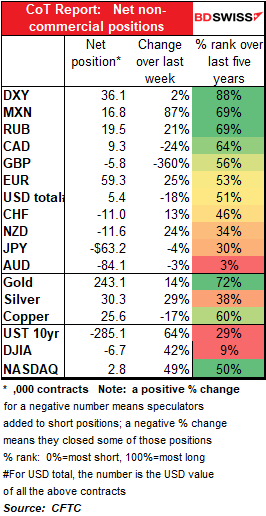 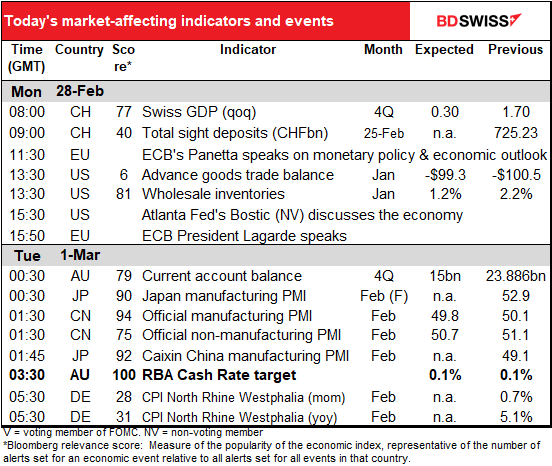 Still no sign that the Swiss National Bank (SNB) is worried about the level of the CHF. But it’s kind of eerie that EUR/CHF is now at almost the exact same level it was a week ago. Perhaps some “supernatural forces” have been at work in the FX market? 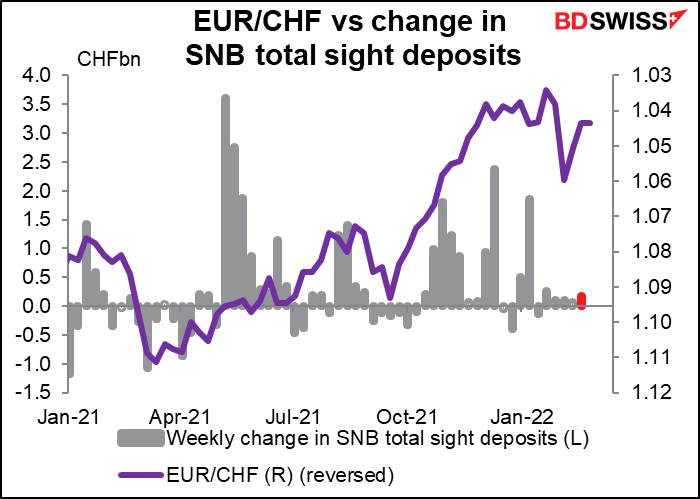 The US advance trade data is not particularly interesting to the market, if its abysmally low Bloomberg relevance score (6) is anything to go by. But since it accounts for 93% of the variation of next week’s overall trade balance data, which has a relevance score of 84, this seems like an oversight to me – we should pay more attention to it, particularly in the FX world (although nowadays financial flows are the “dog” that wags the trade “tail,” unlike the pattern many years ago).

In any case, the US merchandise trade deficit, which hit a record $100.47bn in December, is expected to narrow somewhat to a still-enormous $99.30bn, which would be the second-widest deficit ever. 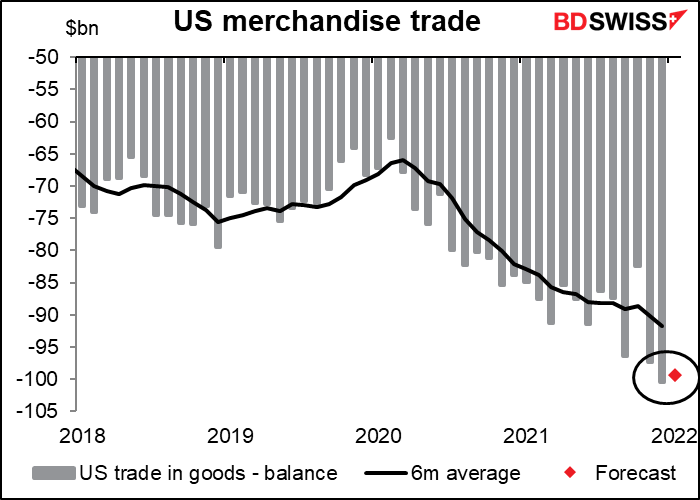 The reason is simple: the US economy has recovered faster than other countries and so US imports have bounced back faster than US exports. 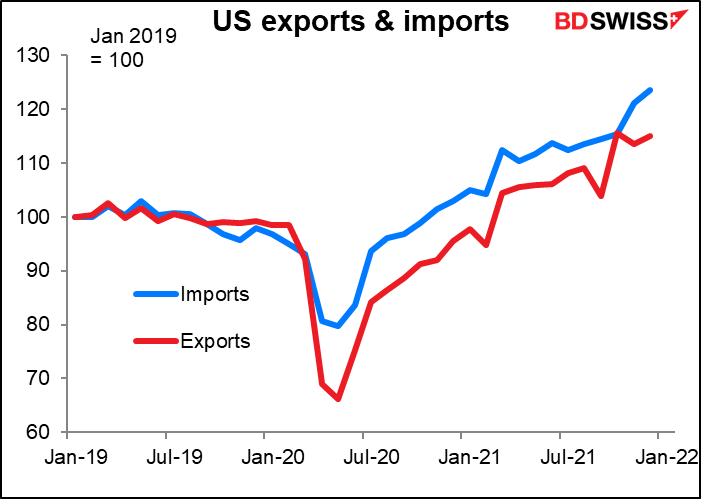 And when imports are already much higher than exports, that means a rapidly widening trade deficit.

By the way oil doesn’t have much to do with this any more; the US trade in oil is pretty well balanced. This is Pelatons and iPhones and furniture and wine and a million other imported goods. 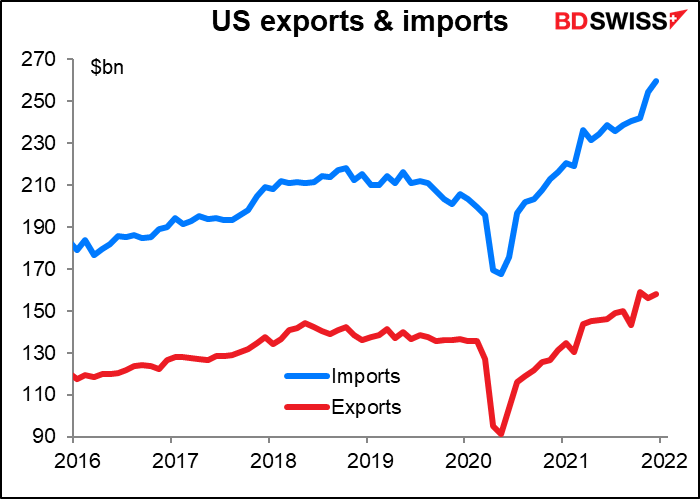 US wholesale inventories don’t seem to have that much of an impact on the FX market, but since they have a high Bloomberg relevance score I thought I’d at least include a graph so you can see the trend. 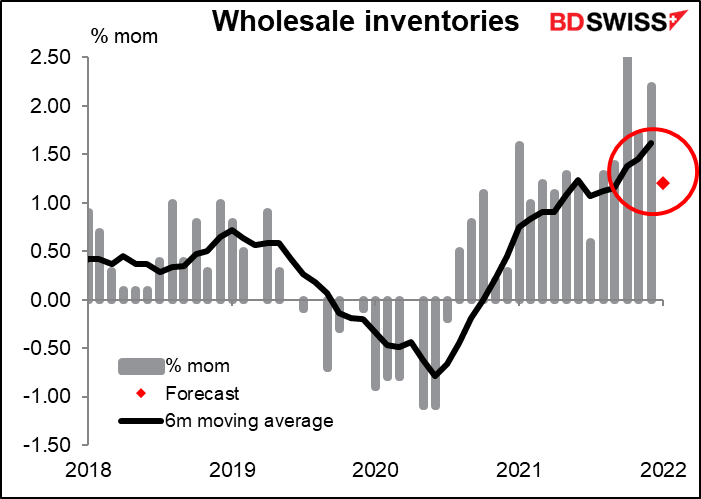 Overnight, Australia’s current account surplus is expected to fall notably in Q4, but at least it’ll still be in surplus for the 11th consecutive quarter – a record (actually 10 quarters was a record, so 11 will of course be a record too.) Higher commodity prices boosting export earnings has been the reason for the continued surplus.

The trade surplus fell to AUD 29bn from AUD 37bn in Q3. Export earnings fell because of both lower volumes and lower prices.

I’m not sure this will affect currencies much ahead of the Reserve Bank of  Australia meeting in a few hours. 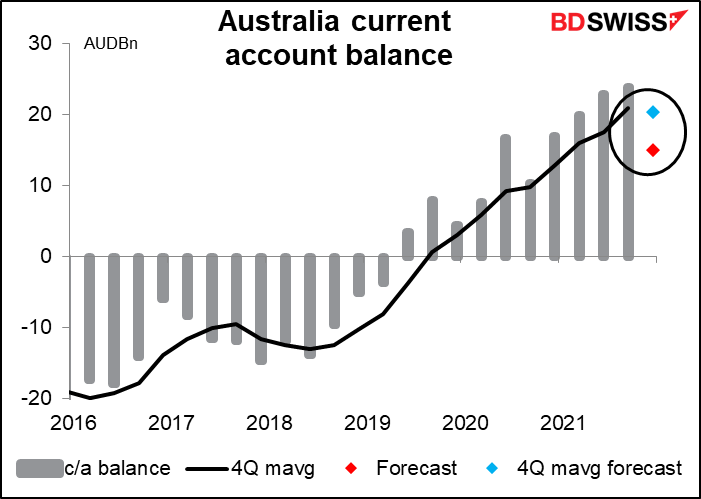 China’s official purchasing managers’ indices (PMIs) are expected to show little change, as usual. But what little change they are expected to show is supposed to be lower. In particular, the manufacturing PMI is forecast to be below the crucial 50 line, the demarcation between expansion and contraction. This might dampen enthusiasm for AUD, especially after the falling current account surplus focuses attention on the currency’s dependence on trade. 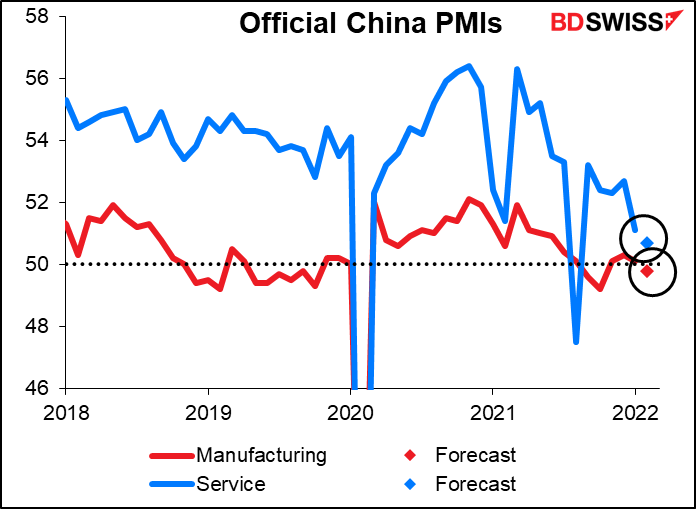 Finally we come to the Reserve Bank of Australia (RBA) board meeting. It’s likely to be a non-event for market participants. The market doesn’t expect a change in rates until the July meeting at the earliest. Nor is there likely to be an announcement on the bond purchase program at this meeting, as that’s scheduled to be decided at the May meeting. Nor has the data since the last meeting done anything to change their view – on the contrary, the weaker-than-expected increase in wages in Q4 will only confirm their narrative that higher wage pressures are necessary to get inflation into its target range sustainably. All in all the tone of the statement should be little changed from February and therefore have little impact on the currency. 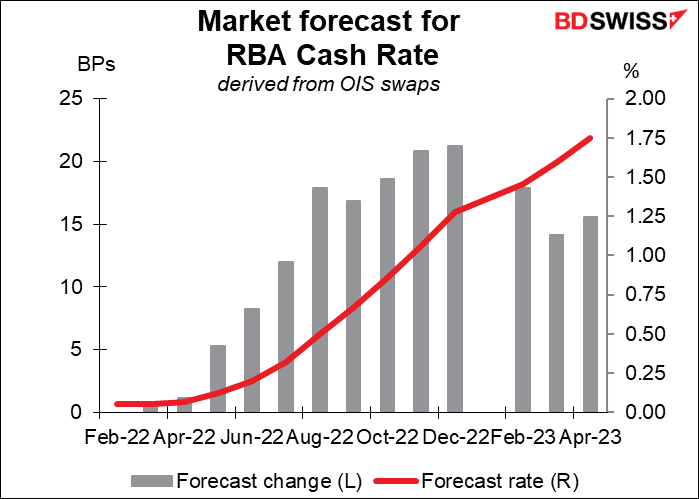 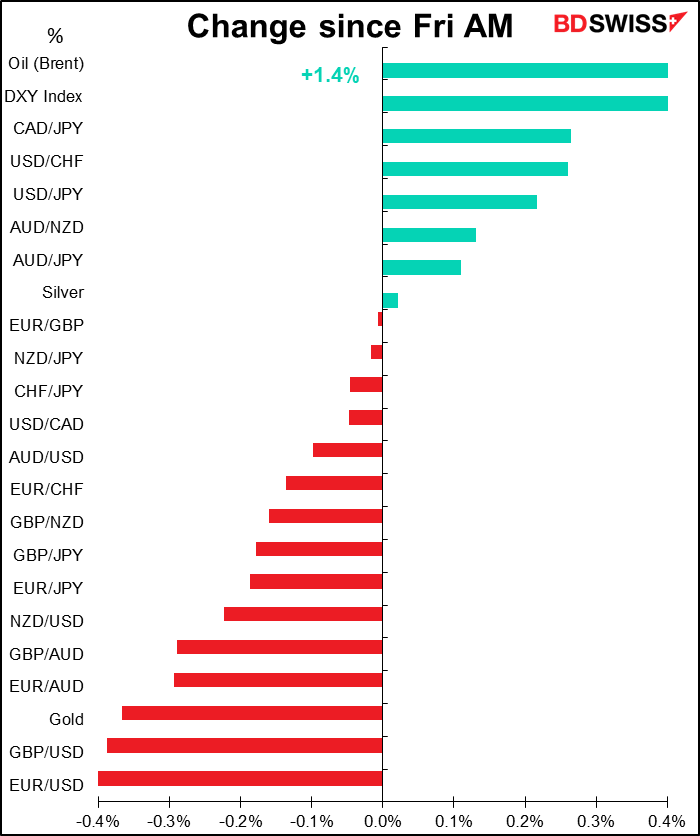