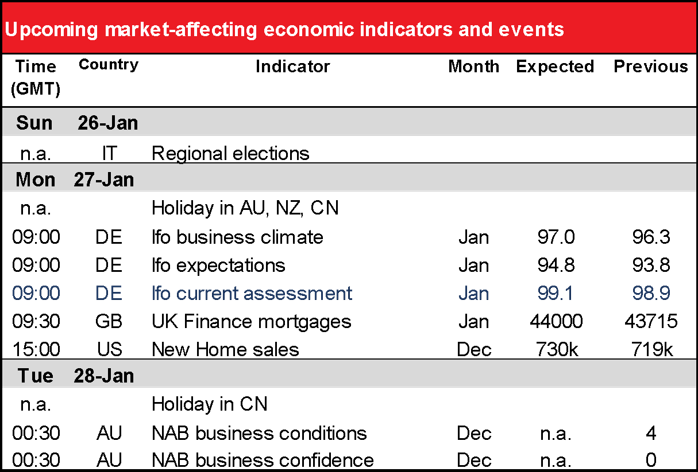 The week is starting out with a classic “risk off” move as the unknown and unmeasurable threat of the coronavirus dominates the news. Precious metals up, oil down, JPY and CHF up, AUD and NZD down. Nothing much more to say about the currencies – you could probably have predicted the order of the chart above beforehand (except maybe knowing where to put GBP).  I liked this tweet from WSJ reporter Mike Bird: 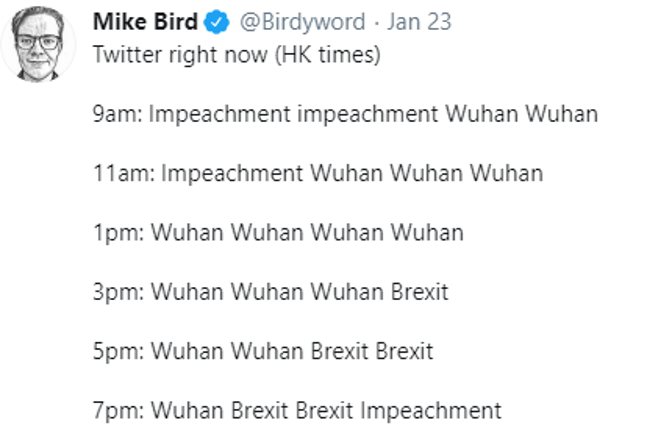 I don’t feel it’s my job to re-write newspapers, so I suggest you look at whatever paper or new source you read to follow the coronavirus story. Just a word:  it looks potentially very bad. But so did SARS  and so did ebola and so did bird flu and most of us are still here – although this disease may be worse than SARS, because it’s contagious during its incubation period, when people don’t show any symptoms, while SARS was not. So it might spread faster. China has quaranteened the entire city of Wuhan and extended the Lunar New Year holiday by two days to 2 February to help stem the spread. I’d also suggest you look at this story:  Virus-hit Wuhan has two laboratories linked to Chinese bio-warfare program. No idea if there’s any connection, but it’s worth noting.

Oh, and the US Embassy in Baghdad was hit by rockets, but oil is down over 5% anyway.

In the Italian regional election yesterday, a group led by the Democratic Party, a paterner in Italian PM Conte’s coalition, won with a small margin. Another group headed by Salvini’s League lost. The result will boost PM Conte and make a new election less likely. In theory it’s good for the euro, but I don’t think people are paying much attention to the perennial problems of Italian politics when the most populous country in the world suddenly looks like the plot of a horror movie come to life.

The day starts with the well-known CORONA, the German home-grown equivalent to the purchasing managers’ indices (PMIs). These are all expected to show continued improvement, much as Friday’s PMIs for Germany did. Of particular noted is the forecast sharp improvement in expectations. While this would ordinarily be good news for the euro, I think it’s probably well discounted after Friday’s sharp rise in the German manufacturing PMI. EUR neutral. 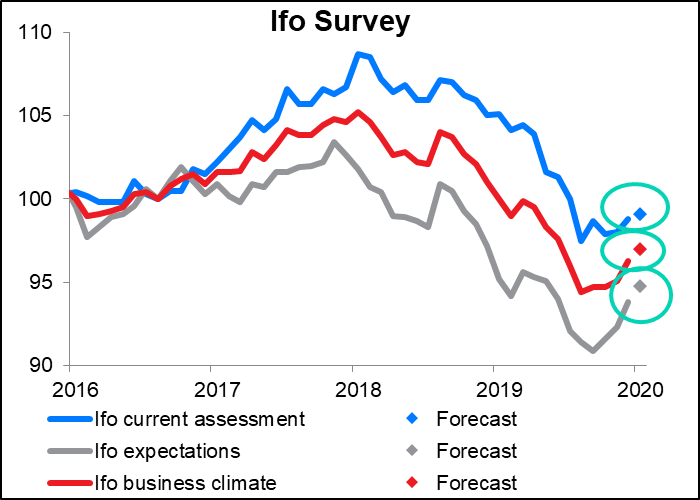 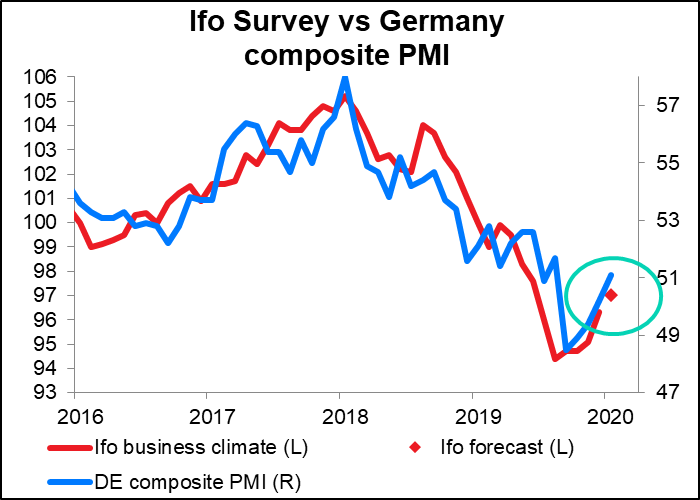 UK mortgage approvals are set to rise further. Today’s announcement, by the industry group UK Finance, is forecast to be up by 0.65%, while Friday’s Bank of England announcement is forecast to be up by 0.9%. Presumeably economists think the BoE figures should be catching up to the UK Finance figures, although personally I think since the BoE figures encompass a larger number of lenders, eventually the UK Finance figures are likely to slow down and come back more in line with the BoE numbers. In any case, rising mortgage approvals are a sign of rising confidence among Britons, who could easily be forgiven if they all decided to sell their houses en masse and move to the Falkland Islands at this point in their history. In that respect it’s positive for the pound. 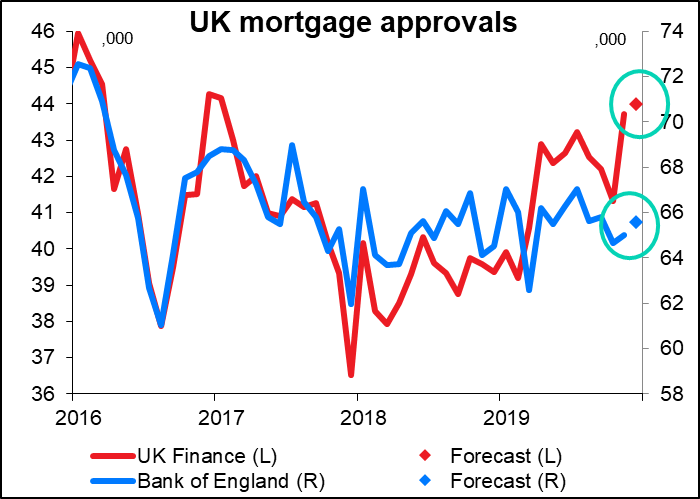 US new home sales are expected to be higher. Estimates have been revised up after last week’s strong existing home sales, which rose more than expected to a 5.54mn annual pace from 5.35mn (estimate: 5.43mn). (The fact is though that the two series are totally uncorrelated on a month-to-month basis – since 2010 they’ve moved in the same direction only 48% of the time, which is about as close to random as you get.) 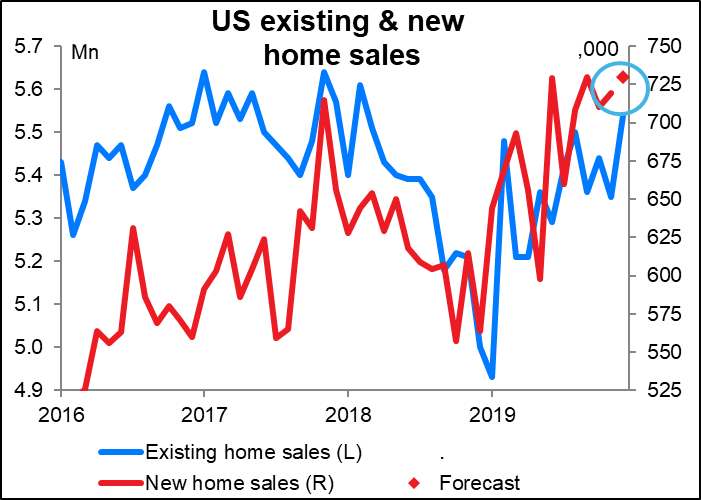 It looks like lower interest rates are indeed helping the US housing market. USD bullish. 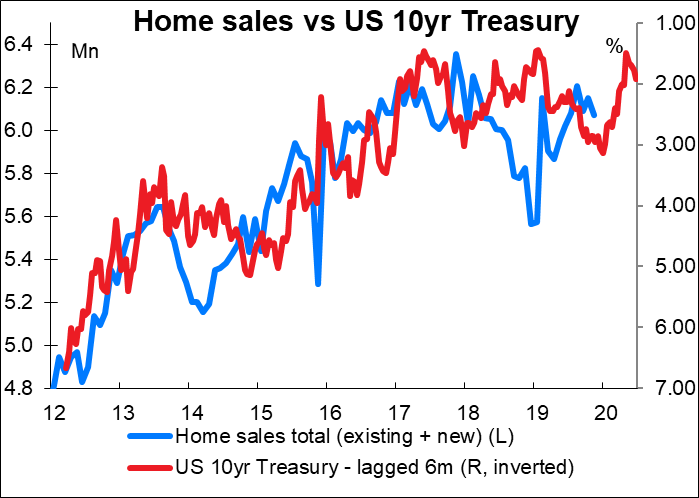 After that there’s nothing on the sked until Australia comes in, and even then it’s a second-tier indicator. The market sometimes moves on the National Australian Bank (NAB) business indicators, but nobody bothers forecasting them. I just write about them because I get paid by the word and I want to buy an expensive new PC with an ASUS Dual-RTX2060 graphics card and Samsung 970 Evo Plus SSD and…

Both of these diffusion indices are hovering dangerously close to the 0 line, which represents the line at which the positive and the negative responses are balanced. A negative figure would indicate that sentiment has turned negative, which could be a negative for AUD. 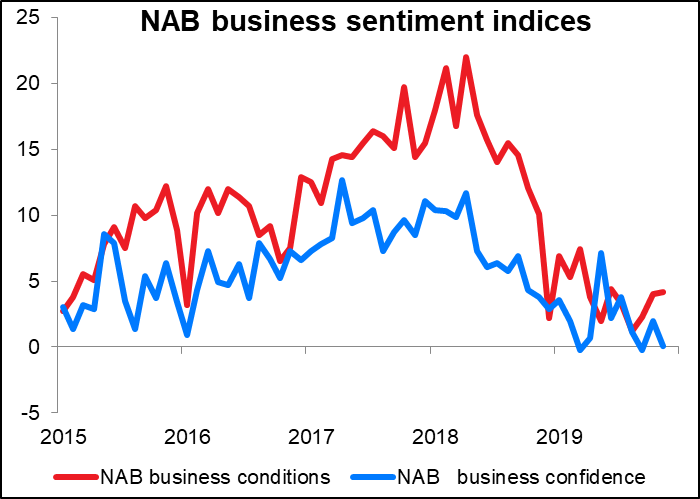 It does seem though that this indicator is probably more influenced by the level of AUD/USD than AUD/USD is influenced by it. Although I haven’t tested this hypothesis statistically, the notable inverse relationship between the two would suggest that confidence improves as the currency weakens, because the opposite hypothesis – improving confidence causes the currency to weaken – isn’t reasonable. 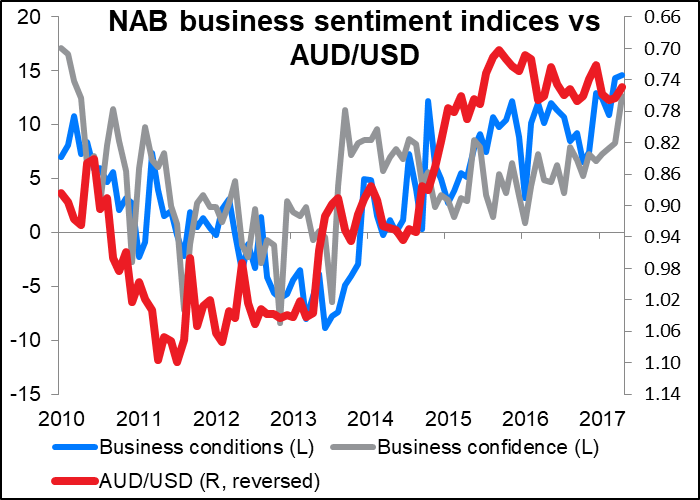 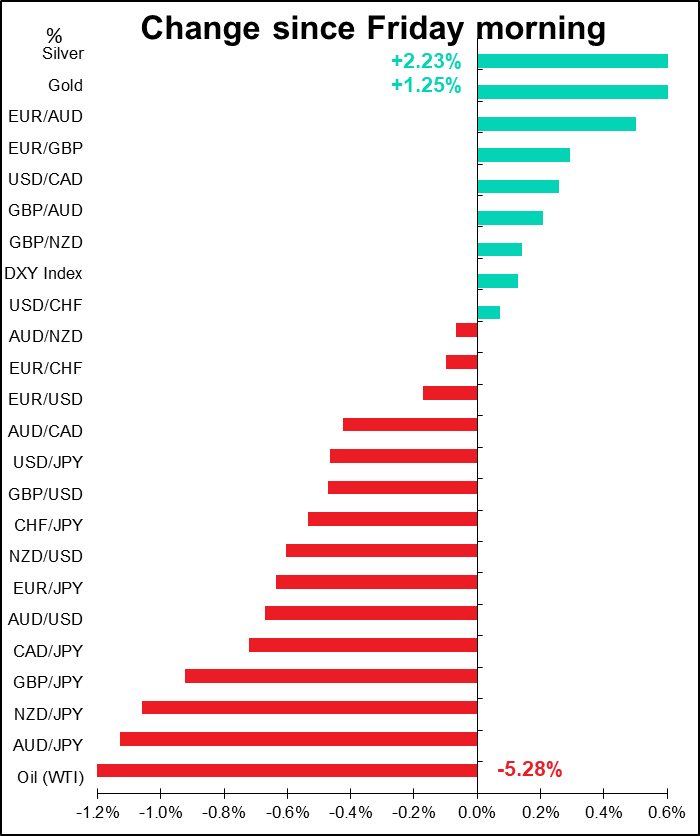