You are at:Home»MARKET PREVIEW»Commodity Currencies Up on “Risk on” Mood; ISM Non-Manufacturing 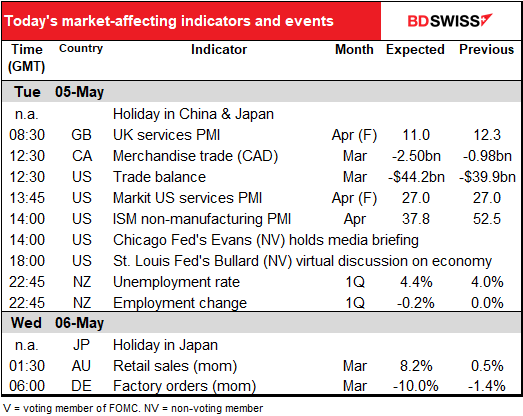 As usual, if you tell me what the S&P 500 did yesterday, I can predict pretty well not how currencies did. Since the S&P 500 was up 0.4% and NASDAQ up 1.2%, this morning AUD, NZD and CAD are up, in that order. See the table of correlations that I published yesterday. Correlations with S&P 500: AUD/USD: 0.41, NZD/USD 0.30, USD/CAD -0.42. So actually, CAD should be up more than NZD today, particularly as oil had a great day: WTI up 14.7%, Brent up 7.5%. CAD is following oil (see graph) but perhaps is held back by its dependence on the US, where the economy is not recovering as fast as China, the main engine of growth for Australia and New Zealand.

The Reserve Bank of Australia (RBA) met today and, as expected, remained on hold. It widened the range of collateral that it will accept for its open-market operations but otherwise kept things pretty much the same. It repeated its forward guidance that “The Board will not increase the cash rate target until progress is being made towards full employment and it is confident that inflation will be sustainably within the 2–3 per cent target band.” I doubt if this was a major factor in today’s market.

California, the first state to go into lockdown, announced it would allow some businesses to reopen on Friday, including some retail, manufacturing, and logistics businesses. This has helped the “risk on” mood today and probably done more for AUD than the RBA did.

The other anomalies this morning are that JPY is up too and that EUR is down. How is JPY up in such a risk-on environment? I can only assume it’s the absence of hedgers in Tokyo from the market because of the Golden Week holiday. Still, it seems like an anomalous move that’s likely to be reversed.

The weak EUR may be due to concerns about today’s German Constitutional Court ruling (see below). It could also stem from the sharp falls in European stock markets yesterday as Europeans returned from their Labor Day holidays on Friday and sold, sold, sold (Eurostoxx 50 -3.8%, CAD -4.2%, DAX -3.6%). EUR/USD hasn’t been following stock markets very closely this year, but there’s been more correlation recently. 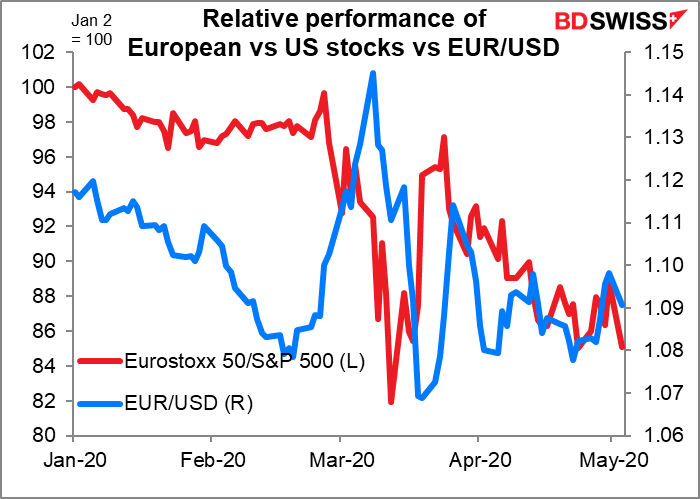 The pound’s trade-weighted index was up today, but that was mostly due to weakness in the euro rather than any GBP strength. On the contrary, my sources say there was considerable selling of pounds from hedge funds and other financial firms, although exporters and importers were buying. I still say the outlook for Britain and the pound isn’t good:  British companies have filed some GBP 8bn in virus furlough claims, which implies about 10% of the UK workforces have been furloughed, and there haven’t been any signs of reopening the economy any time soon. The US and UK start trade negotiations today by videoconference.

The wild card today is that the German Constitutional Court will rule on whether the ECB’s Public Sector Purchase Program (PSPP) complies with the ECB’s mandate and the EU treaties, which prohibit the monetary financing of member states. (Please note that this is different from the Pandemic Emergency Purchase Program (PEPP), the recently announced program to finance the recovery from the pandemic. The PSPP is the ECB’s quantitative easing program – you can read more about it here, if you’re interested.) The original case was actually filed back in 2015, shortly after the ECB started its original asset-purchase program. The European Court of Justice already ruled in 2018 that the PSPP is legal,  but also emphasized the importance of the limits that are included in the PSPP but that have been relaxed under PEPP.

Should the court rule against it, the ECB could have some difficulties in implementing its policies. I doubt though whether they will rule it illegal – in the past the court has seemed reluctant to overrule what the politicians want to do, whether it’s strictly legal or not – but there’s always that one time that they push back.

Today sees the release of the services purchasing managers’ indices (PMIs), including the final versions for those major industrial countries that have preliminary versions. Usually they aren’t revised very much, although recently there have been bigger revisions because of the virus crisis. Still, they’re not that market-affecting.

After that we have to wait till North America wakes up and we get the trade data from Canada and the overall trade balance from the US (US merchandise trade alone was released a few days ago).

Canada’s’ trade deficit probably widened sharply as oil prices fell – no surprise as energy accounts for 21% of the country’s exports. Motor vehicles and parts account for another 14%, and US auto sales are plunging – they fell from 16.8mn vehicles in February (annualized pace) to 11.4mn in March and a further 8.6mn in April. Canadian exports seem bound to fall further unless Americans start eating a whole lot more pancakes with maple syrup. 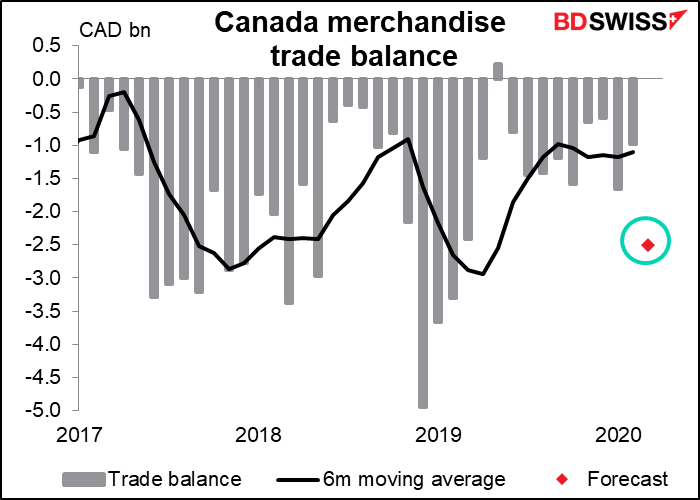 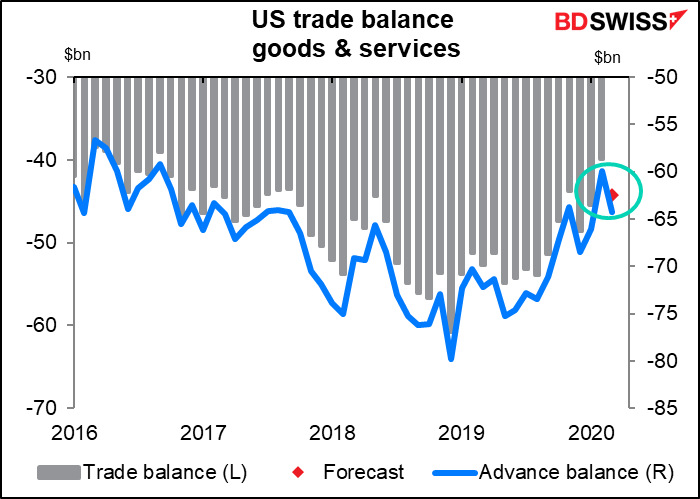 The same picture appears around the world, including major exporters such as China, Japan and South Korea. So if many countries’ exports are falling, that means someone’s imports must be falling, no? So someone’s trade balance should be improving. Who’s that? The big one I found was Europe. That doesn’t seem to be doing much for the euro however. 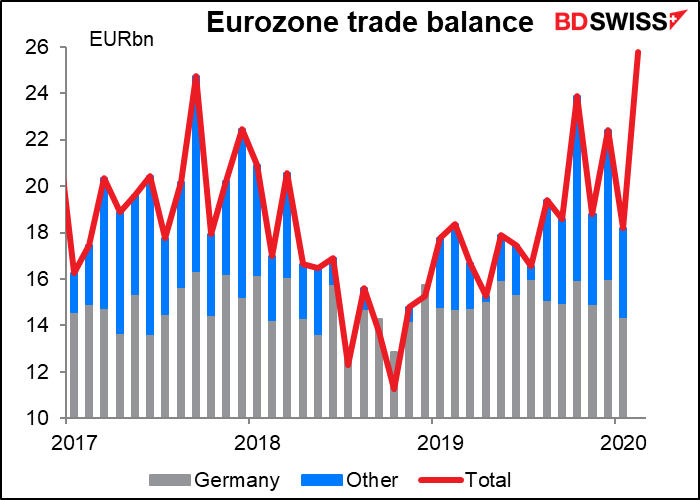 The Institute of Supply Management (ISM) non-manufacturing purchasing managers’ index (PMI) is expected to fall sharply, but not as much as the Markit service-sector ISM has. We’ll see about that. The ISM asks their survey group (who are members of their organization) about their business in general, not just their domestic business. Countries outside the US went into lockdown earlier than the US and so probably are in worse shape than the US, so we could see a downside surprise here. 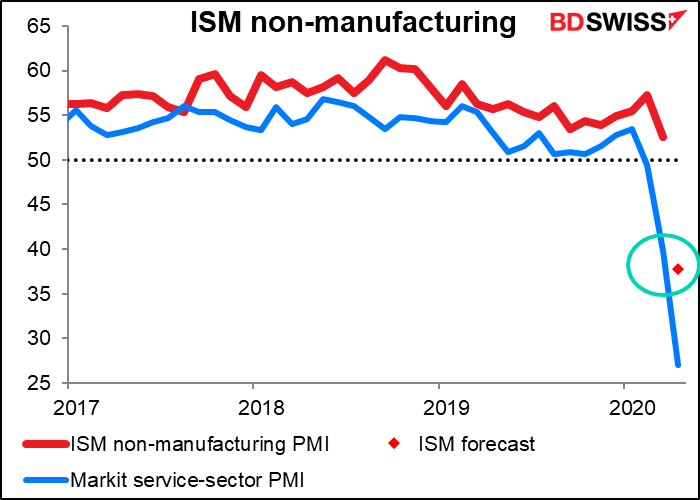 Overnight, New Zealand announces its Q1 employment data. This is really calm-before-the-storm stuff as NZ didn’t go into lockdown until 25 March, so the effects won’t be felt until the Q2 data comes out. 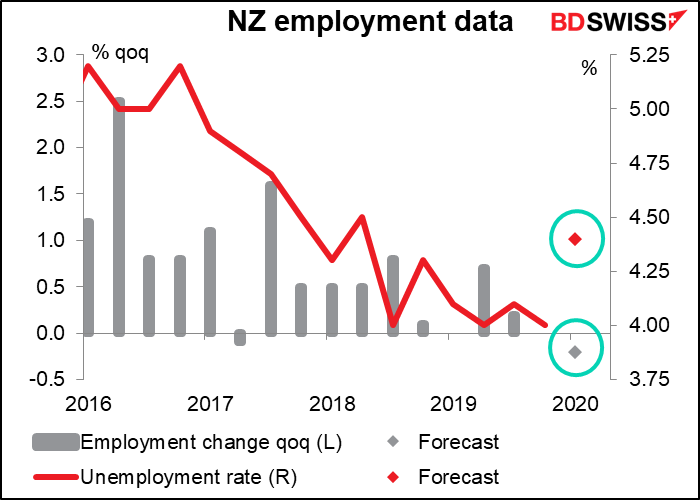 Australia’s retail sales are forecast to show a stunning +8.2% mom increase. Although that would be a record high mom increase (the previous record was +8.1% mom in June 2000, ahead of the imposition of a Goods and Services Tax, which was followed by -10.6% mom the following month), this isn’t just a wild guess – the Australian Bureau of Statistics (ABS) already issued a preliminary estimate of…wait for it…+8.2% mom. The ABS reported “unprecedented demand in March in the Food retailing industry,” with sales of some items double their usual volume. Demand for home office products was also strong. On the other hand, there were big falls in cafes, restaurants and some other retailers, as social distancing was imposed during March. The ABS started producing a preliminary estimate in February. It’s based on returns covering 80% of retailers and comes out two weeks before the official figure. The February estimate was pretty close: +0.4% mom vs the final figure of +0.5% mom. 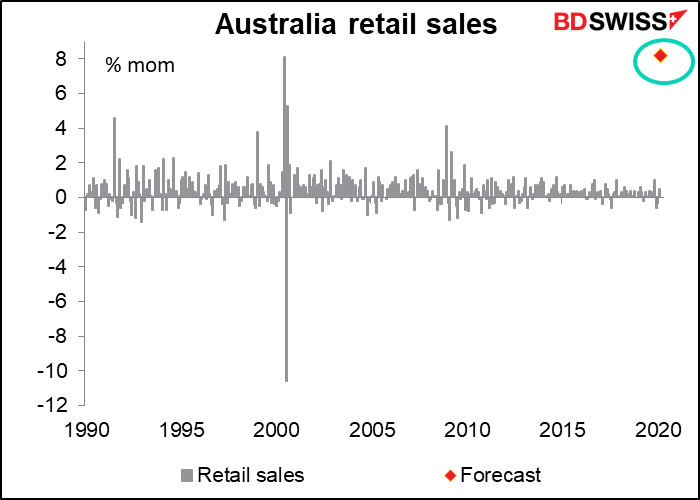 And in Europe, before I can manage to get this piece done, Germany will announce its factory orders. It’s expected to show a record fall of 10.0% mom. The previous record was -7.5% mom in January 2009, but of course that was part of six consecutive months of decline. The expected yoy rate of decline, -10.2%, is nowhere near the record -36.4% yoy drop in February 2009. Anyway, the figures are expected to be bad. Really bad. Like everything else nowadays. What else do you expect? How many synonyms for “bad” are there? Atrocious, awful, crummy, dreadful, lousy, poor…You name it, we’re going to see it over the next couple of months. 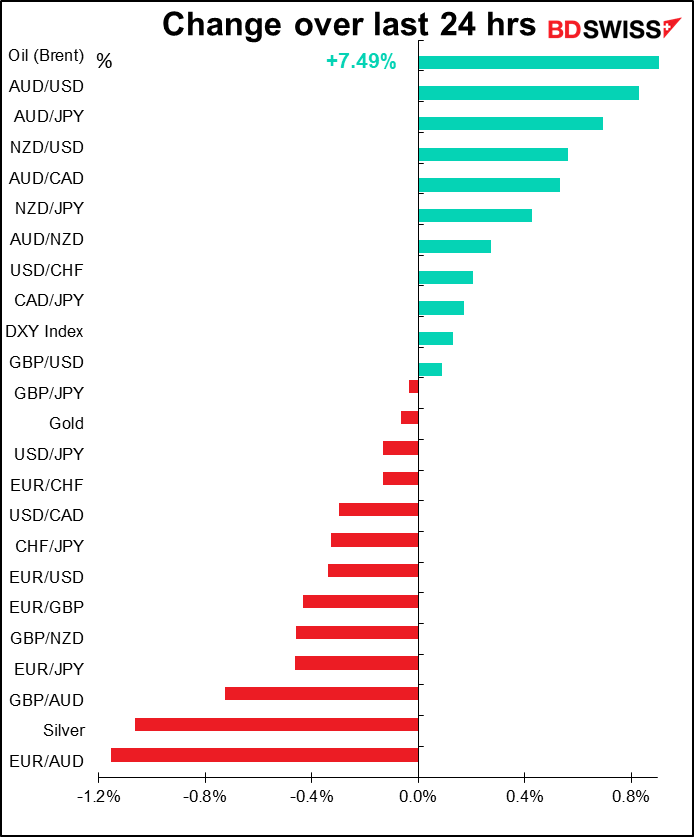