You are at:Home»MARKET PREVIEW»Commodity Currencies Up, JPY Down as Stocks Gain; Australia CPI

The Bank of Japan (BoJ) meeting went quite as expected. Policy remains on hold, as it’s likely to be for the remainder of the Anthropocene Epoch. They upgraded their view of the growth outlook, as nearly every other central bank has done (albeit just slightly). Uniquely though they cut their forecast for inflation this FY to 0.1% from 0.5% (as expected, due to lower mobile phone costs). Oh dear. Every other country is facing rising inflation due to base effects and higher oil prices, but not Japan! 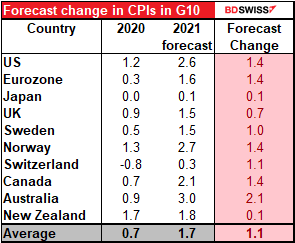 So much for “money printing will cause hyperinflation.” Japan has been engaging in aggressive quantitative easing for 20 years now (since March 2001) and this is the result! 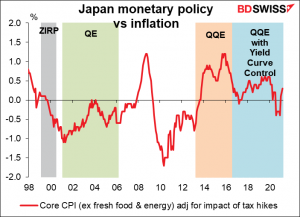 Later ,BoJ Gov. Kuroda commented that the 2% inflation target will be achieved in 2024 or later, i.e. after he leaves office in April 2023 (if at all). Gov. Kuroda is certainly the Chiang Kai-Shek of central bankers, perennially pledging to “retake the mainland” while having no realistic hope of doing so.

The BoJ meeting was not the immediate cause of the yen’s weakness today however. If anything, the currency strengthened slightly afterward, presumably on a “sell the rumor, buy the fact” response. Rather, JPY seems to have been responding to the general risk appetite in the financial markets.

At the other end of the table was AUD, the main gainer of the day. That was clearly trading on risk appetite, at least during the Asian day. It then held onto those gains during European trading even as the S&P 500 dipped, only to resume its ride later on. 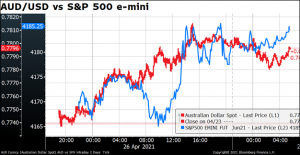 The combination of the two was a notable rise in AUD/JPY. 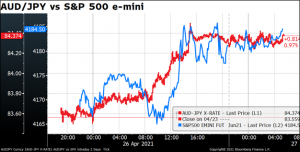 The biggest gainer of the day though was CAD/JPY. Don’t pay any attention to the table of trade-weighted indices above, there’s some problem with the CAD TWI and it’s not updating. 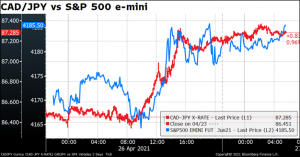 What’s driving risk sentiment? There seems to be more hope of a return to normality after European Commission President von der Leyen said over the weekend that US travelers who are fully vaccinated against the virus should be able to travel to the EU over the summer. “…the situation is improving in the United States, as it is, hopefully, also improving in the European Union,” von der Leyen said. Travel-sensitive stocks and cyclicals led the advance as investors rotated out of safer, more defensive industries, such as household products and food staples, and into risker, more cyclical industries such as semiconductors, banks, and retailers. Both the S&P 500 (+0.2%) and the MSCI World index (+0.3%) moved further into record territory. The change in focus didn’t hinder the tech stocks though as the NASDAQ (+0.9%) similarly closed at a record high. 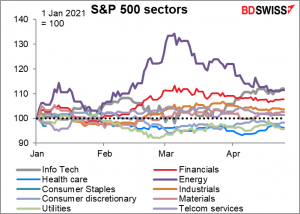 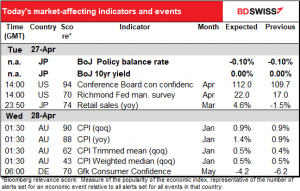 The big excitement of the day, the Bank of Japan Policy Board meeting, is over.

Nothing particularly riveting scheduled for the European day.

The US Conference Board consumer confidence index is forecast to continue its rebound. It’s expected to outperform last week’s U of Michigan consumer sentiment index. It’s no surprise to me that confidence is coming back in the US, what with the economy booming, jobs increasing, vaccinations proceeding far faster than anyone dreamed, and the stock market near a record high. Oh, and $1,400 checks sent out to most everyone in March. 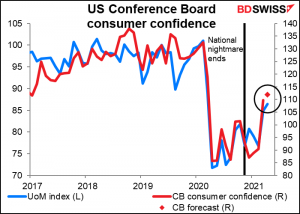 Next up is the Richmond Fed survey. The market doesn’t pay as much attention to this one as it does to the Empire State and the Philly Fed surveys, maybe because it’s usually the third to come out every month and so it’s getting to be a little old news. Nonetheless they should, because it’s the survey that is the most reliable indicator of the Institute of Supply Management (ISM) manufacturing purchasing manufacturer’s index (PMI). In fact, it’s more reliable than the Empire State index is – that’s only #4 of the five Fed surveys, according to my infallible (hah! That’s a joke) statistical analysis.

The Richmond Fed survey is expected to be up modestly, but both the Empire State and Philly Fed indices massively beat expectations (26.3 vs 18.8 and 50.2 vs 40.0, respectively) so I wouldn’t be surprised by a positive surprise, as it were. This index should confirm the idea that the US economy is on the mend and could be positive for stocks & negative for the dollar. 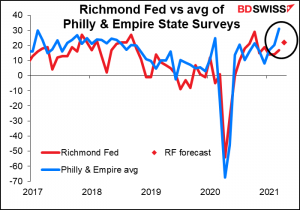 Then that’s it until dawn in Asia, when Australia comes out with its consumer price index (CPI). The headline figure is expected to jump, as it is all over the world, thanks to higher oil prices and base effects. The core measures though are forecast to be either unchanged (trimmed mean) or even a bit lower (weighted median). In any case they’re all expected to remain outside the Reserve Bank of Australia’s target range, so the RBA will probably remain “pedal to the metal” for some time further. 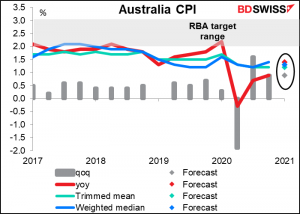 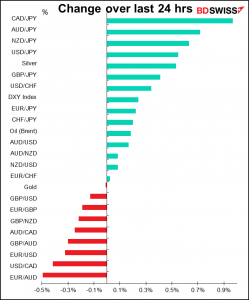