You are at:Home»MARKET PREVIEW»Commodity Currencies Higher in “Risk On” Mood; Three Fed Speakers 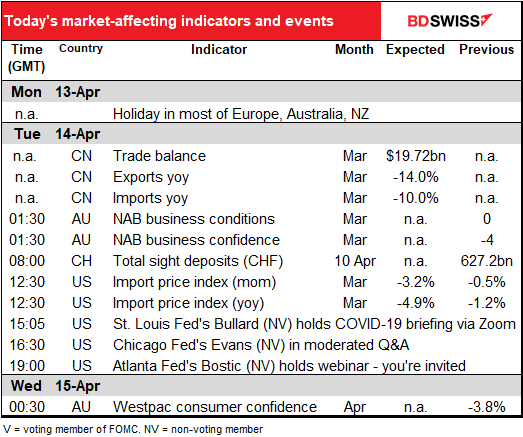 A “risk on” mood dominates this morning even though Wall Street closed lower yesterday in anticipation of a weak Q1 earnings season, which begins this week. Most Asian stock markets are higher this morning (except for India of course) and S&P 500 futures are trading +1.6%.

The FX market largely reflected that mood, with the commodity currencies rising and USD losing its bid. USD/JPY and USD/CHF were both lower, although not to the degree that would indicate a “safe-haven bid.”

Oddly enough, gold and silver were both higher. Rather than indicating investors seeking a hedge, it may indicate professional investors are no longer engaged in panic liquidation of portfolios, which allows the impact of strong retail demand for physical metal to feed through to the futures market.

The improved mood may be bolstered by the signs that the COVID-19 pandemic is starting to peak, at least in the developed world. The number of new cases every day is falling in the US, Eurozone and the UK, although it remains high. There is now starting to be talk about when to reopen economies, although so far it remains just that – only talk – in most places. France and Italy extended their lockdown even as Austria and Denmark this week will take the first small steps to lift their measures. 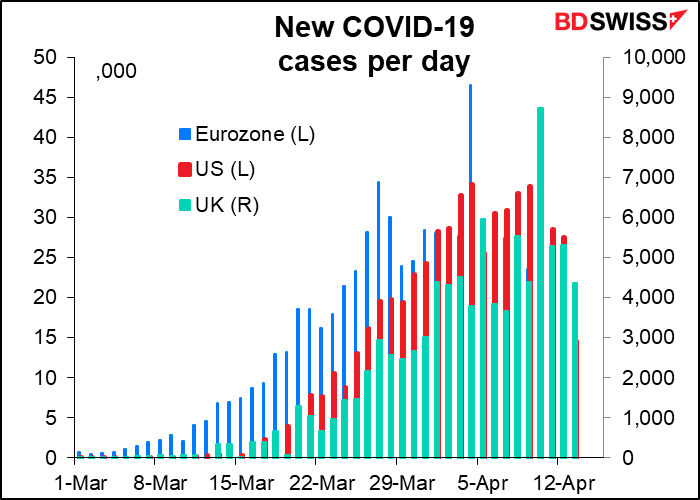 The mood in Asia was also helped by encouraging trade data from China.  China’s trade surplus for March was almost exactly in line with expectations at $19.90bn vs a market consensus forecast of $20.0bn – a remarkable hit in such uncertain times! The key point though was that neither exports and imports fell anything near like what was anticipated – exports were down only 6.6% yoy vs -13.9% expected while imports were down a mere 0.9% yoy vs -9.8% expected. The data suggests that China was able to get back to work in March and clear some of the backlog of export orders. 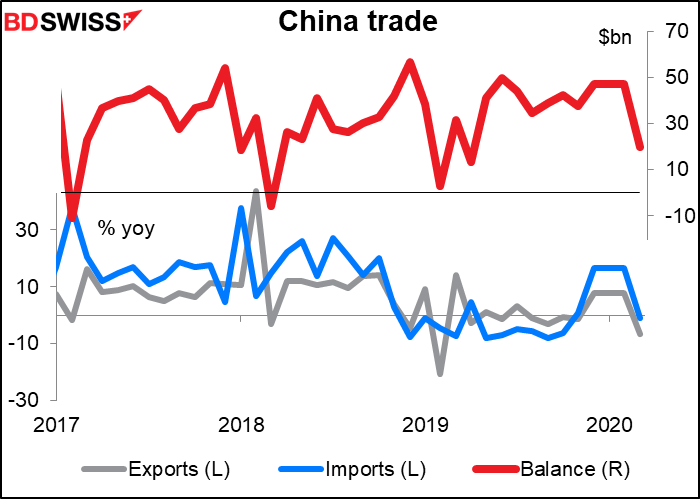 The mood was also helped by the news out over the weekend that OPEC+ finally agreed to cut production by 9.7mn barrels a day (b/d) in May and June. The settlement was a bit less than the 10mn b/d that they were aiming for, but at the same time they agreed to continue with lower production until April 2022 (a form of “forward guidance” for the oil market). The reason they couldn’t hit 10mn b/d was that Mexico, a member of OPEC+, refused to go along. The US, Brazil and Canada, three G20 members that aren’t part of OPEC+, said they would reduce output by an additional 3.7mn b/d due to natural declines in output, while other G20 countries will cut by an additional 1.3mn b/d. again due to the natural drop in output due to low prices. The Financial Times also reported that the major oil-consuming countries in the G20 “are also expected eventually to buy cheap oil for their countries’ strategic reserves to give a boost to demand…” It’s unclear to me whether this is just journalists’ speculation or an unwritten part of the agreement.

Although this was by far the biggest cut in OPEC history, it’s still a lot less than the fall in demand, which has been estimated at 20mn-30mn b/d. Furthermore, when they say they will cut production by 9.7mn b/d, you have to ask: starting from where? If they start from their recently boosted levels, which seems likely, then the impact will be less than it might seem. (Kind of like a store raising its prices by 10% before announcing everything on sale, 20% off.) And will they cut production immediately or phase in the reductions over a few months? Probably the latter.

Furthermore, the news was pretty much in the price – in fact, the final agreement was a little less than what was anticipated — and so oil didn’t get much of a boost. WTI is down 1.2% from where it was Thursday morning, before the OPEC+ meeting, and Brent is down 3.4%. They’re both down from yesterday morning (WTI -4.7%, Brent -1.7%).

What’s been causing the movement in oil prices? The New York Fed has the answer to that one. Every Monday they publish their Oil Price Dynamics Report. It’s a statistical model that examines correlations of oil price changes with a broad array of financial variables to determine which forces best explain price movements. It decomposes the movement in Brent between supply factors, demand, and “residual,” which is anything else.

As the graph shows, both falling demand and excess supply have been pushing down the price recently, although in late March the “residual” increased its influence. That residual can be thought of as a risk premium – the uncertainty around future supply & demand. The residual has pretty much disappeared now though, meaning that much the uncertainty in the oil market has disappeared thanks to OPEC+’s efforts. At the same time, the impact of the drop in demand – the blue bars – is still in the price, implying that the market has already discounted it. With many countries now talking about the timing for lifting their shut-downs, perhaps the outlook of oil is stabilizing. In that case we might see oil prices stabilizing as well, or at least not returning to the lows that we saw a few weeks ago. 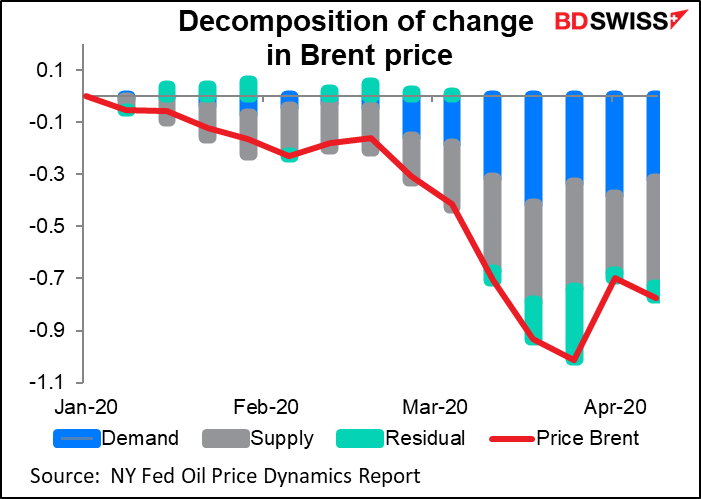 The implications for CAD and other oil currencies, such as NOK and RUB, are a bit less optimistic. Even if oil prices stabilize around current levels, which are well off the recent lows, the fact that prices are falling because of a fall in demand as well as excess supply suggests that the impact on the Canadian economy will continue. That’s because a recovery in prices led by a decrease in supply will limit the gains to Canada, since part of the benefit of higher prices will be offset by lower volumes. A recovery in prices led by higher demand however means both higher prices and higher volumes, reinforcing the beneficial impact on incomes. We will probably have to see oil prices rising from higher demand before we see a strong rally in CAD and the other oil currencies.

Finally, there are signs that the Fed’s efforts to stabilize the US financial markets are working. Financial conditions in the US have clearly stopped deteriorating and even improved somewhat, although they remain far worse than they were before the crisis began. For example, the Fed Friday Fed announced that it would reduce the frequency of repo operations as funding markets have started to stabilize. Financial conditions elsewhere have also stopped deteriorating, although they haven’t necessarily improved any. 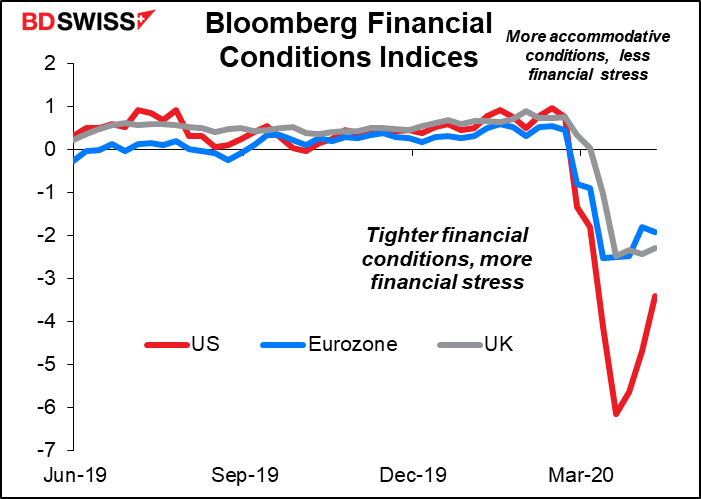 They increased their long EUR, JPY and CHF positions, as well as long RUB. At the same time they decreased their short NZD positions.

On the other hand, they reduced GBP and MXN longs and increased shorts in CAD and AUD.

More short AUD/long JPY positions might be considered a “risk off” trade,

They increased their long WTI positions and long RUB but increased CAD shorts. I don’t understand this entirely – why increase CAD shorts if you think oil is going up? But it appears that there’s no perceptible connection between positioning in CAD and positioning in WTI. I imagine it’s because oil isn’t the only thing affecting the USD/CAD rate. 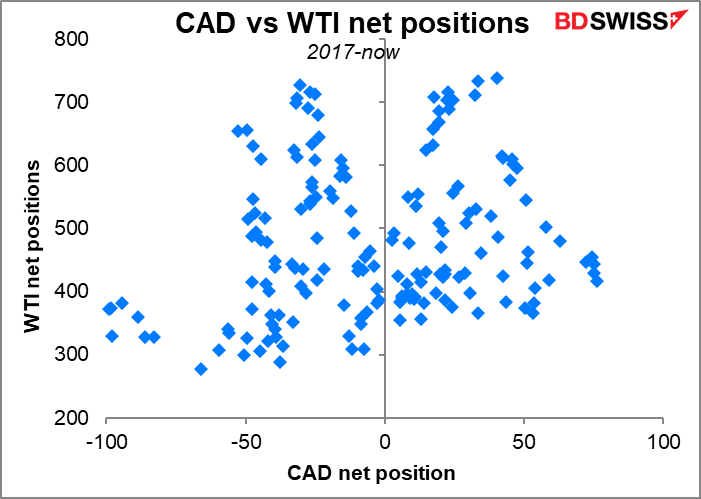 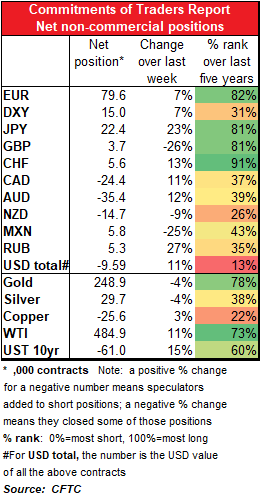 Today’s Swiss sight deposits are likely to show further intervention by the Swiss National Bank (SNB). That is one of the factors dragging down EUR/USD:  the SNB intervenes in EUR/CHF, but then to diversify its reserves moves some of the EUR that it buys into other currencies, particularly USD. 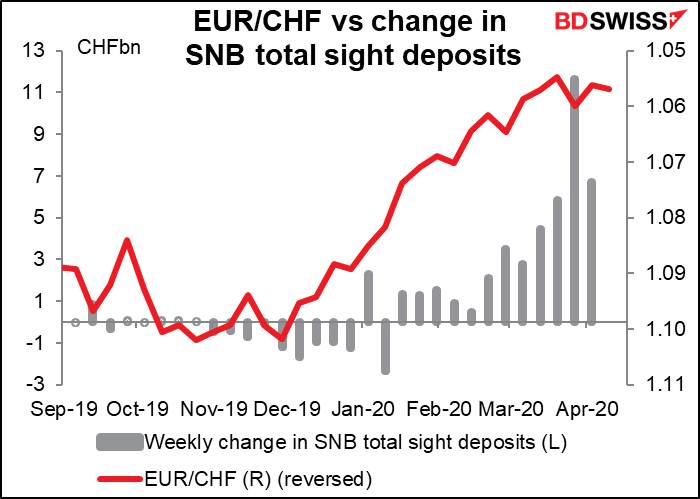 US import prices aren’t a worry for anyone these days.

The IMF/World Bank Spring meeting will be held this week. Usually that means a full schedule of the great and the good giving interviews and press conferences, but this year the meetings are being held virtually. The press briefings will all be streamed live; you can watch them on the IMF’s website, including today’s release of the twice-a-year World Economic Outlook.

This evening we get not one, not two but three Fed speakers. Formal speeches by Fed officials – indeed, by most central bank officials – have been rare recently, as most in-person meetings and conferences have been canceled. But we’re now seeing more and more webinars or webcasts or whatever they’re called. Fed Vice Chair for supervision Quarles and Cleveland Fed President Mester held them on Friday.  Tonight we get three:  Bullard and Evans are speaking via Zoom and Bostic is speaking by “webinar.” His presentation will be live-streamed – click on the link if you want to watch it. I wonder if more of them will be opened up to the public through live-streaming. That would help the public to understand what’s going on at the Fed better, assuming of course that people can take the time to listen and watch. Personally I prefer to read a news story about the event, because the reporter will sum up the important points and save me a lot of time – an article that takes three minutes to read might convey everything I need to know from a one-hour event. 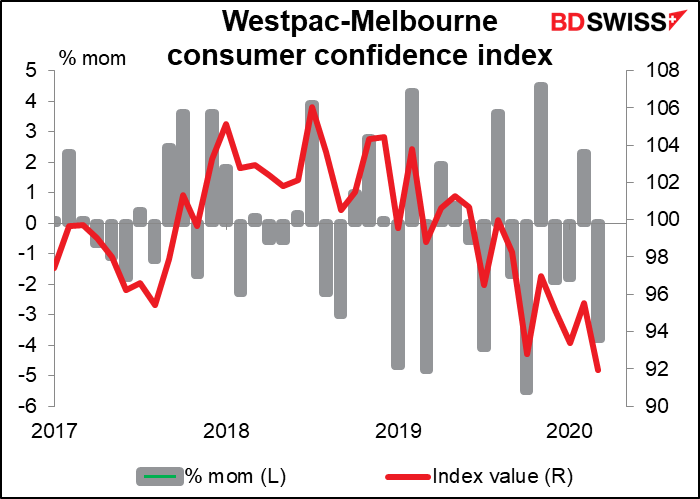 I trust my loyal readers remember that four-character Japanese phrase, gongo doodan, 言語道断 which means “unspeakable, atrocious, preposterous” etc. Well, this has nothing to do with the FX market today but I can’t resist mentioning it. The White House has announced the formation of a Council to Reopen America. This council will be tasked on deciding when to recommend lifting the regulations on meetings etc (which are actually set by the states, so the Federal Government really has no authority here). Note one important point:  there is not one person with any medical, epidemiological or other public health knowledge, nor even a scientist or professional economist, on this council. (I don’t consider Kudlow an economist, although he has worked in economics.) Yet they will be in charge of deciding the fate of millions. Words fail me. 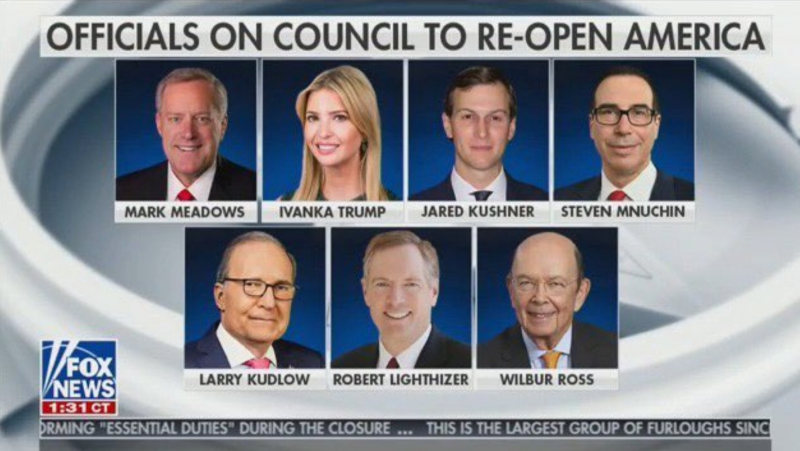 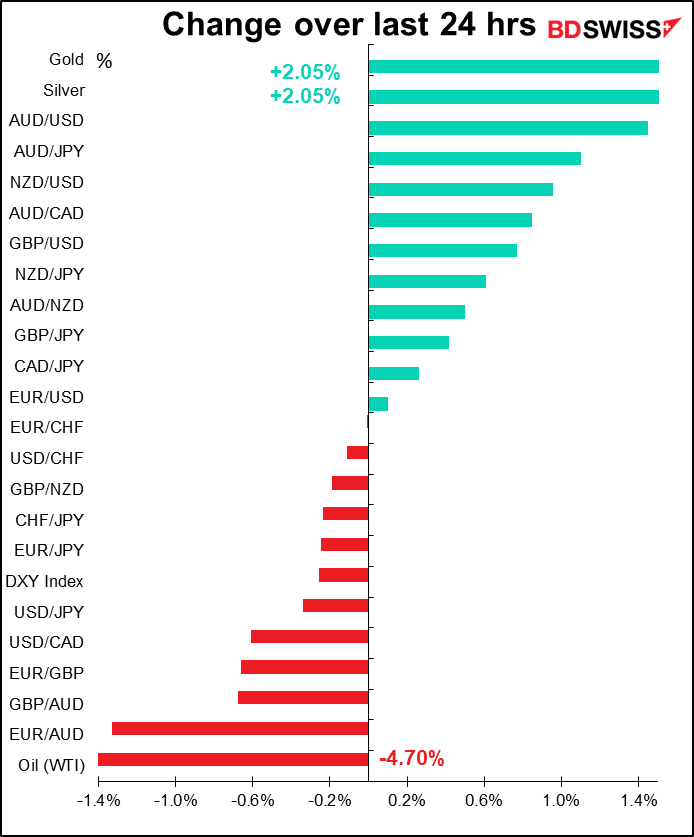