You are at:Home»MARKET PREVIEW»Commodity Currencies gain as NFP Jumps, EUR is Bizarrely Weak; Not much at all on the Schedule 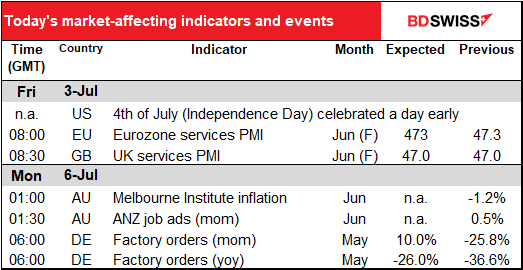 Yesterday’’ US nonfarm payrolls (NFP) for June massively exceeded expectations, with the US adding 4.8m jobs vs 3.2mn exected. The unemployment rate fell to 11.1% from 13.3% in May. Nearly 40% of the increase in private-sector payroll came from food services and accommodations, i.e. jobs that were lost during lockdown coming back.
Much of the improvement may simply have been the good luck that the week of the survey – the week containing the 12th of the month – also was more or less the low point for the virus in the US. Since then, the virus has come back in many states and unemployment claims are surging in those places. 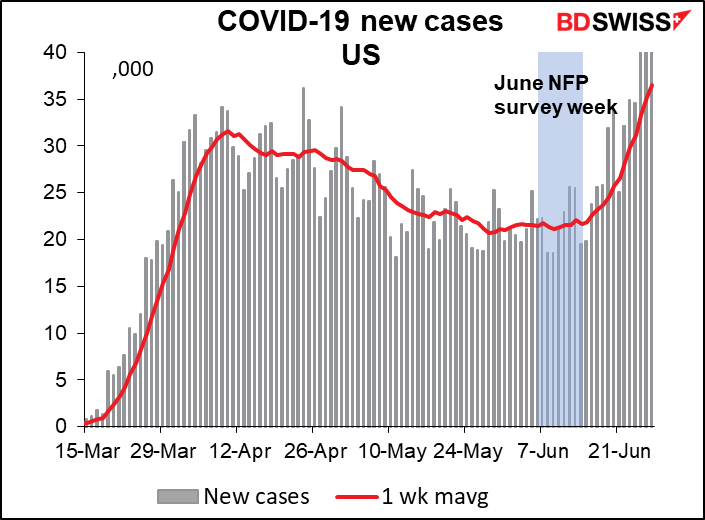 We shouldn’t break out the champagne just yet. It’s wrong to say that the US economy is adding jobs – recovering or restoring jobs would be a better term. Payrolls have risen by almost 7.5m jobs over the last two months, but this is just over a third of the more than 22m jobs that were lost in the previous two months – more jobs than were added total in the previous 10 years. Plus the unemployment rate is still well above the 10% peak reached after the 2008/09 Global Financial Crisis.

Looked at another way, if your boss cut your salary from $50k a year to $20k, then raised it a month later to $30k, would you expect to be delighted at your 50% raise?
(See this week’’ Weekly Outlook for further discussion of yesterday’s jobless claims figures.)

The rise in jobs adds to the political uncertainty around the future of US unemployment benefits. The additional unemployment benefits of $600 a week from the CARES act are set to expire at the end of July. Yesterday’s data may make the Republicans less likely to support extending these additional benefits, which could then run out a few days before the July NFP figures show a massive loss of jobs again. Adding to the political problems, the Democrats are lobbying for a $15/hr minimum wage, which the Rs object to. Negotiations and compromise will be required.

Having said that, despite the battles in the streets about whether to wear a mask, the degree of conflict among US Federal-level politicians is the lowest it’s been in decades, according to the Philadelphia Fed’s partisan conflict index. I guess having double-digit unemployment four months before an election encourages people to take action rather than just grandstand. That makes further action more likely. 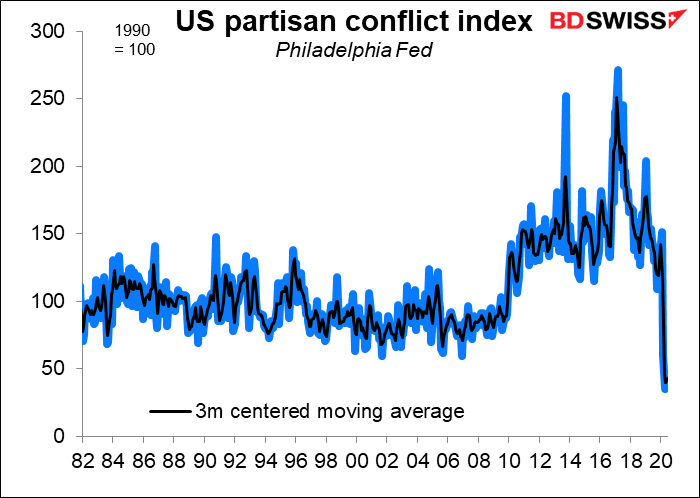 The better-than-expected NFP figure supported the “risk-on” mood and US stocks closed 0.45% higher, although the high for the day was +1.6% about half an hour after opening. The sell-off accelerated about 1 ½ hour before the close after the latest virus numbers showed the situation in Florida worsening severely. 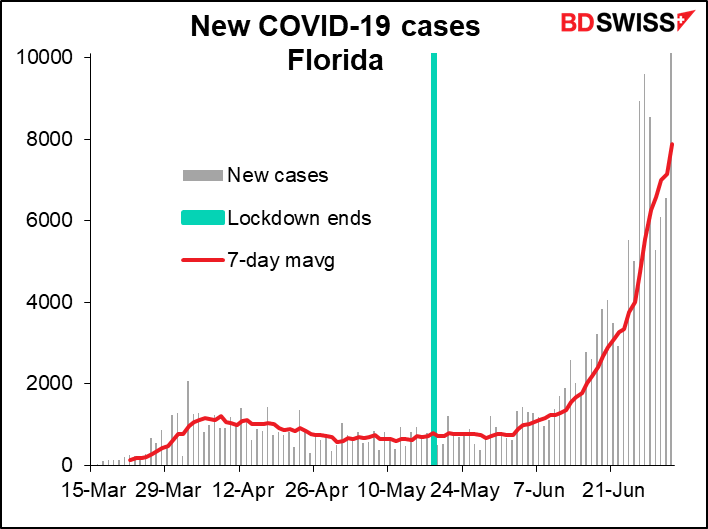 Nonetheless the good mood carried over into Asia and almost all Asian markets are higher this morning.
In FX, the reaction to the mood was more typical this morning than yesterday, with the commodity currencies gaining. Once again NZD led the pack and AUD/NZD moved lower. At the same time, gold and silver also rose.

EUR was the weakest of the G10 currencies despite some distinctly EUR-positive news. A broad coalition in Germany’s Bundestag voted to accept the ECB’s explanation for its Public Sector Purchase Program (PSPP), thereby defusing the crisis that emerged when the German Constitutional Court questioned its legality. The vote demonstrates the resolve of Germany’s political establishment to keep Europe together. Moreover, European stock markets gained even more than the US in reaction to the jobs data and the comparatively good news on the virus from the continent. The STOXX 600 jumped by nearly +2%, while the CAC 40 and the DAX rose even more. The enthusiasm showed up in the sovereign bond market too, where the spread of Italian BTPs over 10yr Bunds hit a three-month low. I can’t understand why EUR/USD isn’t stronger than it is. 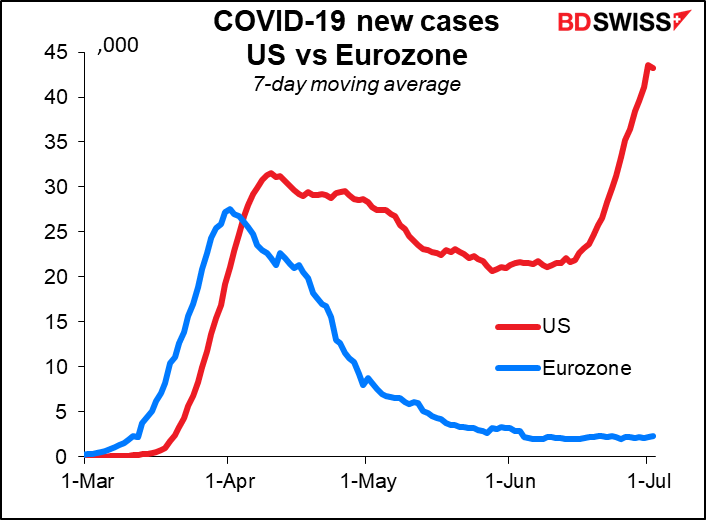 Quite the contrary for GBP – I can’t understand why it isn’t weaker than it is. With less than six months to go in the Brexit negotiations, EU’ chief negotiator Barnier said that “serious divergences remain” between the EU and the UK after the latest round of discussion. On the other side of the table, chief UK negotiator Frost said that the negotiations have “underlined the significant differences that still remain between us on a number of important issues.” Yet the risk reversals show no specific concerns about that date, and have actually been moving up recently – i.e., less demand for protection against what seems to me to be the almost-inevitable disaster (unless Boris “The Umbrella” Johnson folds as usual.) Further talks are scheduled for next week. 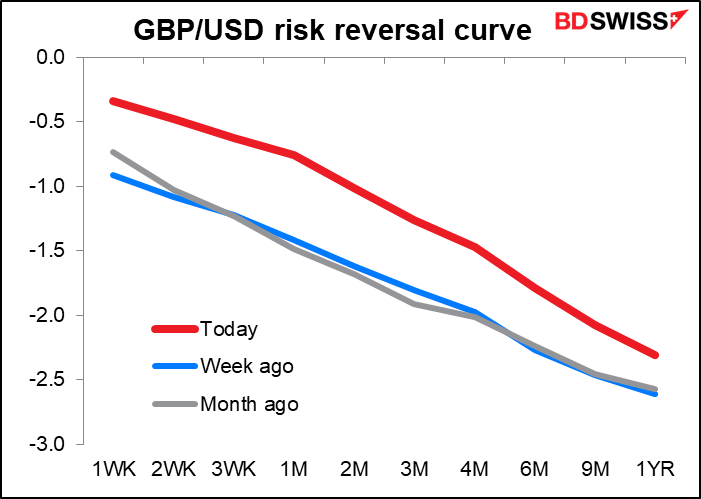 Today’s market
We have a quiet day in store for us indicator-wise. Nothing major during the European day, just the final version of the service-sector purchasing managers’ indices (PMIs), which are rarely revised much and don’t make many waves even when they are. Then the US takes off a day early for the 4th of July, aka Independence Day.

Do you know why Americans celebrate the 4th of July? No? Well, you’re in good company, because a lot of Americans don’t know, either. Watch this video on YouTube. It will explain a lot about America to you. It’s profoundly embarrassing. We learn this stuff in elementary school. Or at least we’re supposed to. https://www.youtube.com/watch?v=2-Be9f7Ovgg

So that’s it until German May factory orders Monday morning. (There are two Australian indicators, but they’re second-tier with no forecasts available.) Orders expected to jump on a mom basis, but that’s only because April was such a disaster. Orders are still expected to be far far below last year’s level. At least though they may add to the evidence that April was the bottom. 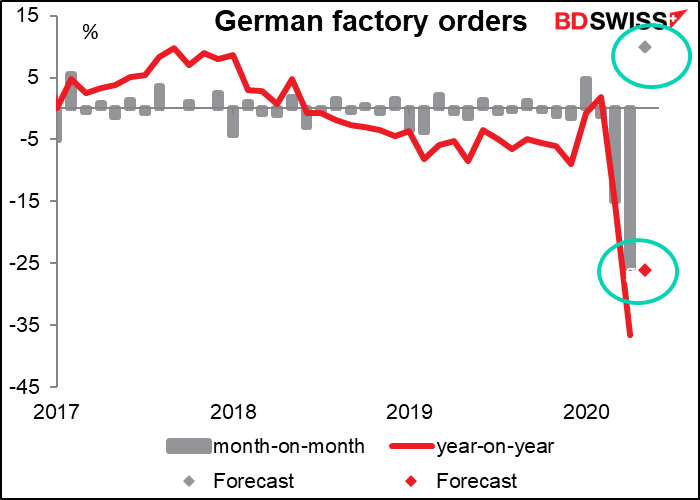 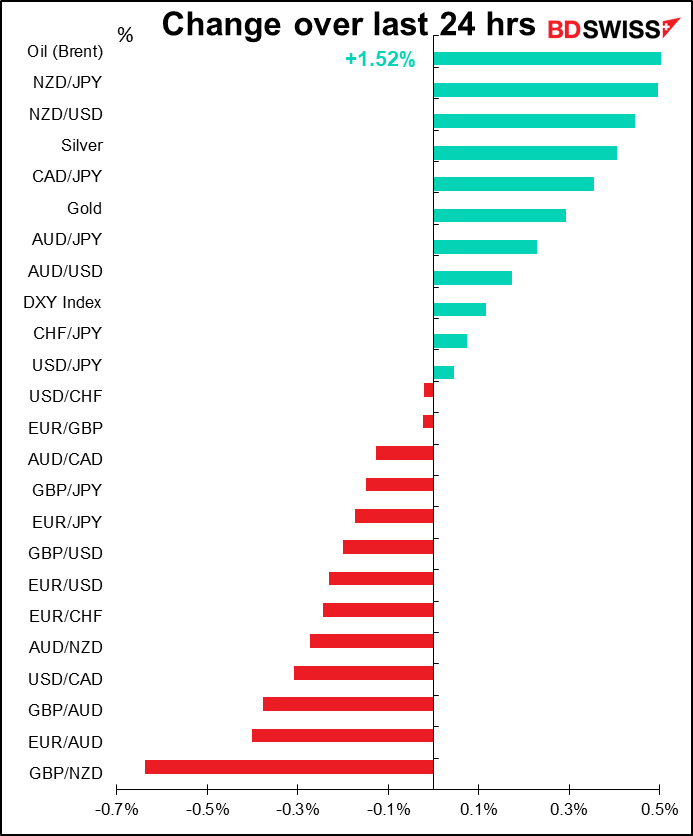