You are at:Home»MARKET PREVIEW»Commodity Currencies Down as US inflationary Pressures rise; RBA meeting 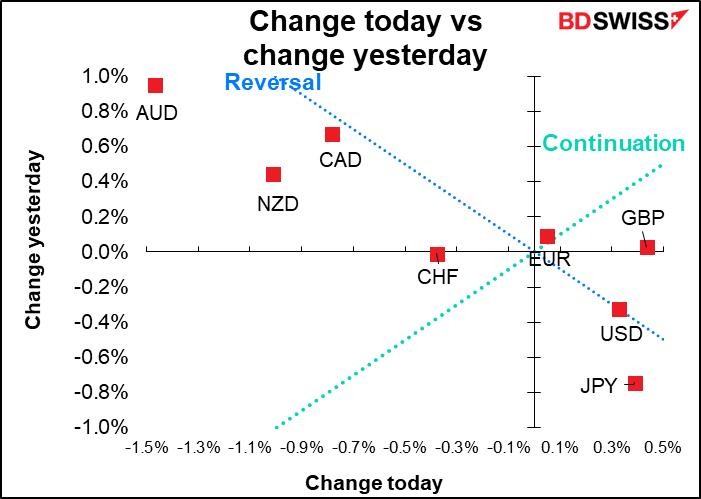 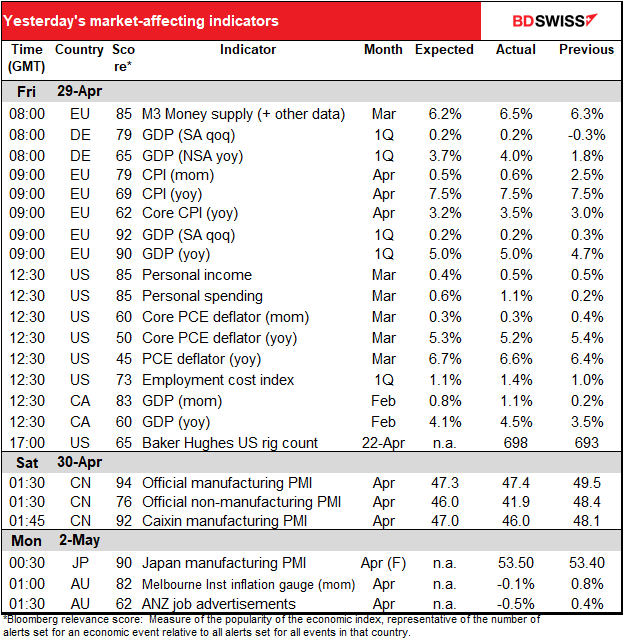 The commodity currencies remain under pressure as markets grow increasingly risk-averse. US stocks fell sharply Friday, with the S&P 500 down 3.6% and the beleaguered NASDAQ off 4.2%. The NASDAQ is down 21% so far this year, its worst-ever start to a year.

US stocks were hit Friday as the  Employment Cost Index (ECI), the most comprehensive measure of US labor costs, beat market expectations with a record leap in Q1 (data back to 1996). The report corroborated other measures of wage increases, such as the Atlanta Fed wage growth tracker, and raised fears of a wage/price spiral. 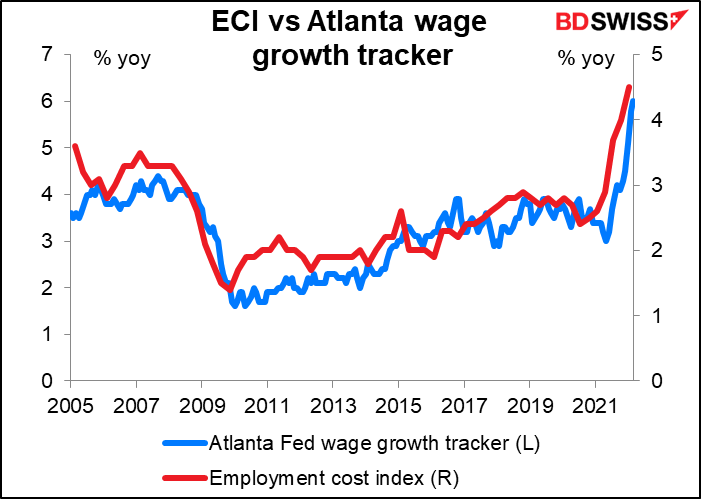 Higher wages are also the definitive sign of a tight labor market. Remember that Fed Chair Powell has said the US labor market is “extremely, historically tight” and “volatilely hot.” Data like this only confirms that idea – and makes it more likely that the Fed will assume it can hike rates further without endangering its commitment to “maximum employment.”

The result was that the market is now discounting 50 bps hikes for the rest of the year. That’s what would be necessary to get the fed funds rate to 3.0%-3.25% by the December meeting. The market is even pricing in a small chance of a 75-bps hike at this meeting (9%) or the July meeting (14%). 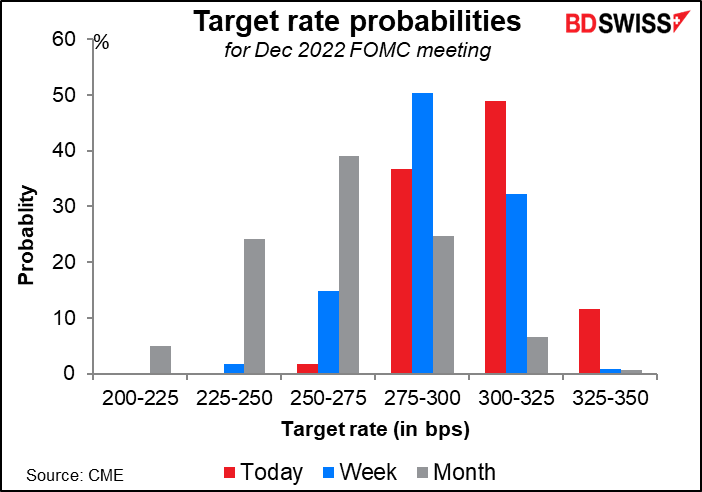 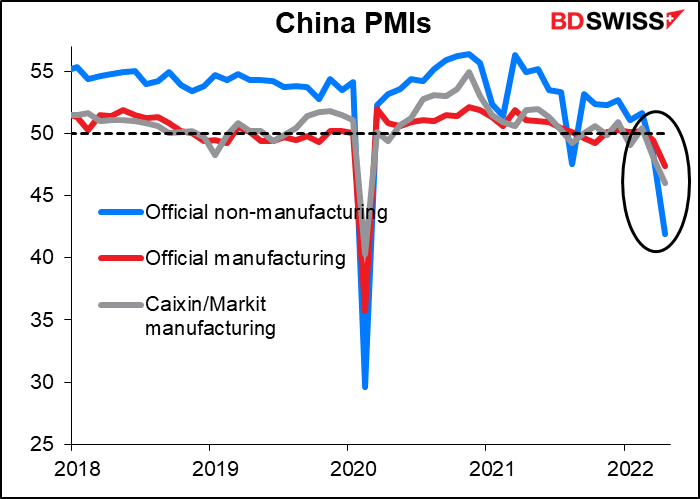 Friday’s Eurozone headline inflation came out in line with expectations but the core rate was higher than expected (see table above). The European Central Bank targets headline inflation but the higher core reading is worrisome nonetheless because it suggests inflationary pressures aren’t just due to higher energy prices. ECB Chief Economist Lane Friday said the question is no longer about hiking, but rather “the scale and the timing of interest-rate normalization.” The fall in the euro would be an “important factor” in determining their forecasts, he added. Lane is usually one of the more dovish members of the Governing Council and so if he’s shifted to this view then it’s gone mainstream at least.

It’s significant that Lane didn’t push back against the market’s current pricing. The market is currently pricing in around 1 percentage point – four 25 bps hikes – in the ECB’s deposit rate this year. 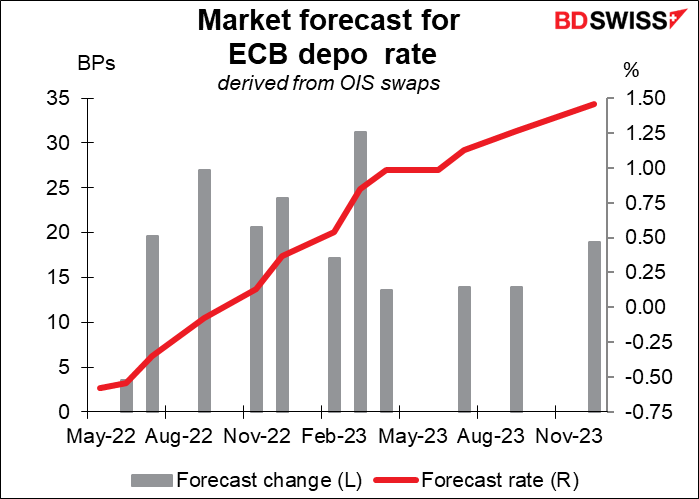 Speculators barely changed their overall net USD exposure last week. There were only significant moves in three currencies: they cut their long EUR positions a bit, trimmed their short JPY, and added to short GBP. Otherwise everything was pretty much unchanged. Boring, boring, boring. 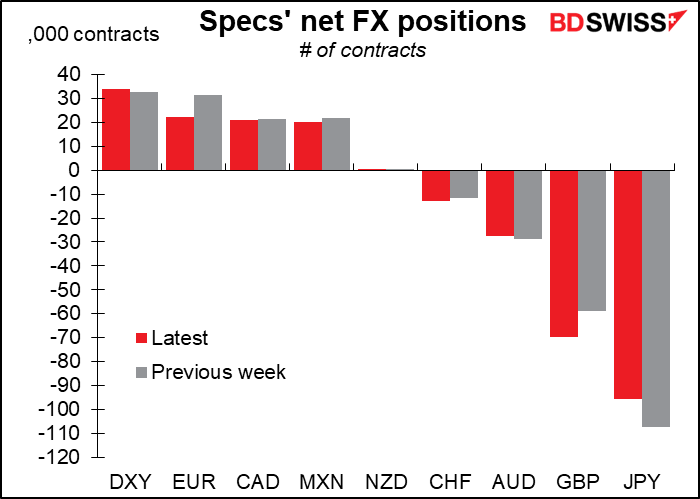 Hedge funds were more active. They too cut their short JPY a bit. They also trimmmed their long GBP while adding to their long CAD and flipped from short NZD to long NZD. Among shorts, they trimmed their short AUD but added to short EUR. So they became a  bit more optimistic about the commodity currencies while at the same time a bit less pessimistic about JPY. 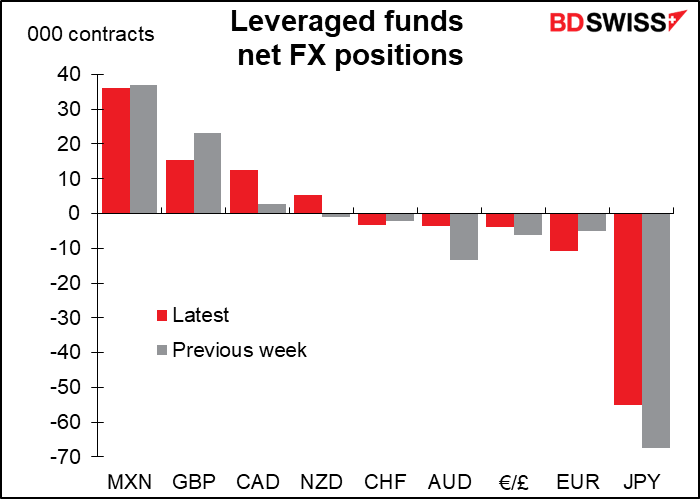 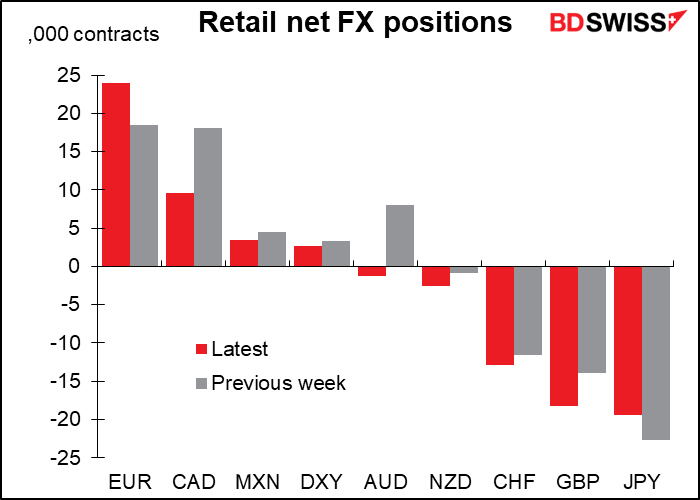 Precious metals:  Speculators cut their long gold and silver positions notably. A bearish turn? For gold this was the biggest reduction in both absolute terms and percent since the first week of February. That move was no obstacle to the gold prices at all so I wouldn’t worry about this decline either – not yet, at least. 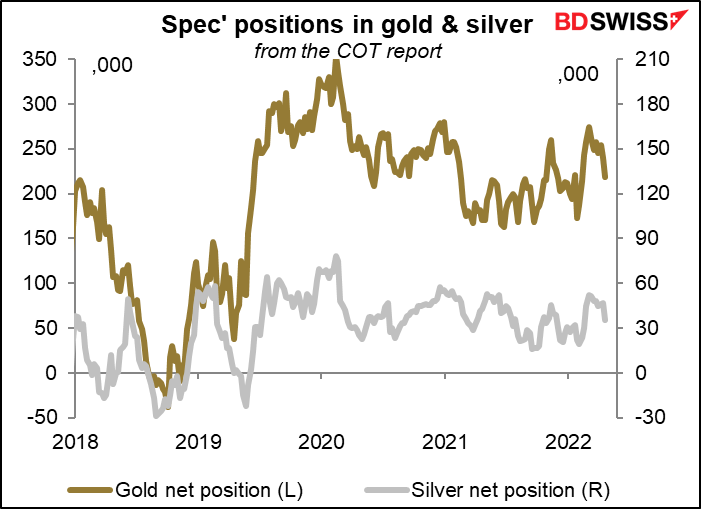 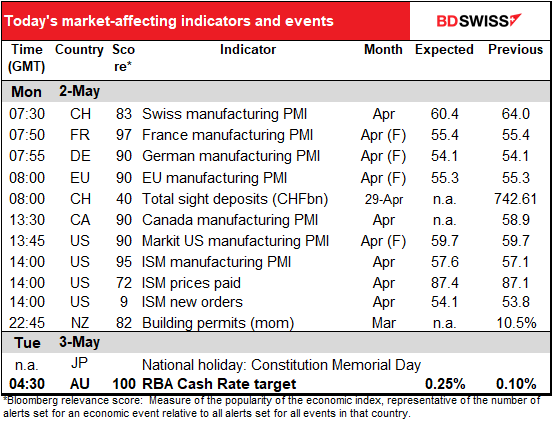 Today we get the manufacturing purchasing managers’ indices (PMIs), as usual the final ones for the major industrial economies ((Japan, Eurozone, UK, US) and the first-and-only versions for other countries. The preliminary PMIs for the major industrial economies were released about a week ago. The forecasts for those are just the preliminary PMIs themselves – no one bothers forecasting the revisions, which are usually not enough to be market-affecting (although sometimes they are). The focus then is on the other countries and the general tone: how many countries saw an improvement and how many are backsliding? In particular we’ll want to see how the fighting in Ukraine and the lockdown in China are affecting the global manufacturing system.

The final Markit PMIs also bring the Institute of Supply Management (ISM) version of that indicator for the US, which also includes the closely watched prices paid and new orders sub-indices. The ISM index is expected to be up slightly (+0.3 point) but still below the Markit version of this index, which is not unusual. The ISM asks about the company’s entire operations (including overseas) whereas the Markit version confines itself to the company’s US operations only. Those are probably doing better than the overseas operations as the US economy is relatively strong. 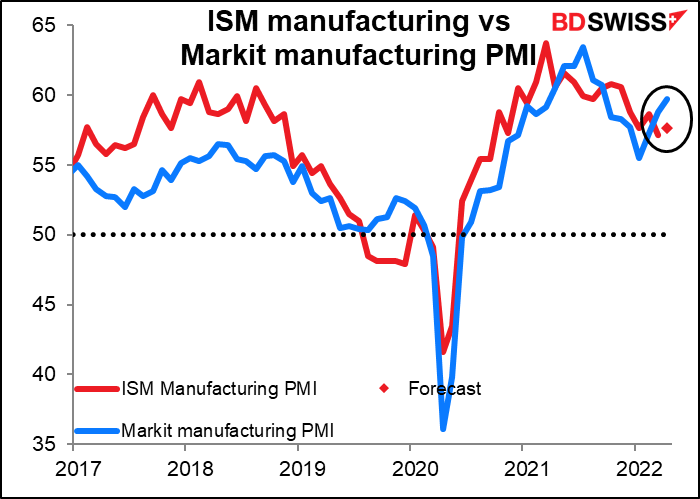 The prices paid index used to follow the US consumer price index fairly closely, but recently the latter has exploded higher, whereas the former can’t go any higher than 100 (which would mean all companies were seeing higher prices). Still the expected slight rise in the prices paid index doesn’t suggest a downturn in inflation any time soon. 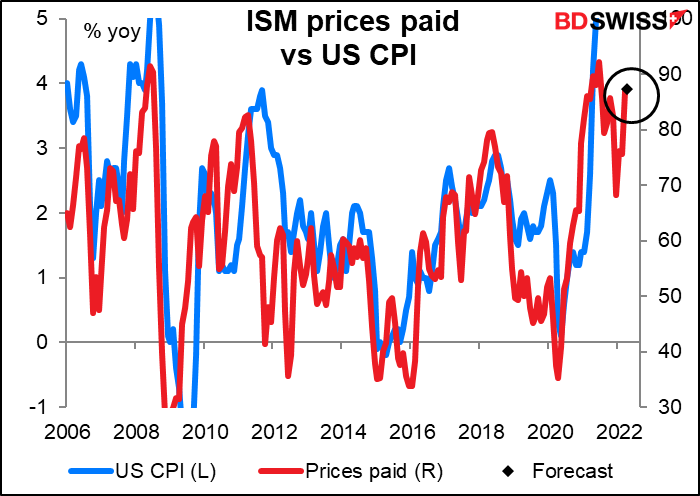 The Swiss National Bank (SNB) has stepped up its intervention recently, apparently trying to hold the line as EUR/CHF wavers. The latest week the pair moved down a bit further (up in the chart, where EUR/CHF is inverted). Did this trigger more intervention? Tune in and find out! 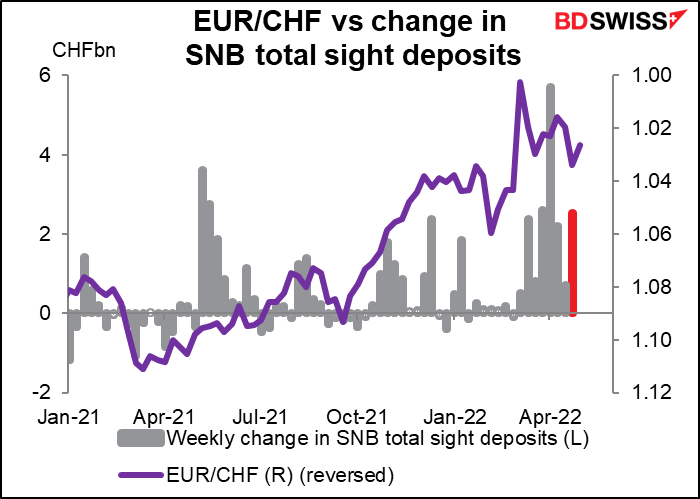 That’s it for the European and US days.  The real action is overnight, when the Reserve Bank of Australia (RBA) meets.

As usual, I wrote more about this than most people would be interested in in my Weekly Outlook piece, so I’ll just summarize what I said there and add some market color.

The main question will be whether the RBA follows the Riksbank and joins the global hiking trend or whether it sticks with its view that Australia’s inflation is not “sustainably” within its 2%-35% target range.

I think the recent CPI figures settled that question. The surge in inflation in Q1 to 5.1% yoy from 3.5% reported last week was the highest in 21 years (since Q2 2001). The quarter-on-quarter rate of increase (2.1% qoq) met their target for the year-on-year rate! And both their core measures are now above the target zone. 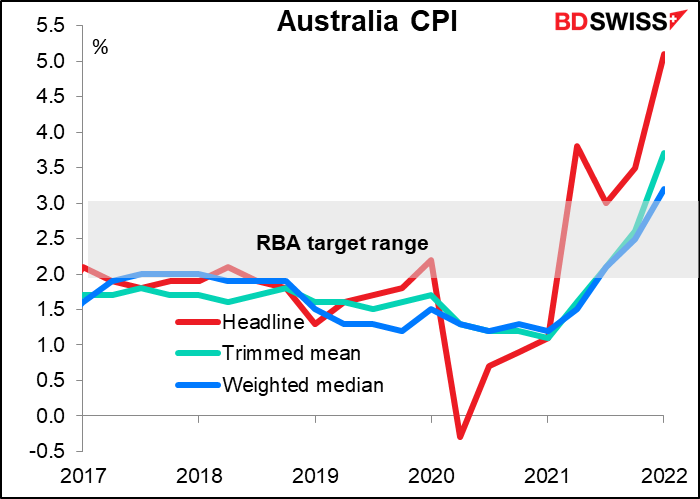 Accordingly, the market thinks – and I agree – that they will hike rates 15 bps to 0.25%. The expectation then is that once the RBA gets its new forecasts in May it might have to start playing “catch-up” and hike by 50 bps at a time. 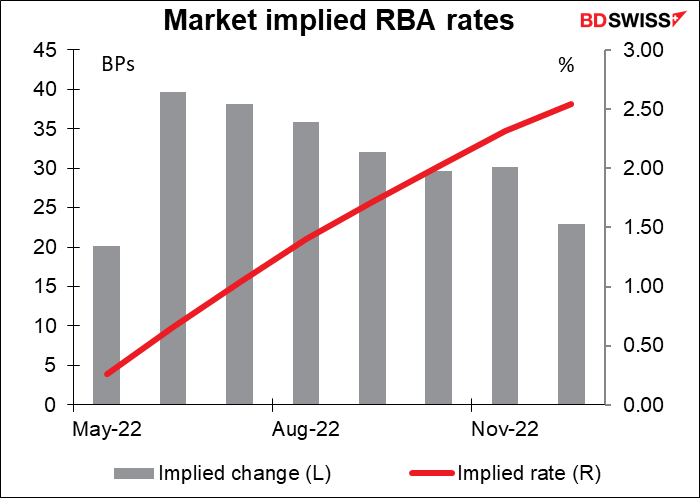 Will the RBA validate these extreme expectations? I think it may take until May, when they have new forecasts, before they fully change their tune. I think AUD could stumble after next week’s meeting if the RBA fails to confirm the market’s expectations.

There’s one other point of interest at the meeting. Back in March, when the Board ended the bond purchase program, it said “The Board will consider the issue of the reinvestment of the proceeds of future bond maturities at its meeting in May.” Well, now it’s May. What will they decide? Even if they decide not to reinvest any of their maturing bonds it won’t have such a big impact because only about 5% of the bond portfolio matures by the end of next year. They may set caps on how much can mature in any given month, like the Fed is doing. But given the small amount of maturities in the next few years, they may also consider selling bonds so that the balance sheet shrinks faster. I doubt if that will be decided at this point though. 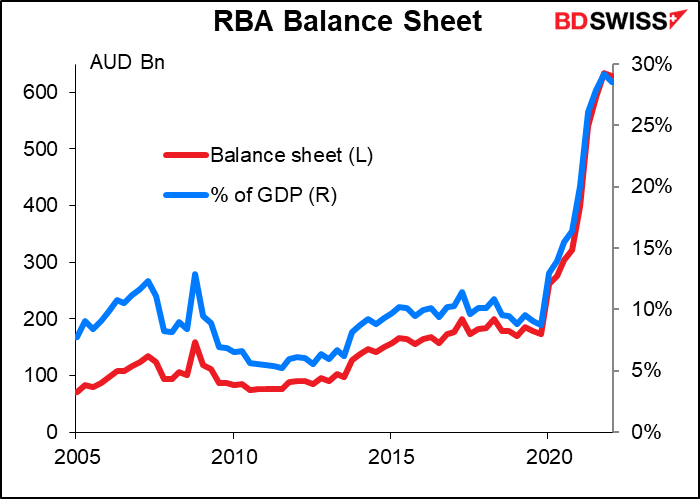 Likely impact:  On average, AUD/USD doesn’t do anything in the days following an RBA meeting! At least, that’s the experience over the last six months. Of course the average masks notable movements. Moreover, when the result is “no change” it’s not surprising that the currency would weaken afterward. We could see a different pattern if and when they start moving rates. Of course as I said a lot is already priced in so it will take a lot to move the currency further. That might not be forthcoming. 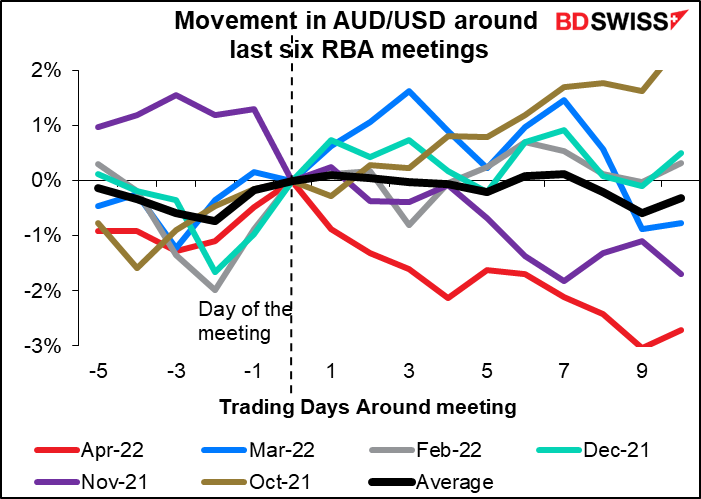 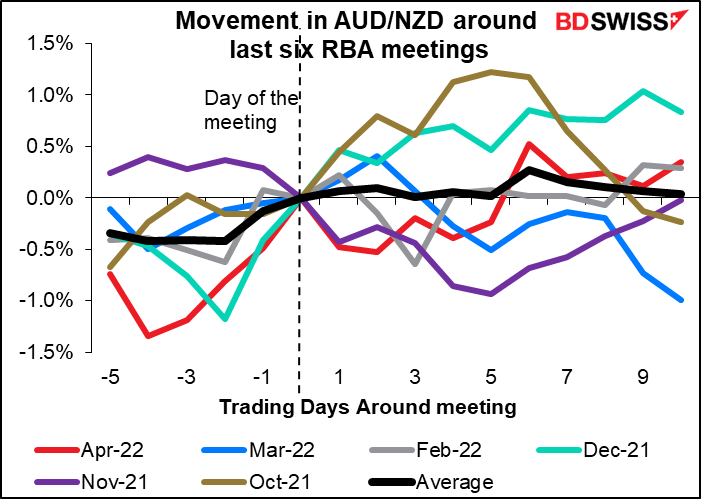 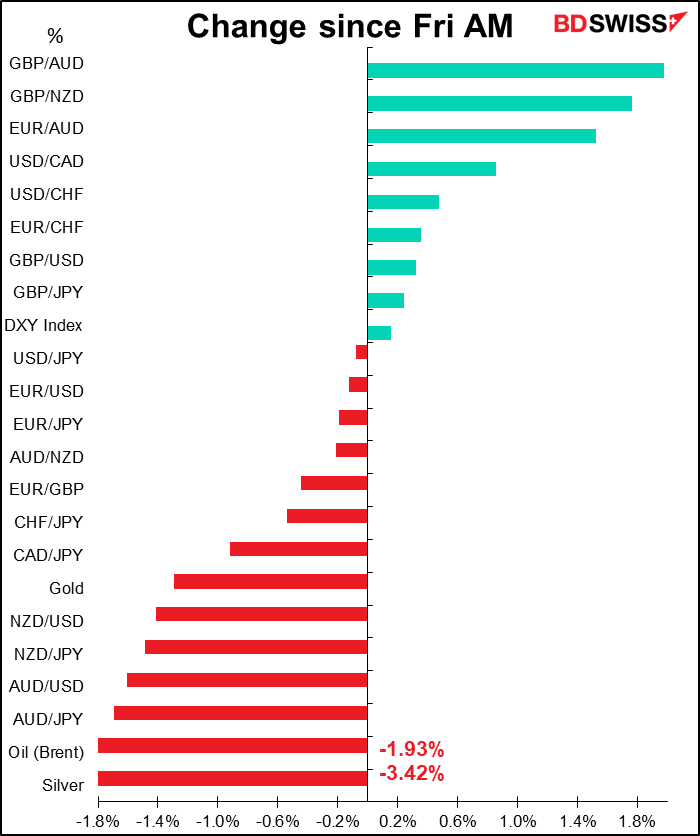