Rather modest movements in the currency market since Friday morning.

The biggest move was in the Turkish lira (TRY), which collapsed some 14% after Erdogan dismissed the head of the central bank – the third CB head to lose his job in less than two years – and replaced him with someone who favors low rates and growth rather than currency stability (which many people think is a prerequisite to growth – ask any Argentinian or Brazilian). It’s now down only 9% but still… 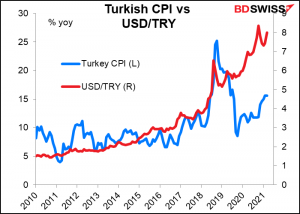 The sharp move should remind us of the dangers of carry trades. They are sometimes called “picking up nickels in front of a steam roller.” 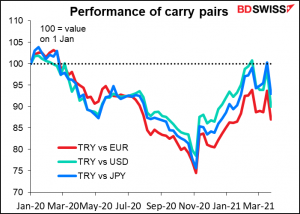 The plunge in TRY sent the commodity currencies lower and JPY & USD higher. That may have been due to people closing out TRY carry trades. AUD was also hit by a fall in iron ore prices.

I think the problems in Turkey are likely to be pretty much confined to Turkey and therefore not a systemic risk for the FX market. I don’t think this is going to be anything like 1998, when a default in Russian bonds set off an enormous and sustained move in currencies as carry trades unwound. Anyone who was unaware of Erdogan’s mercurial nature was probably not smart enough to have a very big position anyway. I therefore expect the risk-off moves to reverse in due time and for the commodity currencies to rebound vs JPY.

Speculators finally capitulated to dollar strength. Longs declined in every currency, while the DXY index position flipped from negative to positive. 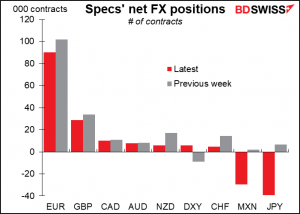 Specs remain short dollars, but not as much as they were. 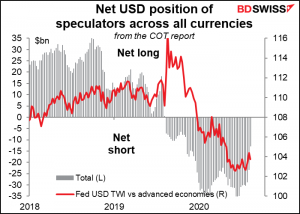 There was a particularly big shift in the JPY position as specs finally capitulated to the JPY weakness. The week to March 9 they turned neutral (+6.5k contracts, down from +19.3k the week before) but last week they went aggressively short (-39.4k contracts). This was a change of 45.9k contracts, the biggest drop in yen contracts since April 2011. As each contract is worth JPY 12.5mn, this is a change of around JPY 574bn or $5.3bn. 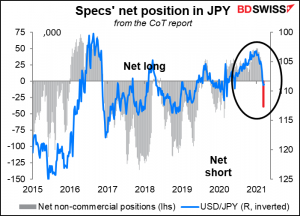 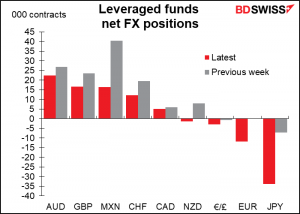 Speculators also switched from slightly long to substantially short the Mexican peso (MXN), although in fact MXN strengthened over the week. 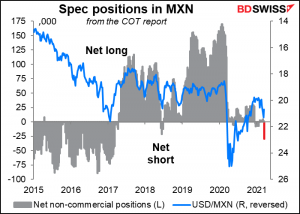 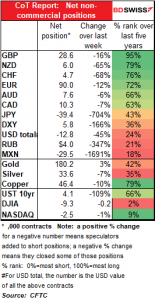 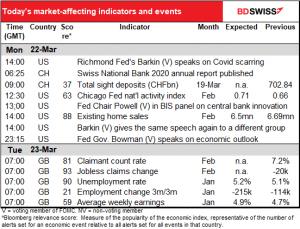 The weekly Swiss sight deposits suggest that the Swiss National Bank (SNB) has not been intervening recently, perhaps because EUR/CHF is rising of its own accord. Let’s see if that continues this week as EUR/CHF lost some of its recent gains. I wonder if the SNB will say anything about its recent activity, or lack of it, at Thursday’s SNB meeting. I doubt it – I think they’ll just repeat the boilerplate phrase that “In light of the highly valued Swiss franc, the SNB remains willing to intervene more strongly in the foreign exchange market. In so doing, it takes the overall exchange rate situation into consideration.” 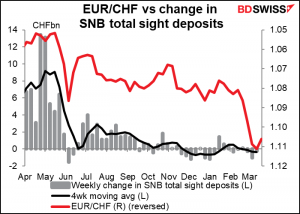 Advances in technology affect the functioning of the real economy and the way financial services are provided. Most of all, it requires central banks to broaden the fields they cover, and the technologies they use to cover them. Central banks today need a deep understanding of new technologies, as well as forums in which to share and pool that knowledge. And we need to work together to develop public goods for our communities. How can central banks be a catalyst for innovation in the digital age and apply new technologies to solve real-world problems in the financial system?

The EU summit this Thursday and Friday will include a “Euro Summit” on Friday that will discuss “how to strengthen the international role of the euro.” That’s all the information that I have about it. But given that the European Central Bank (ECB) is supposed to receive the initial results from a trial of a digital euro sometime this month and then decide whether to pursue the idea, I think we could be getting near to an announcement on the subject. A digital euro would be a gamechanger in the digital currency world and so I think anyone with an interest in cryptocurrencies should watch out for some announcement here. (I wrote about this idea and central bank digital currencies extensively in this week’s Weekly Outlook, Digital Time in Europe.)

US existing home sales are expected to be down 2.8% mom. This is a bit less than tomorrow’s new home sales, which are forecast to be down 5.2% mom. However, I think people are likely to ignore these figures or at least discount their importance as being heavily affected by the bad weather during the month. 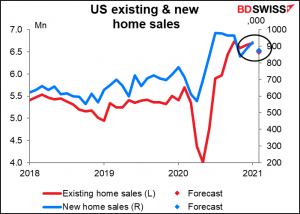 That’s it for the data today. There are several Fed speakers, including the hawkish Richmond Fed President Barkin (V), who will be giving the same speech this afternoon that he gave to a group in Asia this morning. It’ll be (kind of) interesting to hear what Fed Gov. Bowman says about the economic outlook – she’s on the Board of Governors to represent community banks and generally confines her comments to that subject, so not so much is known about her general economic outlook (she’s considered to be a centrist). There are also a couple of Fed speakers I didn’t put on the schedule as they don’t seem likely to affect the FX market: SF Fed President Daly (V) will speak on the future of education, and Gov. Quarles (V) will speak on LIBOR transition.

In any event, the Fed speakers this week will play an important role in determining the path of the dollar as they try to build on last week’s dovish Statement of Economic Projections, which showed that they expect to keep rates unchanged despite upgraded economic forecasts and inflation hitting their target for three years. They will be trying to convince the skeptical bond market that they are indeed committed to their new flexible average inflation targeting (FAIT) policy framework, and in particular that they will indeed allow inflation to run over 2% for some time before raising rates. If they manage to do that, I think inflation expectations would rise, US real interest rates would fall, and the dollar would be likely to weaken. 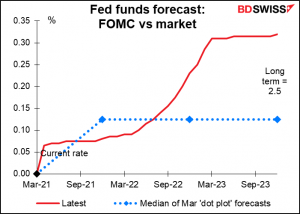 Then tomorrow morning, bright and early, we get the UK employment data. With the Bank of England, like many central banks, now paying as much if not more attention to the labor market than to inflation, this is likely to be a closely watched figure. Whether it’s market-moving or not may be another matter. The fact is, everyone knows that January was a dreadful month in Britain thanks to the lockdown, so I don’t think people will be that surprised or worried to see a big fall in the number of people in work and a sharp rise in the unemployment rate. If they are worried however then this kind of bad economic news could be negative for the pound. 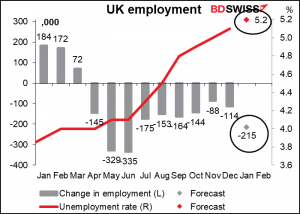 Since it seems to have a high Bloomberg relevance score still I present to you a graph of the jobless claims and claimant count rate just for your information, education, and elucidation, although a) there are no forecasts and b) the Office of National Statistics stopped making a fuss over these series several years ago as they said they “may now be providing a misleading representation of the U.K. labor market.” 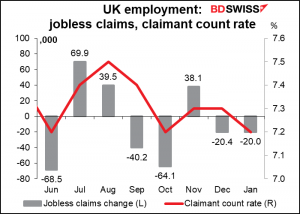 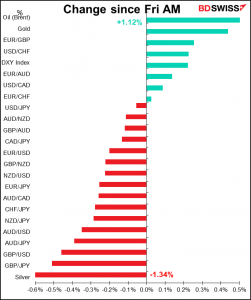