You are at:Home»MARKET PREVIEW»CHF/JPY Higher on “Risk On,” US Treasury Report; US Retail Sales, China GDP 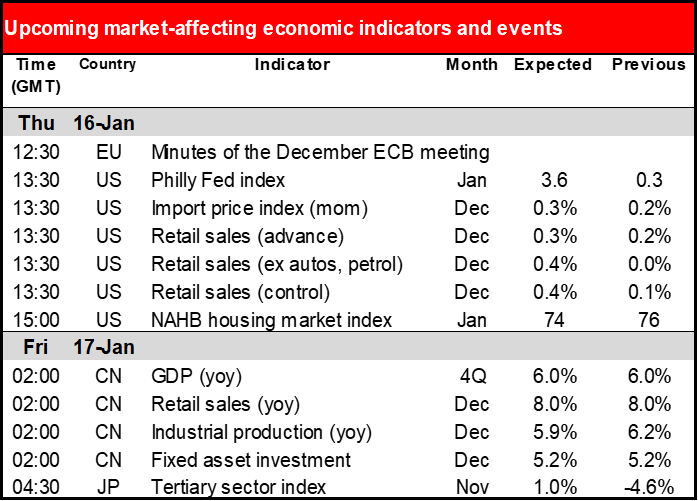 Although on a trade-weighted basis NZD was the biggest gainer on the day, vs USD it was the CHF. Interesting because JPY was the biggest loser on the day, so this can’t be explained as the usual “risk-off” move. In fact, the US stock market finished higher, although stocks in Asia this morning are mixed, with China in particular lower.

The different trend for USD/CHF and USD/JPY is nothing new. The move higher in CHF/JPY has been one of the noticeable trends so far this year. 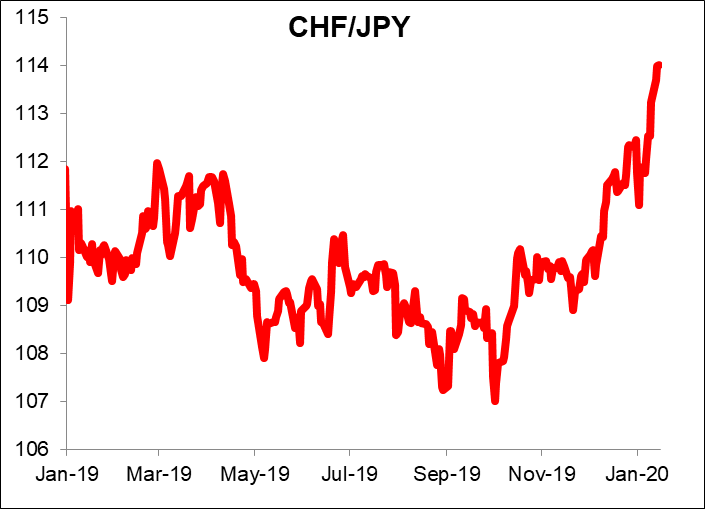 The longer-term reason is probably the different response to risk. CHF/JPY does seem to be correlated with “risk-on, risk-off” moves, as measured by AUD/JPY. That is, in “risk-on” environments, AUD/JPY tends to rise, as does CHF/JPY, and vice-versa. 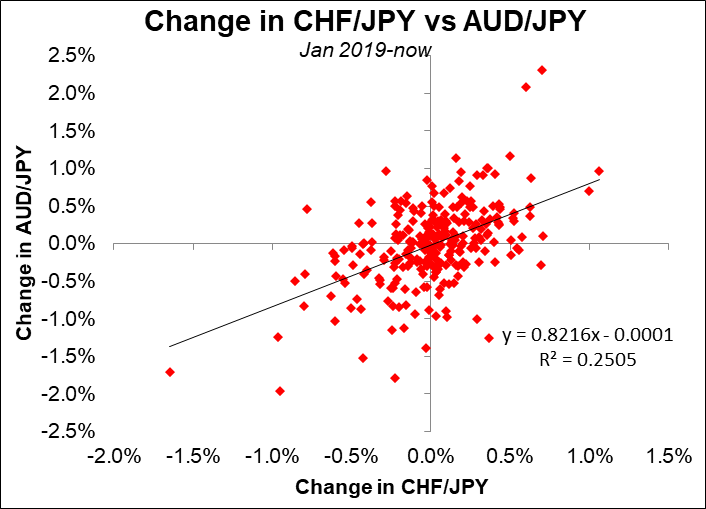 The daily change in the two pairs has had a consistently positive correlation for quite some time now. 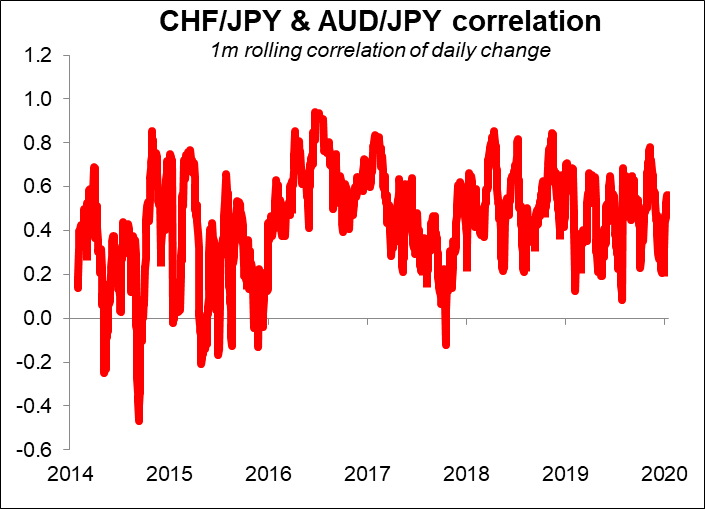 In part, as the US-China trade war seems to be drawing to a close with the signing of the Phase One agreement yesterday, JPY’s “safe haven” premium is evaporating. That’s leading JPY to decline vs CHF.

The move gained further impetus this week when the US Treasury Department Monday added Switzerland to its list of countries that warrant placement on Treasury’s “Monitoring List” of major trading partners that merit close attention to their currency practices. Along with Switzerland, the list now includes China, Germany, Ireland, Italy, Japan, Korea, Malaysia, Singapore, and Vietnam. (In case you’re wondering how individual EU countries can be accused of such crimes when their central banks control neither monetary policy nor FX policy, the answer is that the criterion for inclusion is “any major trading partner that accounts for a large and disproportionate share of the overall U.S. trade deficit.”) Switzerland not only has a large trade surplus with the US ($20.4bn) but also does admittedly intervene in the FX market quite substantially.

Will this designation change the Swiss National Bank’s (SNB) behaviour? I doubt it. A spokesperson for the SNB said the intervention was “only motivated by monetary policy” to offset “the negative effects for inflation and the economy of a too highly valued franc.” And indeed it’s hard to argue with the SNB’s view that CHF is “too highly valued.” According to the OECD’s purchasing power parity (PPP) calculation, CHF has been overvalued vs USD almost constantly since 1986, and always vs EUR, the main trading partner of Switzerland. According to the famous “Big Mac” PPP indicator, it’s the most overvalued currency in the world! (Fortunately, I’m a vegetarian so this doesn’t necessarily affect me.) 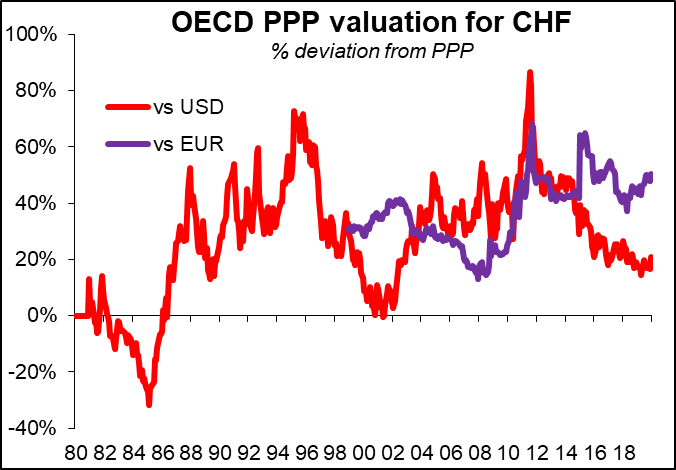 As a result, inflation has been below 1% since November 2018 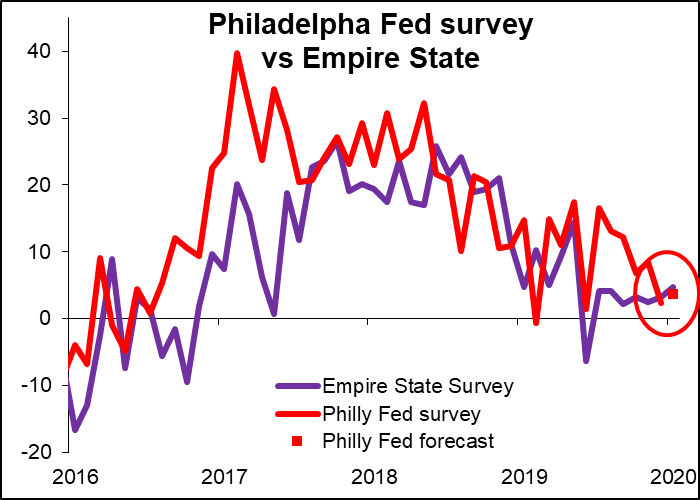 and recently has been around zero. 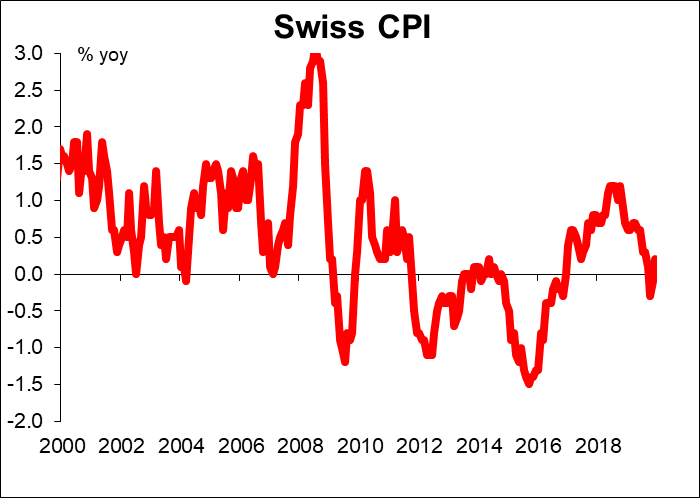 With interest rates already the lowest in recorded history, it’s hard to see what else the SNB can do to defend its currency and its economy. Unless and until Swiss investors increase their appetite for foreign assets – already at a record high – and recycle more of the trade surplus, there’s going to be upward pressure on CHF. That leaves only the SNB to recycle the money via intervention. I expect that the SNB will continue to intervene, but this is not likely to offset entirely the upward pressure on CHF. I expect the currency to continue to appreciate. 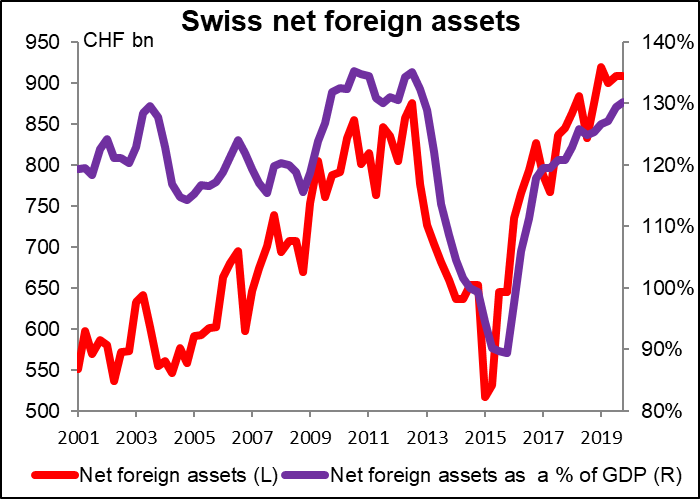 There’s not much coming out today during the European day. The only point of interest is the minutes from the ECB’s 12 December meeting. This was the first meeting chaired by new ECB President Lagarde and so it should be interesting to see how she managed the discussion. There are several other new people on the Governing Council as well. The new dynamics will be under the microscope for some time as people try to figure out if the new crowd is more hawkish or dovish than the previous group. Of particular interest, this time will be any discussion about the review of monetary policy that Lagarde has promised.

When the US market opens, we get the Philadelphia Fed business survey. It’s expected to be up somewhat, similar to the movement in the Empire State manufacturing survey yesterday. That could be slightly dollar positive, although yesterday’s figure didn’t do much to support the currency so it’s doubtful whether today’s will, either.

More important is the US retail sales, since some 70% of the US economy is consumption. The headline, or “advance,” figure is likely to be weighed down by weak auto sales. Sales excluding autos are forecast to be higher following a relatively weak November figure, which was probably due to the late Thanksgiving. Overall though US retail sales have been pretty lacklustre recently, and this figure probably won’t do anything to dispel that view. USD negative 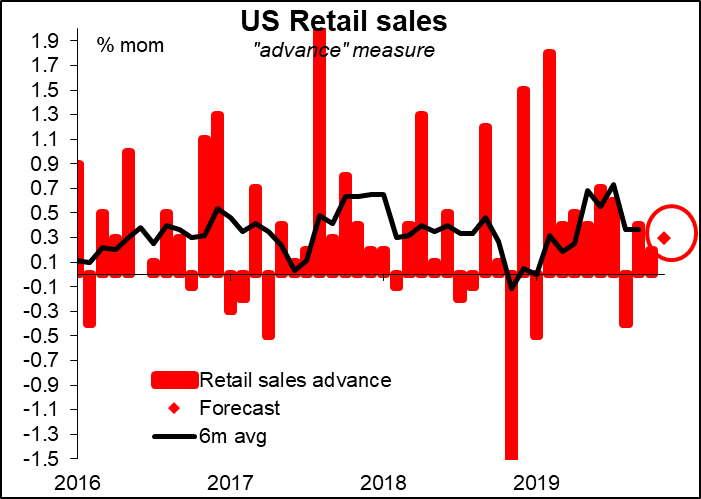 Overnight we get the monthly trio of China indicators, plus the crucial quarterly GDP figure. GDP is expected to come in at 6.0%, which, given that that was the bottom of the government’s target range, should be no surprise. 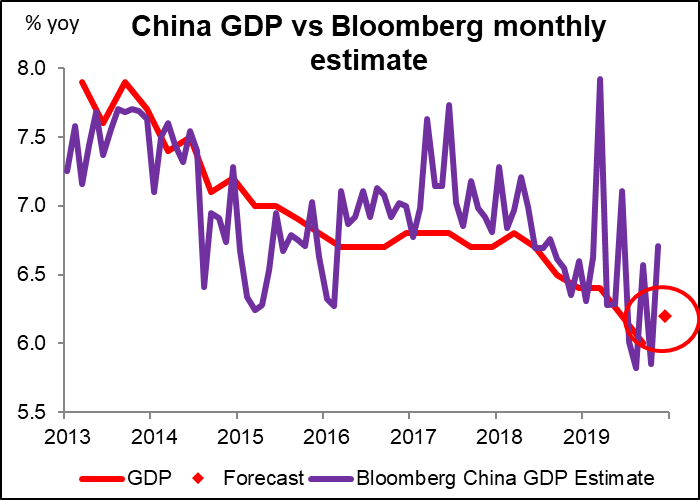 As for the other three – retail sales, industrial production and fixed asset investment – they’re forecast to be little changed from the previous month, just a slight slowdown. But even if people believe these indicators, things have changed for China with the signing of the Phase One agreement, so these numbers are likely to be seen as history that’s not necessarily predictive of the future. 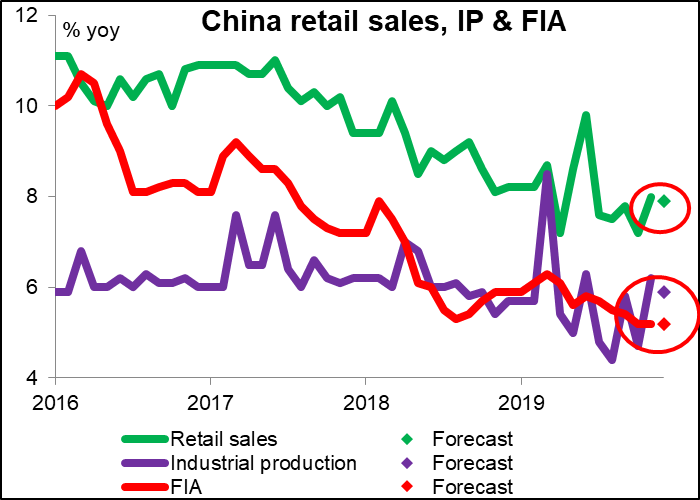 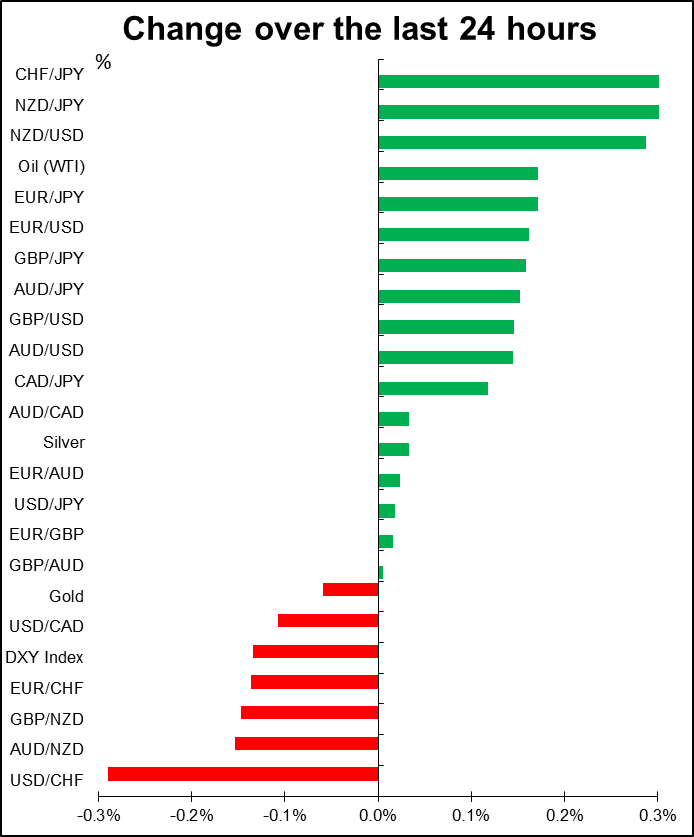