You are at:Home»MARKET PREVIEW»Central Banks Bring out the Bazookas, but Fail to hit their Target; Empire State Index, Eurogroup Meeting 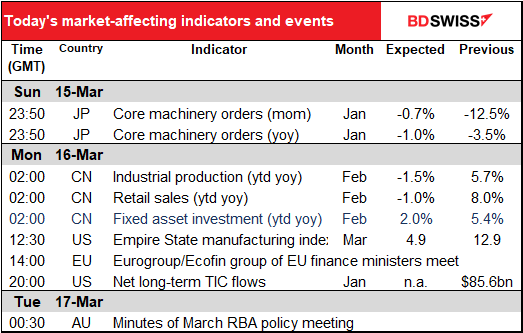 We finally got that round of coordinated moves that the G7 was talking about some time ago. On Friday, the Bank of Canada cut rates another 50 bps to 0.75% in a coordinated move with Finance Minister Bill Morneau, who said he would deliver a fiscal stimulus package this week. Morneau used Draghi’s famous phrase and said he would do “whatever it takes” to keep the economy going. Meanwhile the Bank of Canada said it “stands ready” to act again if necessary.

Then Monday morning New Zealand time, the Reserve Bank of New Zealand (RBNZ) got the week off to a flying start by slashing its Official Cash Rate (OCR) by 75 bps to 0.25%. To drive the point home, it said that it will remain at this level for at least 12 months. The RBNZ’s statement added that if they needed to act again, they’d prefer to implement a quantitative easing program rather than cut the OCR further.

Shortly after, the US Fed came in and fired what former US Treasury Secretary Henry Paulson would’ve called a bazooka:  The Fed cut the Fed funds rate by a full 100 bps  to a range of 0%-0.25%, matching the record low hit during the 2008/09 Global Financial Crisis, and said that they will keep rates at that level until “confident that the economy has weathered recent events and is on track to achieve maximum employment and price stability.” That kind of forward guidance should amplify the effectiveness of the move by encouraging investors to borrow money, safe in the knowledge that rates won’t rise soon.  The Fed also announced several other measures to improve liquidty in the US financial markets, such as promising to buy at least $700bn in bonds, cutting reserve requirements for banks to zero, and letting banks borrow at the discount window for up to 90 days.

One of the main reasons why the dollar has been strengthening recently is companies drawing down their bank credit lines, which forces banks around the world to go into the market and acquire dollars to lend out. Some of this is done through currency swaps, which pushes the dollar up. To counter this problem, the Fed lowered the rate on USD liquidity swap arrangements with other central banks by 25 bps. So far that hasn’t done much to narrow the basis swap, but it may be significant that at least it hasn’t widened out today, either. 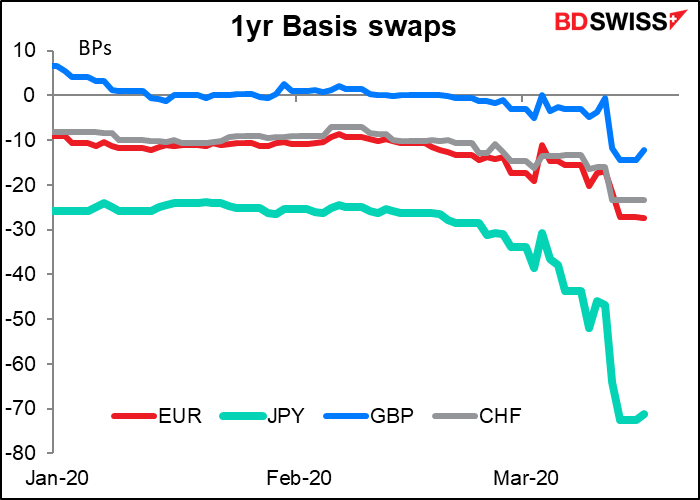 Then when Japan opened for business, the Bank of Japan doubled its target for the net purchase of exchange-traded funds (ETFs) to JPY 12tn annually. The BoJ also introduced a new lending program to help businesses hit by the virus. It didn’t change its interest rate targets. 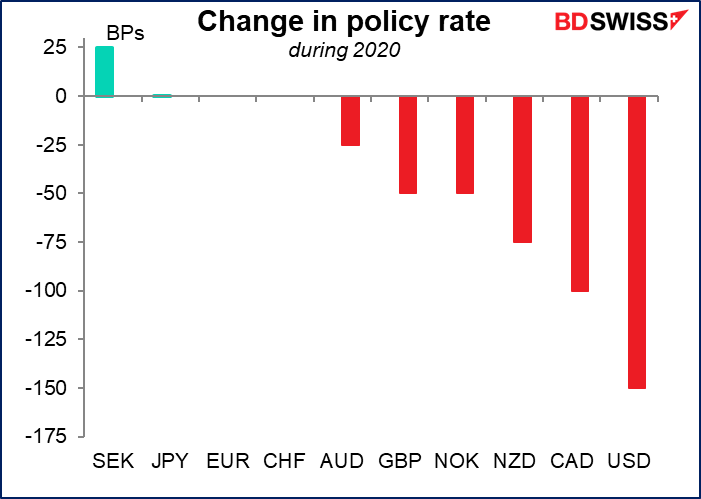 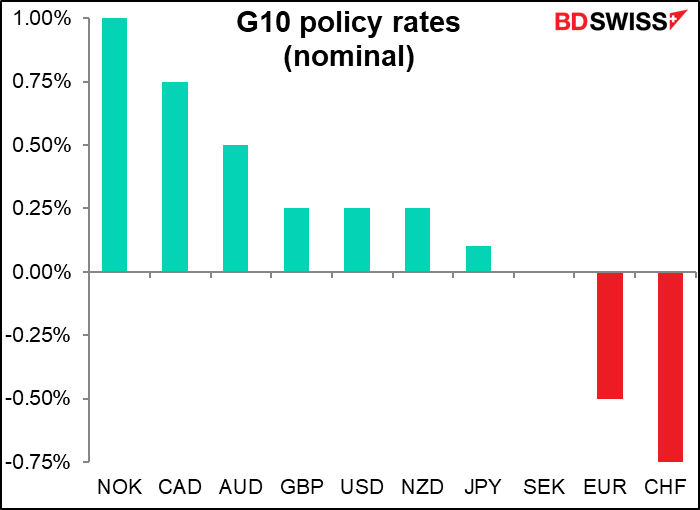 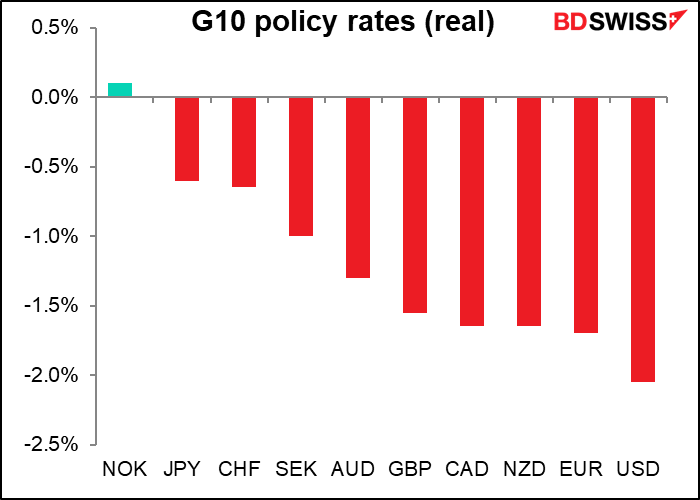 Did the moves help? Not as much as you might have expected! The Tokyo market is up after the BoJ doubled its ETF buying target, but all other Asian stock markets are down, down, down this morning. The S&P 500 stock index futures are indicated limit down, -4.8%. There’s now talk that maybe the authorities will shut the markets until this affair blows over.

The reason the markets were left unimpressed by what was a stunning round of intervention is simple. As Fed Chair Powell said, “The thing that fiscal policy, and really only fiscal policy can do, is reach out directly to affected industries, affected workers…” Monetary policy is a broad, blunt tool. What’s needed is more direct support to industries that are hit directly by the virus. That can only be provided by fiscal policy, and governments have not shown the same swift reaction that central banks have. In the US, the Republican Party squashed efforts to provide sick pay leave for most workers; instead, all Congress could do was to pass a bill that looked like it was providing such aid but in fact left loopholes that would allow some 80% of companies off the hook. Contrast this with other countries, such as Ireland, where the government itself pays workers who are home sick if their company doesn’t provide sick pay.

JPY has been strengthening this morning, but remains below where it was on Friday morning. The currency weakened substantially on Friday as the US Congress’ half-baked, smoke-and-mirrors plans to rescue the economy managed to fool the markets temporarily into a “risk on” mood, but this morning “risk off” is back with a vengence and JPY is coming back.

AUD on the other hand is doing poorly on expectations that the Reserve Bank of Australia (RBA), which cut its cash rate by 25 bps at its last meeting on 4 March, is likely to announce some quantitative easing (QE) measures soon. It’s notable that while  JPY weakened on Friday on a “risk on” mood, AUD didn’t benefit at all during that period. I think the market just really hates the Aussie nowadays (see Commitments of Traders report comment). AUD is unusual in that the expectations of a narrowing interest rate spread between it and USD have done nothing to support the currency, in contrast to EUR and JPY, for example. 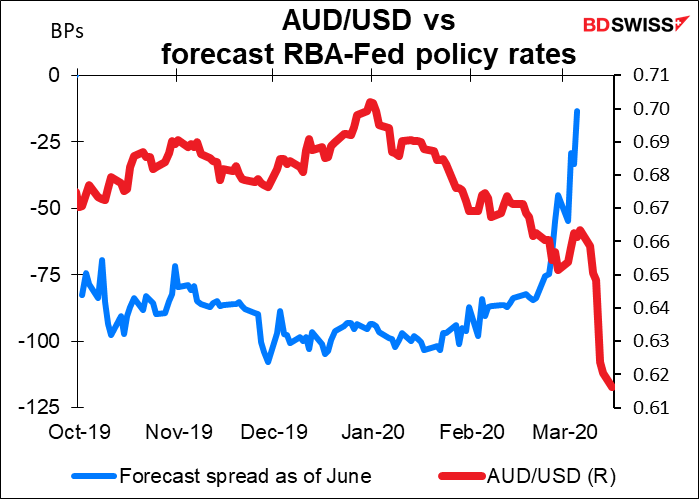 CAD was the #1 gainer. That may be because of the Canadian government’s clear commitment to using fiscal policy as well as monetary policy. When they made their announcements on Friday, Bank of Canada Gov. Poloz and Finance Minister Bill Morneau spoke together in a joint press conference. Taking a leaf from former ECB President Draghi’s successful playbook, Morneau said he would do “whatever it takes” to keep the economy afloat. He announced some measures – such as adding CAD 10bn in new funding for the country’s two business financing agencies – and said he’ll  announce the full package this week. The BoC’s monetary measures include buying Bankers’ Acceptances, a money-market instrument used by SMEs. That’s an efficient way to funnel money to companies hit by the virus. Moreover, the banking regulator eased up on capital requirements for banks. And some “social isolation” measures were put into effect:  Quebec closed several kinds of businesses until end-March, for example.

I think Canada’s coordinated fiscal/monetary response, plus the rapid measures to deal with the virus, may be encouraging investors to buy CAD. I expect the market to buy currencies on a FIFO basis – first in, first out. That is, the currencies to buy are those of countries that are taking the first measures to deal with the crisis, because they will also be the first ones to get over it.

Once again the overriding trend was simply cutting positions. Most of the currencies saw a net reduction in positioning, whether it was short or long.

The only currency showing an increase in positioning was AUD, where specs added to short positions. AUD is the benchmark “risk on” currency and would be the natural short under today’s conditions, although personally I like CAD better as it is more sensitive to oil prices. But specs trimmed their CAD shorts, too.

It’s noticeable that although they added to AUD shorts, they cut JPY longs. So they really are focused on AUD itself, not the “risk on/risk off” pair of AUD/JPY. 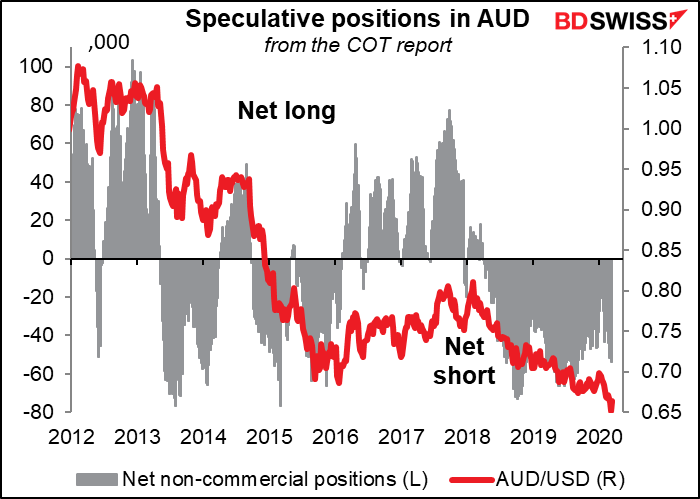 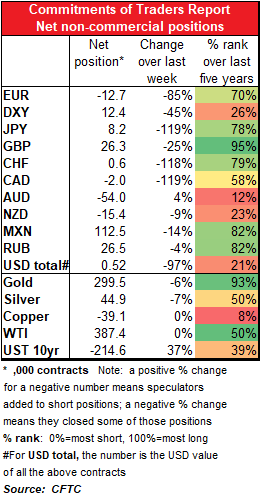 Not much on the schedule today.

I went into a lot of detail in the weekly about the the first two of the Fed’s monthly surveys, that is, today’s Empire State manufacturing survey and the Philadelphia Fed business survey. Both of these are for March and so represent some of the most up-to-date information we can have (see the Weekly for details of when the survey goes out etc.

Both surveys are expected to be sharply lower, but to remain in positive territory. That would be great news, although I’m not sure how relevant it is for now – so much activity has shut down, at least in the service sector (both of these surveys are of manufacturing enterprises, which has been hit less than service-sector companies). I think any positive number would be positive for the dollar, if indeed the markets are responding to economic data. 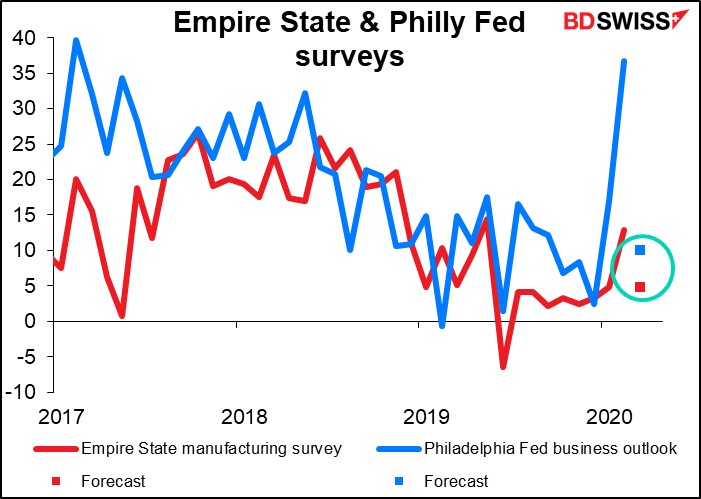 For the Eurozone, the focus is on today’s Eurogroup/Ecofin meeting of the EU finance ministers, followed by the Economic and Financial Affairs Council meeting tomorrow. The official agenda for today’s meeting says “Ministers will take stock of the economic situation and discuss responses to the economic policy challenges related to the COVID-19 outbreak.” Friday, the European Commission issued a statement saying it “will use all the instruments at its disposal to mitigate the consequences of the pandemic…” We’ll be interested to hear any more details on coordinated measures that they might be taking. But most actions will be done at the national level though, so we should be looking for announcements from individual countries throughout the week on just what measures they plan to take to support their economies.

Overnight the Reserve Bank of Australia (RBA) releases the minutes of its recent (3 March) meeting, when they cut the Cash Rate by 25 bps. I doubt if there will be any revelations in it though, and the situation is changing so fast anyway I wonder how relevant any of it is. 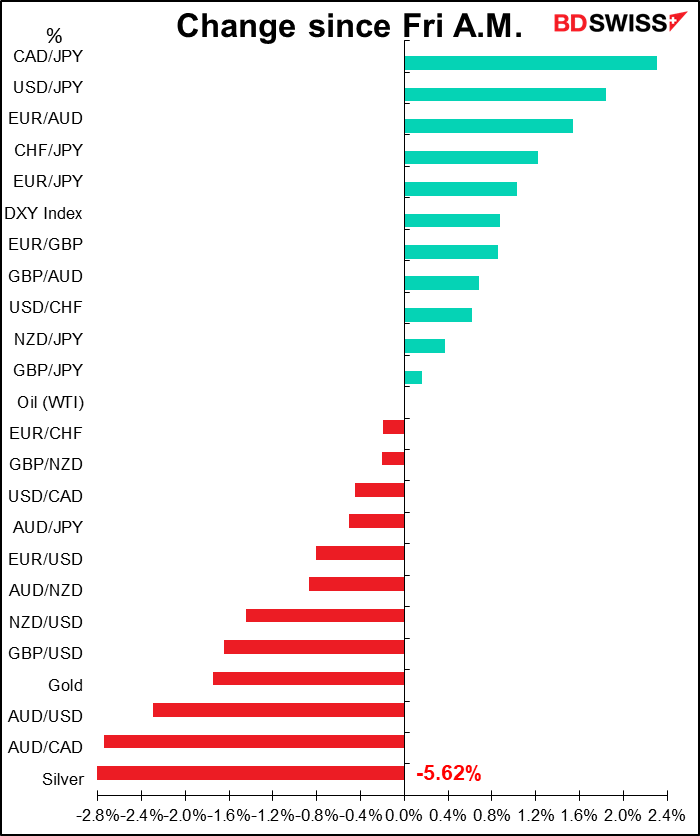