You are at:Home»MARKET PREVIEW»CAD Up on continued BoC Bullishness, USD Down on “Risk-On” Mood; NFP

It was the ol’ “good news is bad news” for the dollar as a larger-than-expected fall in jobless claims pushed stocks up but the dollar down sharply. The widely watched but conceptually meaningless Dow Jones Industrial Average hit a record high, although the more accurate S&P 500 didn’t.

Just to recap for people who perhaps can’t understand why good news for the economy would send the dollar down: the dollar is trading nowadays as a “safe haven” currency. That is, when times get bad, people go into it for the perceived safety of the extremely liquid US Treasury market, but when times are good, they buy currencies that are more leveraged to global growth, like AUD or – today for example – CAD. Remember, a currency isn’t the stock price of a country. There’s a lot more that goes into its formulation.

Why CAD again? No specific trigger. On the contrary, oil prices fell, yet USD/CAD continued to decline. At 1.2143 it’s approaching the 2017 low of 1.2110 (that’s by no means the record low for the pair, just the lowest it’s been since around 2015.) I suppose it’s just continued bullishness for the currency based on the Bank of Canada’s recent move to taper its bond purchases.

Given CAD’s recent rally – it’s been the best-performing G10 currency this week, up 1.01% vs USD so far – there could be some profit-taking on today’s Canadian employment data, which is expected to be bad (see below).

Speaking of tapering bond purchases, the Bank of England tapered its bond purchases yesterday as expected but insisted that it wasn’t a taper. They cut the weekly bond purchases for the Asset Purchase Facility (APF) to GBP 3.44bn a week from 4.44bn, but Gov. Bailey stressed in his press conference that the move was by no means a policy signal, but rather just a mechanical change to the Bank’s bond buying scheme to ensure that the remaining GBP 150bn they planned to spend was spread across the year. Their initial plan of GBP 190bn in purchases this year implied an average pace of GBP 3.8bn a week, but they started out at a higher GBP 4.4bn, meaning it’s a natural adjustment to the pace to fit with the initial terms.

The next question is whether they continue buying for the APF in 2022, especially as bonds in the facility mature. (That would imply buying around GBP 800mn a week.) Do they reinvest the maturing bonds? That will be a topic of discussion later in the year. 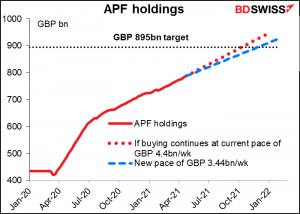 Otherwise, they kept all their policy settings unchanged, as expected.

The Monetary Policy Report (MPR) did upgrade the forecasts across the board, but with big increases in both demand and supply, their forecast for the output gap in 2023 was unchanged from the February MPR.

The MPC will continue to monitor the situation closely and will take whatever action is necessary to achieve its remit. The Committee does not intend to tighten monetary policy at least until there is clear evidence that significant progress is being made in eliminating spare capacity and achieving the 2% inflation target sustainably.

At the last meeting in March, they said:

The MPC will continue to monitor the situation closely. If the outlook for inflation weakens, the Committee stands ready to take whatever additional action is necessary to achieve its remit….

Notice that in March they said, “if the outlook for inflation weakens,” but this month they only said “will take whatever action is necessary.” That implies they’re thinking of the upside risks to their forecasts, too. This was no accident. Gov. Bailey emphasized this point in his press conference. This shift to a more balanced view of the risks is significant. It’s the first step toward getting back to normal.

Surprising to me then that GBP weakened. I think that was probably because of Gov. Bailey’s emphasis that they weren’t tapering, plus perhaps the move was well discounted anyway.

And then there’s always the UK local elections. Those results may boost GBP today after the Conservative Party won the only Parliamentary seat up for grabs, in Hartlepool. The Tories had never won that seat – it had always been Labour since it was created in the 1970s. The Conservatives were also winning in the other local council election results that have come in. This indicates that the political realignment in 2019 wasn’t just a one-off Brexit-related fluke but a real turning point in UK politics. Of course, the basis of that is the Conservative Party adopting a lot of Labour’s policies, but never mind.

I think we could see a bounce back in GBP today, particularly if the Scottish National Party (SNP) is seen to do badly in the Scottish elections. I don’t think we’ll be getting any exit polls though so we might not have a clear idea of the results there until the weekend. 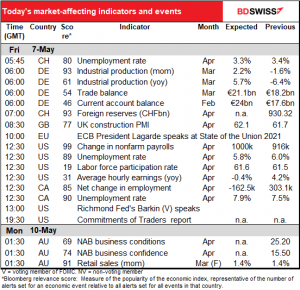 There’s this-and-that coming out today, but of course the main focus will be on the ever-popular US nonfarm payrolls (NFP).

The market consensus has been creeping up over the week from 925k a week ago to +1.0mn today, and the Bloomberg “whisper” – which is just a bunch of random Bloomberg subscribers guessing – is +1.045mn. Economists’ estimates range from +700k to an extraordinary +2.1mn. This is despite Wednesday’s ADP report missing expectations (+742k vs +850k expected). 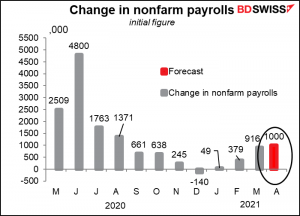 Would this kind of number, coming after March’s +916k gain, qualify as the “string of months” of good numbers that Fed Chair Powell said would be necessary to declare victory and begin thinking of tapering down the Fed’s bond purchases? Atlanta Fed President Bostic yesterday said he wouldn’t be surprised to see a +1mn gain in jobs today, and yet noted that the economy is still some 8.5mn jobs short of where it was before the pandemic. “We are not out of the woods,” he said.

Gov. Bostic’s comments were particularly significant as earlier this year he had seemed to be more ready to talk about “thinking about thinking about” tapering than some other Committee members. That even he’s saying this now implies some unanimity of opinion on the FOMC, or at least a commitment to remain on message (Dallas Fed President Kaplan’s recent comments notwithstanding)…

In any case, Gov. Bostic is right. The US is doing badly compared to other countries, thanks to the national policy of paying people unemployment insurance rather than paying companies to keep people employed. 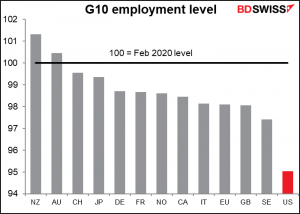 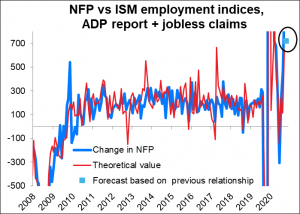 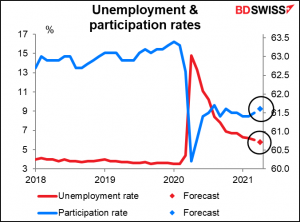 We’ve seen some good volatility in the FX market on NFP days recently, although not always. It doesn’t seem to be consistent with whether the figure missed or beats expectations. 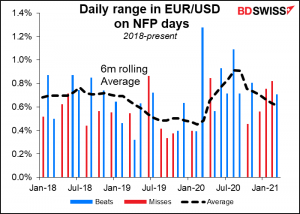 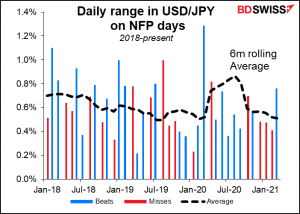 Canada also announces its employment data at the same time. It’s expected to go backward: employment falling and unemployment rising thanks to the re-imposition of lockdown measures during the month. C’est la vie nowadays. Anyway, we saw in February (+259k) and March (+303k) what can happen when the economy opens up again so I don’t think this will affect anyone’s thinking very much.