You are at:Home»MARKET PREVIEW»CAD Up, CHF down on Modest “Risk-on” Mood; US Durable Goods orders A modest reversal yesterday as investors were encouraged by indications that House Speaker Pelosi and Treasury Secretary Mnuchin are willing restart the stalled talks on another stimulus package. I wouldn’t get too excited about this; both sides need to appear like they’re willing so that they can’t get blamed for the failure of talks. But at the end of the day, I think the philosophical gap between the two sides is too far to bridge in the limited time before the elections.

Regardless of what I think, stocks managed to finish slightly higher (S&P 500 up 0.4%) with a general “risk-on” feel in the FX market. It was a volatile day though as sentiment is swayed by the rise (both globally and domestically) in COVID-19 cases, some weak economic data (an unexpected rise in initial jobless claims), and astonishing questions about whether Trump will accept the results when he loses the election. Although the S&P 500 closed a little higher, at one point yesterday it was actually down year-to-date, which is a big reversal from its record-high closing level earlier this month when it was up by +10.8% ytd.

GBP gained after UK Chancellor of the Exchequer Sunak announced several measures to support the economy, including a new GBP 5bn plan to support the labor market for six months by paying people a full-time wage for working only part-time.  The measures also included a new loan program and an extension of VAT cuts for the hospitality sector to encourage more people to go to restaurants & pubs and get infected. Don’t get too excited by the price action though; the Brexit talks start up again next week and there will be plenty more opportunities for GBP disappointment.

CHF on the other hand was the worst-performing currency.  EUR/CHF popped by a few pips after the Swiss National Bank (SNB) announced its decision, which was virtually a photocopy of the previous decision but didn’t really take off until the US trading day started.

That may be because of one twist to the decision:  in a separate announcement, the SNB said it will publish figures on the volume of its intervention quarterly rather than annually as at present. SNB President Jordan said the decision came in response to heightened public interest both in Switzerland and abroad. One place that’s shown interest is the US Treasury, which has Switzerland on its watchlist for countries that may be manipulating their foreign exchange rates. “Treasury continues to encourage the Swiss authorities to publish all intervention data on a higher frequency basis,” the latest report said. Switzerland hasn’t cut back its intervention noticeably since it first appeared in the Treasury’s little booklet, but yesterday’s move confirms that the SNB’s gnomes are reading it and are subject to political pressure, at least to some degree. The move may also make the SNB’s intervention less suspenseful and therefore less effective.

But of course anything that reduces the SNB’s intervention or its effectiveness would cause EUR/CHF to fall, not rise (i.e. CHF to strengthen). The rally in EUR/CHF (red line) seemed to have a lot to do with the sell-off in Bunds (blue line), which perhaps increased the attraction of EUR-denominated assets for Swiss investors.

A light schedule today. The only major indicator is US durable goods orders.

After several months of wild swings, we’re expecting to be back to the normal range of monthly variation. The rise in the headline figure is expected to be modest as orders from the auto sector slow. 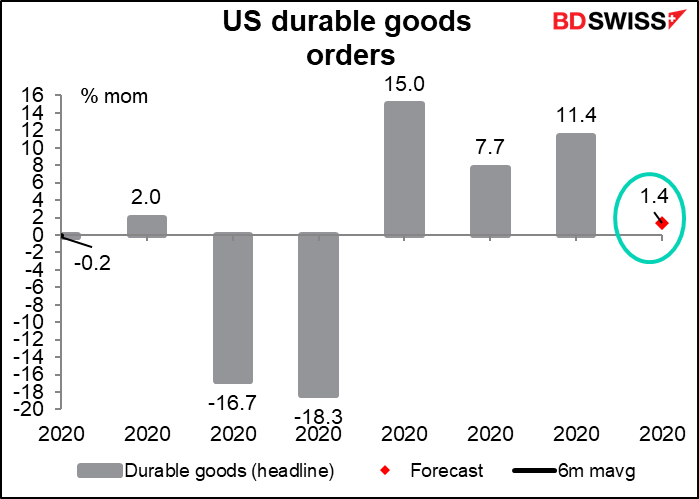 The forecast 1.4% mom rise would still leave orders down 3.9% from pre-pandemic levels. I think that may just add to the gloom around recent US indicators and prove somewhat negative for the dollar.