You are at:Home»MARKET PREVIEW»CAD Plunges on Worried BoC, GBP up on CBI Trends; ECB Meeting 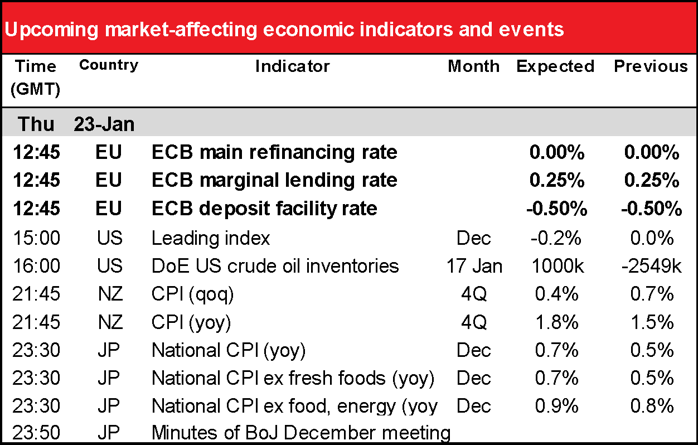 A double whammy for CAD! First off, the Bank of Canada (BoC) statement was extremely dovish, contrary to what some analysts (including me – mea culpa!) had expected. I expected that with the USMCA passing through Congress and the US-China “Phase One” agreement signed, they would be less worried about the trade picture and more confident about the future. No way Jose! All they said about trade was that “some recent trade developments have been positive.” Great! But as for Canada, they said “growth in the near term will be weaker, and the output gap wider, than the Bank projected in October.” In December they said inflation was “consistent with an economy operating near capacity;” this time they said it was “consistent with an economy that, until recently, has been operating close to capacity” (emphasis added). That implies that maybe the economy currently isn’t operating close to capacity anymore, meaning that there could be some downward pressure on inflation. And the guidance was much more dovish:  they said “In determining the future path for the Bank’s policy interest rate, Governing Council will be watching closely to see if the recent slowdown in growth is more persistent than forecast.” That implies they see the major risk being to the downside.

Adding insult to injury, oil prices plunged over 4% yesterday as worries about the impact of the Chinese coronavirus caused concerns about global growth.

The result was a substantial repricing of the risk of a Bank of Canada rate cut and a plunge in the currency. 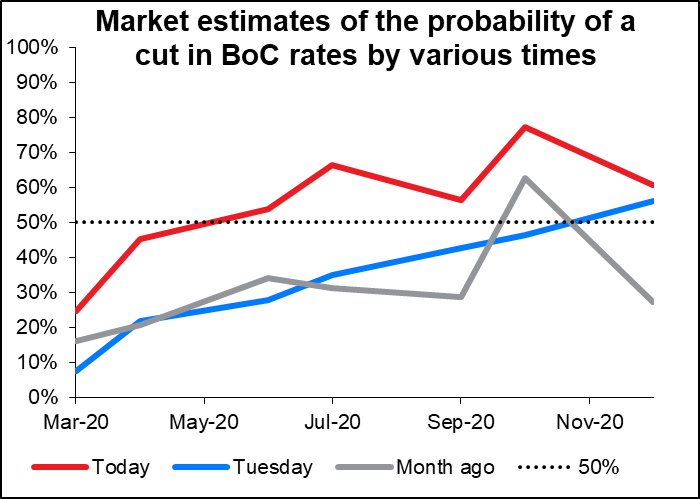 We’ve seen several times over the last year how a Bank of Canada meeting can set off a sustained trend in USD/CAD that lasts until the next meeting (at least). This is likely to be one of those periods as well, in my view. While I disagree with their view and think that the global situation is actually improving, we’ll have to see that in the data before they change their mind. CAD bearish 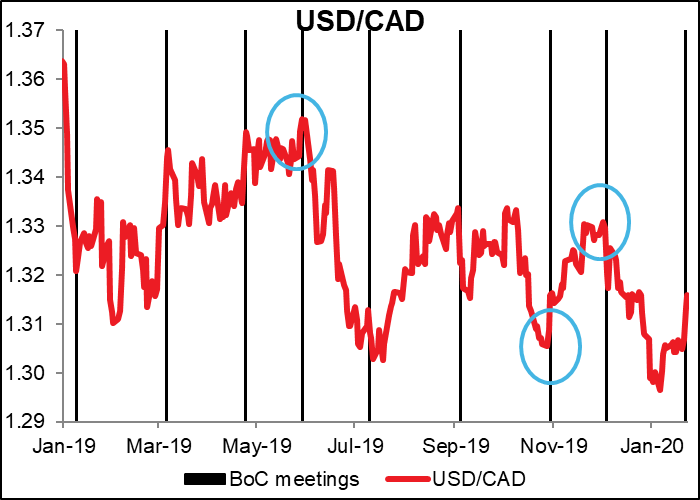 The other notable mover on the day was GBP, which gained after the Confederation of British Industry (CBI) trends survey showed a fantastic leap in business optimism. The index had been expected to improve from -44 to -20; that in itself would’ve been a marked improvement. But instead it soared into positive territory at +23. Maybe this shows what getting Jeremy Corbyn out of the way does for Britain?

By the way, feeding those results into my little regression analysis turns out an estimate for tomorrow’s manufacturing PMI of an amazing 51.9. No guarantees though! 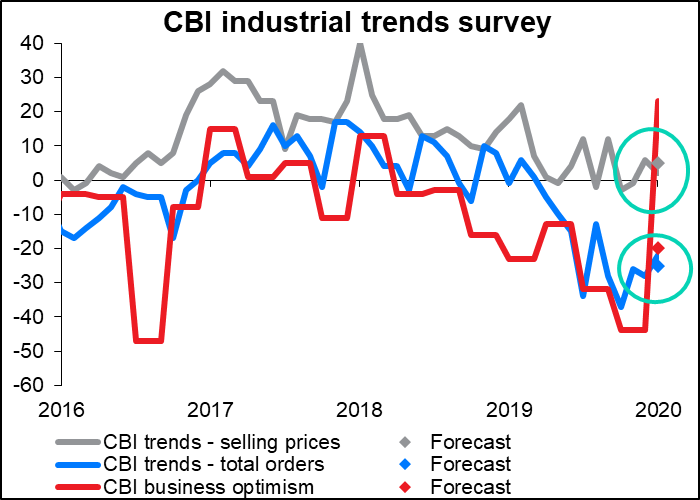 The focus today will of course be on the European Central Bank (ECB) Governing Council meeting. This is the third central bank meeting of the week and frankly, it’s likeliy to be the least interesting.

As it stands now, the market doesn’t have any good idea about what they’re likely to do this year. According to the market estimates, they’re about as likely raise rates this year as to lower them. But even so, the odds of either a cut or a hike by the end of the year. 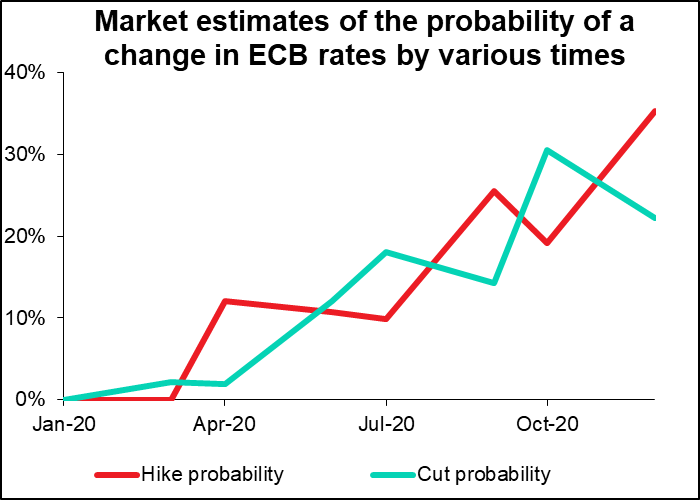 The market has been thinking recently that rates are likely to stay unchanged for most of this year, but in the last few days that idea has taken a hit and the odds of a rate hike have increased. 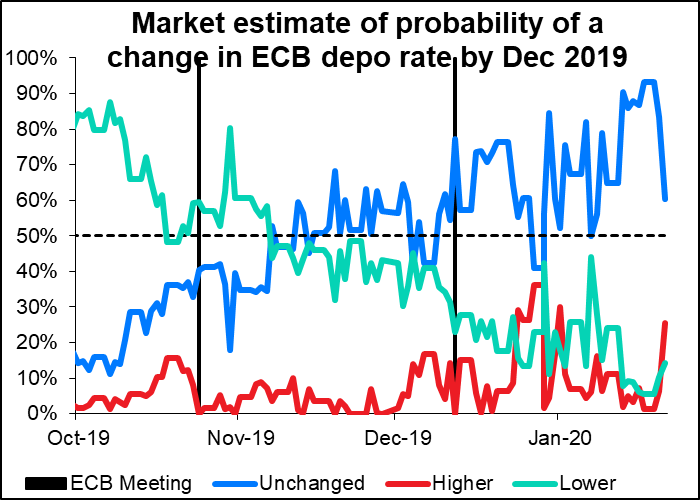 At their December meeting, they upgraded their view on the Eurozone economy somewhat – the statement said that “The risks surrounding the euro area growth outlook, related to geopolitical factors, rising protectionism and vulnerabilities in emerging markets, remain tilted to the downside, but have become somewhat less pronounced.” (emphasis added).Given the further improvement in the trade picture since then, they could well upgrade their view further, but I don’t think anyone believes they’re out of the woods yet – they’re still likely to retain their easing bias (“…the Governing Council continues to stand ready to adjust all of its instruments, as appropriate, to ensure that inflation moves towards its aim in a sustained manner, in line with its commitment to symmetry.”)

The ECB could be encouraged by a modest rise in the German and EU-wide manufacturing purchasing managers’ indices (PMIs) for January, but unfortunately those aren’t due out until tomorrow, and in any case, the PMIs are still in contractionary territory. Besides, the Trump regime is still taking aim at the crucial German auto industry, so the improvement in the outlook may be muted for now.

Furthermore, ECB President Lagarde – like Draghi before her – wants to reduce the EU’s dependence on monetary policy and shift the burden of stimulating the economy onto fiscal and structural policy. The Strategic Review of monetary policy that she’s announced, which will look “all and every issue,” will apparently take most of the year. They can of course still change rates while the review is going on, but it would make sense to dampen expectations when the whole aim and structure of policy might be changed soon. Lagarde can use the Review to put off difficult policy questions and keep to the current course for the time being. That’s what I would expect.

Given the improvement in the trade picture but the difficult conditions currently, I’d expect the ECB to upgrade its view slightly but make no significant changes in its guidance. It’s likely just to reiterate its commitment to its current stance at this meeting. Nothing more. I think the meeting is shaping up to be a big nothingburger.

Following the meeting, there’s not much on the schedule until the Asian day begins, at which point we get two sets of inflation numbers. However, neither of them is likely to be particularly market-moving if they come out as expected.

The New Zealand consumer price index (CPI) is forecast to accelerate a bit on a yoy basis. However since it’s been well within the Reserve Bank of New Zealand’s (RBNZ) target range for three years now, it’s clear that inflation – or fear of deflation – isn’t the major motivating factor for the RBNZ. And in any event, the market sees only a 30% chance of a rate cut this year, so a modest rise in inflation back towards the midpoint of their target range probably won’t cause a big change in rate expectations, either. NZD neutral. 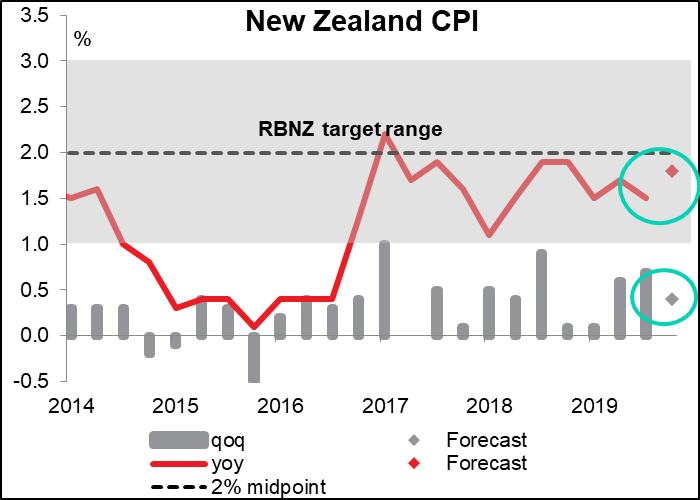 And then comes the most boring of the global CPIs, the Japanese national CPI. I say “boring” because a) it rarely changes very much, and b) now that the Tokyo CPI comes out two weeks beforehand, its meager impact has been further diluted. In fact it’s more just “for the record” than anything else. Wake me up when it starts to get near to the Bank of Japan’s 2% target. Will I still be working then? I hope not. The five year/five year inflation swap – which forecasts what inflation will be in five years from now – is currently at 0.12%, i.e. substantially lower than today’s (forecast) 0.7% inflation rate. JPY neutral. 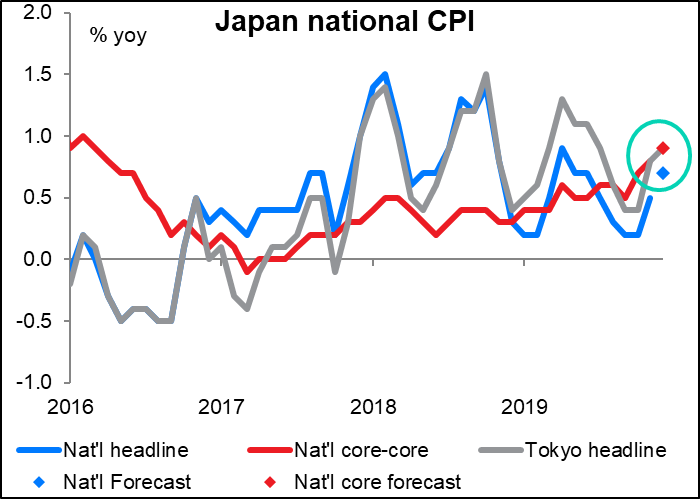 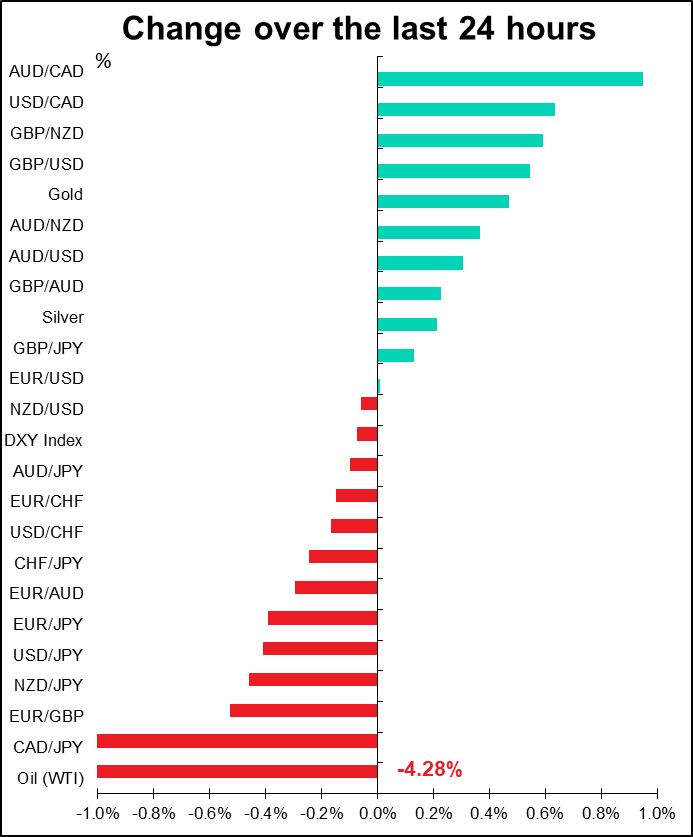