You are at:Home»MARKET PREVIEW»CAD Falls as Bank of Canada Cuts 50 bps; OPEC Meeting 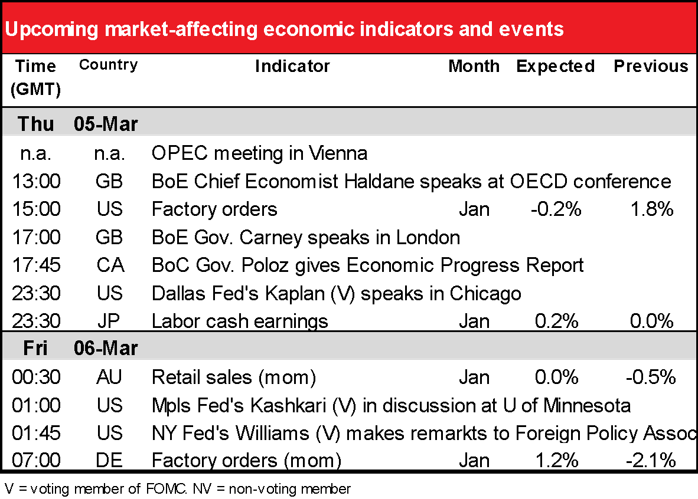 The Bank of Canada (BoC) cut its policy rate by 50 bps and left the door open for further rate cuts. It said the coronavirus outbreak presents a material negative shock to the Canadian and global economic outlooks and that “in light of all these developments, the outlook is clearly weaker now than it was in January. As the situation evolves, Governing Council stands ready to adjust monetary policy further if required to support economic growth and keep inflation on target.”

The market is still assuming further rate cuts – it’s priced in one more 25 bps cut at the June meeting and a good chance of another cut by the December meeting. 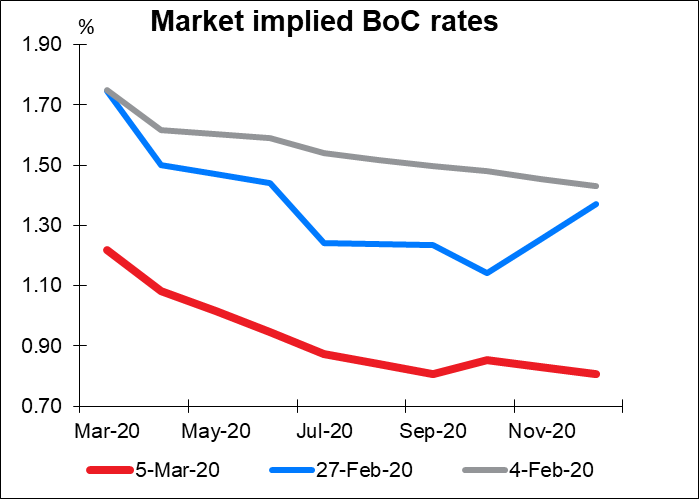 For the moment the easing bias is resulting in a weaker CAD, but I’m not sure how long that effect will last, since probably every central bank is going to shift to an easing bias eventually if they aren’t there already. CAD though has the additional problem of weak oil prices. As we discuss below, OPEC+ is having a hard time shoring up oil. As this crisis drags on, oil prices are likely to fall further, in my view, and that – together with an easier monetary bias — is likely to drag CAD down further (i.e., push USD/CAD higher). 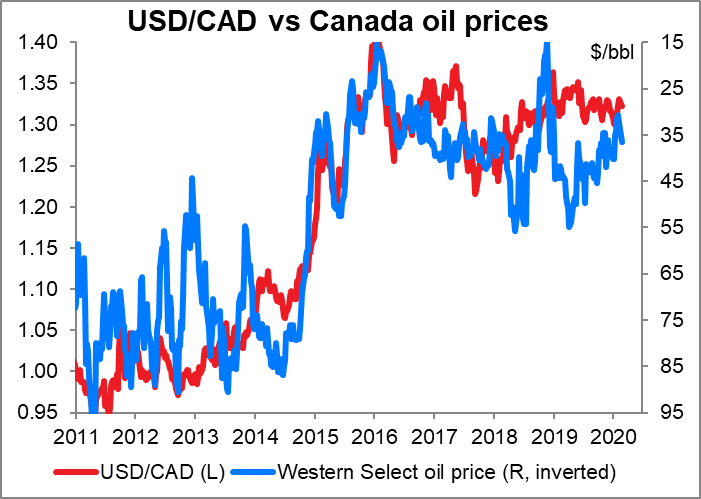 The US-Canada rate differential plus oil prices explain most of the movement in USD/CAD. A simple little model made up of the difference between the Fed funds target and the Bank of Canada’s overnight rate plus the Western Select oil price explains about 84% of the movement of USD/CAD. 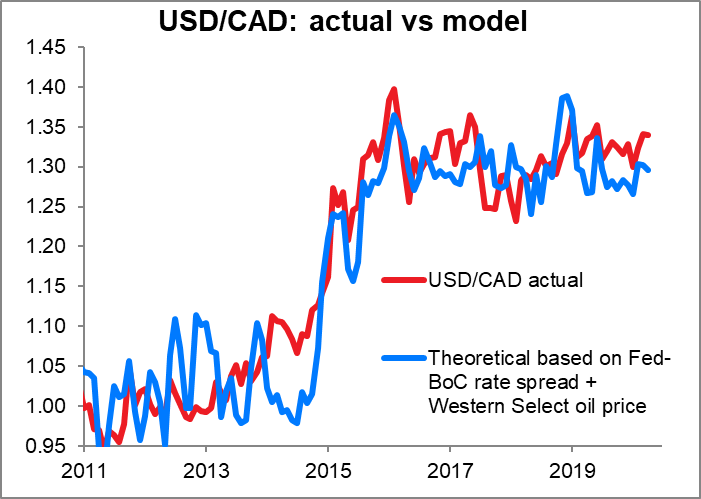 The other question for the pair then becomes whether the Bank of Canada will match further Fed rate cuts. The market says no, because investors expect another 50 bps rate cut at the FOMC meeting on 18 March. In that case, we could see USD/CAD moving lower (i.e. CAD strengthening) if the oil price manages to stay steady. I think it won’t – I think oil is likely to fall further as economic activity slows – and so I expect USD/CAD to move higher over the longer term. But short-term, I expect US rate expectations to dominate and for USD/CAD to fall back somewhat. 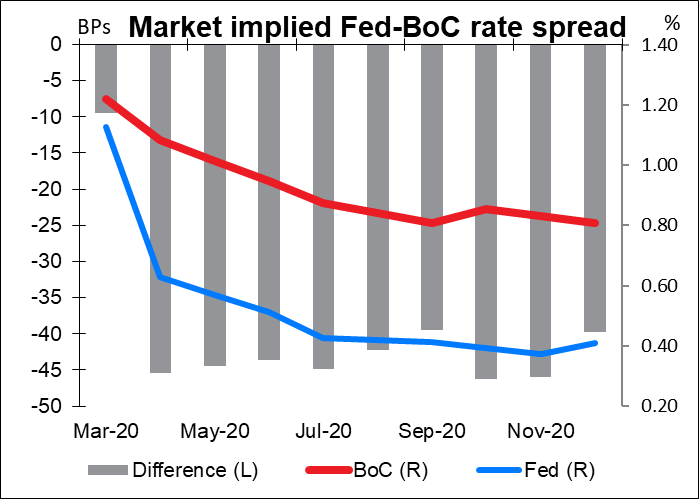 The Fed’s Beige Book, released yesterday, mentioned the coronavirus 48 times. It said the outlook for the near-term growth was modest but pointed to “the coronavirus and the upcoming presidential election as potential risks.”

GBP gained as the incoming Bank of England Governor, Andrew Bailey, implied that the BoE wouldn’t follow the Fed’s emergency rate cut (not to mention the further rate cut expected on the 18th.)  Bailey said that he needed to see “more evidence” of the impact of the coronavirus and added, “We need to think of rebalancing so that fiscal policy has more of a role to play.” That’s actually a good idea, but it usually takes more time for the government to work out a new budget, specific projects, funding etc. than to hold a meeting of a few people and cut rates. The market is looking for a 25 bps cut at the 26 March Bank of England meeting, which will be Bailey’s first. He takes over at the BoE on 16 March.

The big event of the day is the meeting of OPEC in Vienna. The group meets by itself today and together with a number of other oil-exporting countries that aren’t members, notably Russia, as what’s now being called “OPEC+”.

Their problem though is obvious:  their efforts to cut output and thereby shore up the price simply give the US and Canada leeway to sell their oil. The group’s problem lies in the “the.” That is, the official name of the group is The Organization of the Petroleum Exporting Countries. But they are no longer “the” petroleum exporting countries. They are “some of the” petroleum exporting countries. And nowadays, the US is among their competitors. 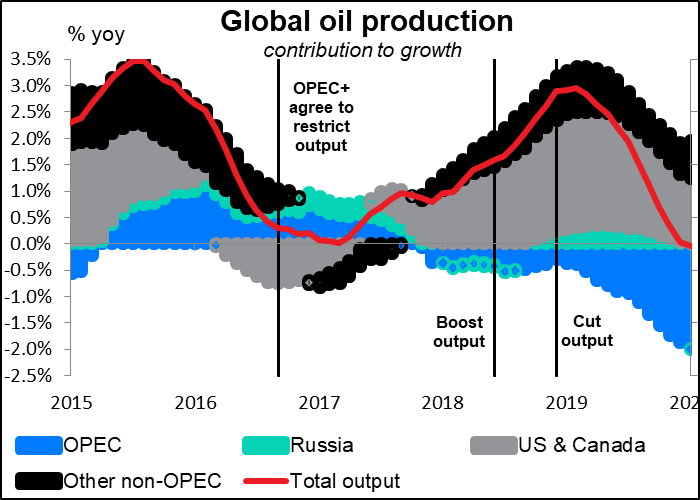 North America and other non-OPEC producers have been pumping an increasing share of the world’s oil output over the last several years. That has eroded OPEC’s ability to keep supply and demand in balance at a price that its members like. 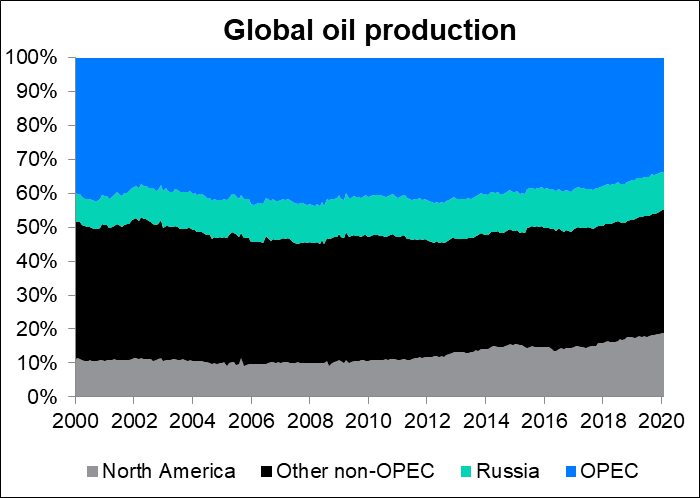 The only reason things aren’t worse for the group is that Iran and Venezuela aren’t able to pump as much oil as they used to – or in the case of Iran, maybe they can pump it but they can’t sell it. 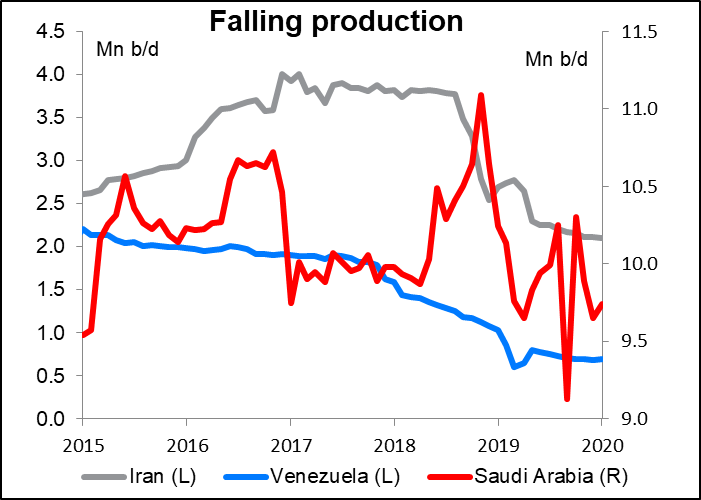 According to press reports, Saudi Arabia wants OPEC+ to agree to cut output by a further 1mn barrels a day (b/d) or more. Some OPEC ministers are thought to be talking about cutting production by a further 1.5mn b/d. On the other hand, Russia, the largest producer outside of OPEC that’s included in OPEC+, wants to maintain the current cuts through to the end of the second quarter. Last month, OPEC’s technical committee recommended a new production cut of 600k b/d.

A Bloomberg survey shows that oil analysts on average expect the group to cut production by 750k b/d. That’s probably the figure to watch for – more than that and the price of oil is likely to go up, less than that and it could go down further.

For reference, total OPEC crude oil production is estimated at 27.85mn b/d, with another 5.3mn b/d of other petroleum products. On top of that, Russia produces 11.3mn b/d, for a total of 44.3mn b/d or more. So they are talking about a cut of at most 2.3% of total OPEC+ production.

When the US opens, we get US factory orders. This is a second-tier indicator that’s usually a function of the durable goods figure and so not so exciting. Durable goods orders were down 0.2% mom so it’s expected that factory orders will be down somewhere along those lines too. USD neutral 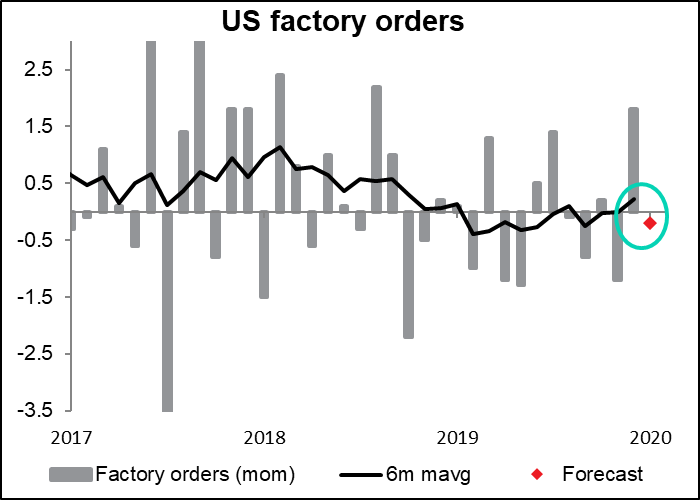 Overnight, Japan announces its labor cash earnings. In my view, this should be a big indicator for Japan, as it’s the equivalent of the average hourly earnings figure in the US and the average weekly earnings in the UK, both of which are important for those countries. However, it’s not, particularly after the agency that compiles the data was caught lying – it was using a much smaller sample size than it claimed to be. Also, since no one expects the Bank of Japan to change its policy any time soon regardless of what the indicators say, the link between economic indicators in general and interest rates has been broken.

Nonetheless, I’m keenly interested in this data series, mostly because I have a daughter in university in Japan and I’m wondering how much money she’s going to make when she finally graduates and gets a job, whenever that might be. It looks like the answer is, not much more than she’d make if she graduated today – earnings are barely rising at all. Pretty bizarre for an economy with a 2.4% unemployment rate and 1.49 jobs for every applicant. It certainly means that there’s no chance of a wage-pull inflation spiral. That’s JPY negative in theory, although probably not in fact – risk aversion and the COVID-19 virus are going to be the main factors moving JPY for the time being, not the economic indicators anyway. 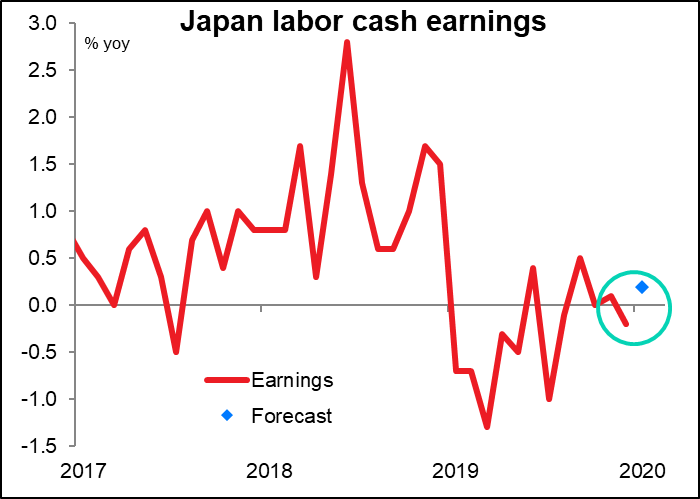 Australia announces its retail sales. Retails sales includes sales in restaurants and cafes, which have been hurt by the bush fires in Australia and the drop in tourism. The market consensus is for no increase following the sharp 0.5% mom fall in December, which was the steepest decline since March 2013. No bounce after a fall like that would be pretty dismal – and some people are even forecasting a further decline. AUD negative 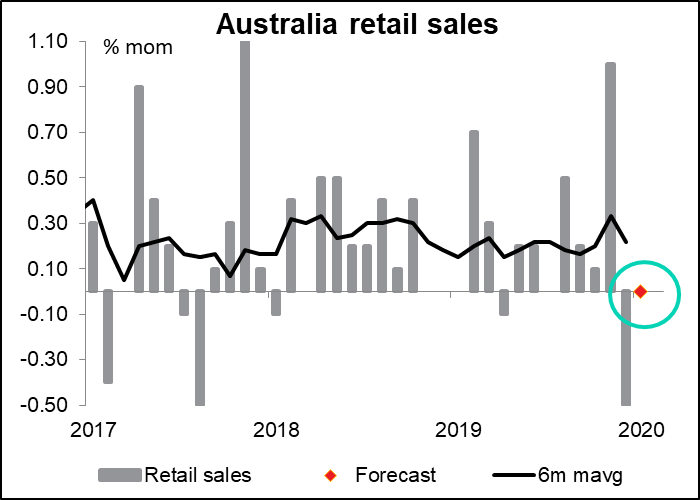 Then, as the European day gets underway but I don’t, Germany announces its factory orders figure. Unlike in the US, this one is a big deal. It’s expected to show a fairly solid rebound of +1.2% mom, which would be the best gain since June. Not bad but not that great either after three consecutive months of decline, and a particularly sharp decline the previous month. While better than nothing, I think if the figure comes in as expected it won’t be enough to dispel the idea that Germany – and therefore the EU – is likely to fall into recession in Q1. EUR negative 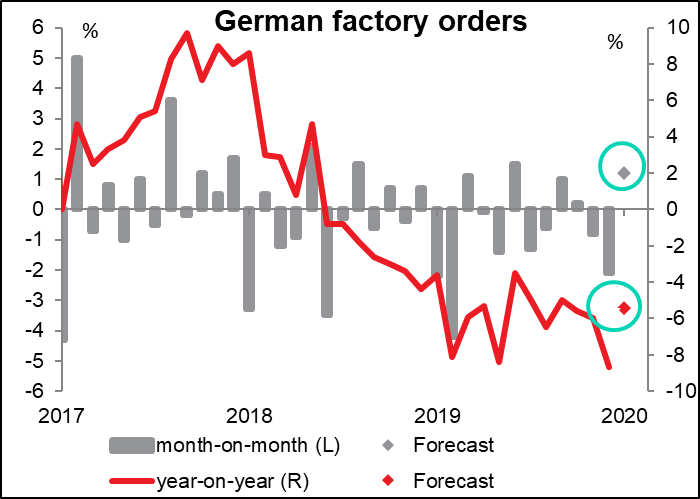 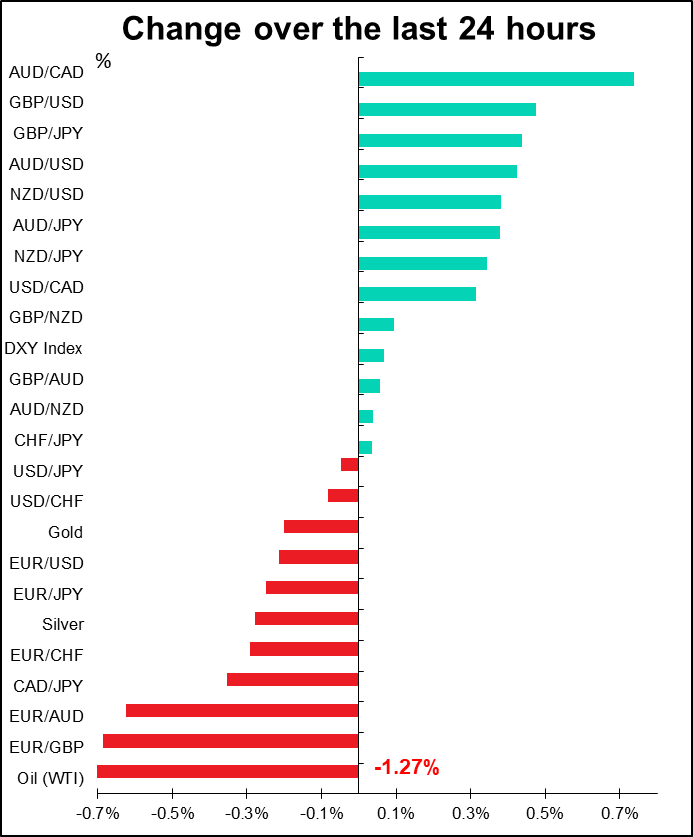