Not much movement in the FX world overnight.

EUR was particularly quiet, given that there was a European Central Bank meeting yesterday – you wouldn’t know it by looking at the rates. That’s because the policy statement following the meeting was largely unchanged and the press conference was…well, just kind of confusing. The meeting was described as an “intermediate assessment” of the faster purchases in the ECB’s Pandemic Emergency Purchase Program (PEPP). It had been assumed that the ECB would only reassess the pace of their purchases at the quarterly meetings when staff forecasts are updated, but if they’re going to have “intermediate assessments,” then they can do it at any meeting. In any case they didn’t give any hint of whether the faster pace of purchases is likely to be maintained when they do make the first formal assessment in June, so there was no big impact.

Now attention will turn to next week’s Fed meeting, which I’ll discuss in my Weekly Outlook later today. Summary: I don’t expect any change in policy or stance there, either, only some reassessment of the economy & perhaps a more optimistic outlook based on the recent improvement in the data. They have a long way to go before we see a “string” of good nonfarm payroll figures.

Speaking of employment data, yesterday’s US initial jobless claims were much better than expected for the second week in a row. They fell 29k instead of rising 34k as expected (economists had expected some mean reversion after the previous week’s large drop, but no!) Initial jobless claims are now at a post-pandemic low. 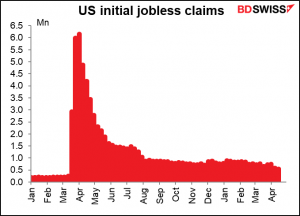 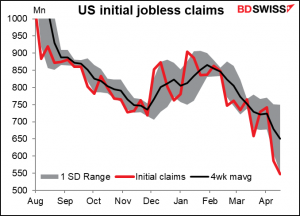 That didn’t help stock markets though as investors took fright from a Bloomberg report that President Biden will propose almost doubling the capital gains tax rate for wealthy individuals to 39.6% to help pay for social spending measures. The proposal is aimed at those earning $1mn or more, a group that doesn’t enjoy the same sort of public sympathy and affection that, say, endangered koala bears do. 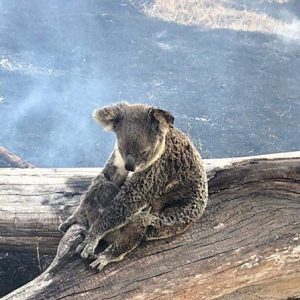 The proposal would push taxes on investment returns above those on labor, a change from the longstanding preference embedded in the tax code. White House Press Secretary Psaki noted that nothing has been determined yet as the White House searches for ways to pay for its spending plans. Nonetheless it was enough to counter the optimism that the jobless claims engendered and cause a modest risk-off sentiment in the markets.

GBP was once again the big mover and once again there’s no clear cause. Just technical? Failure to break 1.40 again sends GBP/USD back down? Or perhaps it’s people trading EUR/GBP and targeting 0.8700. The pair bounced off resistance right at that level (0.8699) We’ll have to see if today’s better-than-expected retail sales can do anything to boost confidence in GBP. 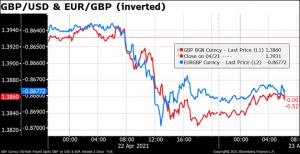 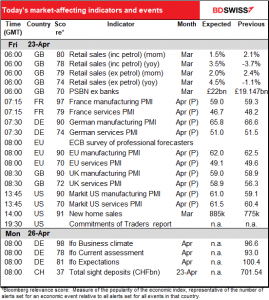 The UK retail sales are out already. They were much better than expected, with sales rising more than double the expected month-on-month pace. Viv Nicholson’s spirit is alive and well!

While the forecasts are given in the table above in the order in which they’ll be released, I find it more useful to look at them grouped by manufacturing & service sector. (The Japanese data are the actual numbers.) 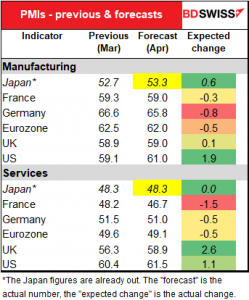 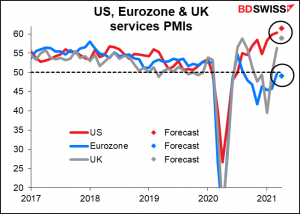 And that’s basically it today. 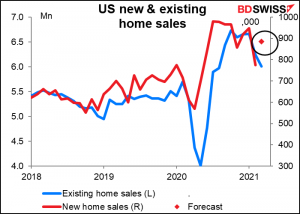 Then early Monday Monday, probably before I get this comment out, we get the Ifo indices. No forecasts available yet, so here’s a graph of the data for the data up to March. As you can see, not only is the current assessment (blue line) rising, but also the gap between the current assessment and expectations (red line) is rising too (grey bars), meaning people think things are getting better and are going to get even better in the future. 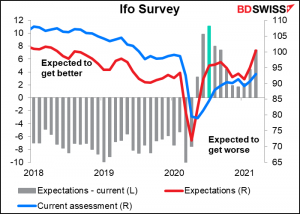 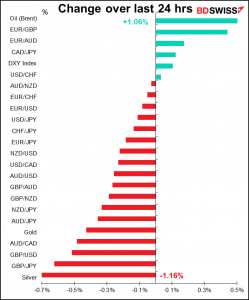