You are at:Home»MARKET PREVIEW»AUD Up on “Risk-On,” China Policy; EUR Down on Ukraine; Bank of Canada Inflation Mandate, UK Employment Data (tomorrow) 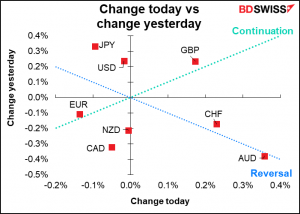 Somewhat odd movements this morning. The general sense is “risk-on” after Friday’s dreaded US consumer price index (CPI) came in in line with expectations (and hence no worse than expected) while the U of Michigan consumer sentiment survey showed sentiment slightly better than expected. The S&P 500 closed at a record high as a result.

In FX, the growth-sensitive AUD led the way, recouping most of its losses from the previous day. AUD was also boosted by Friday’s announcement from the three-day annual Central Economic Work Conference in China. The Communist Party’s top decision-makers said their main priority for next year is “ensuring stability.” They also vowed to “front-load” policies and keep the monetary policy stance flexible and appropriate. That’s good news for AUD, which is often used as a proxy for China owing to the countries’ close trade relations. 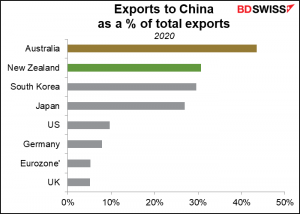 So far so good.

But then, why was CHF, supposedly a safe-haven currency, the second-best performer? Perhaps the market is anticipating a change in strategy from the Swiss National Bank at this Thursday’s meeting. I think they’re likely to issue the same statement as usual even if they clearly aren’t intervening as much as before.

A stronger CHF may also have been the counterpart of a weaker EUR. A weaker EUR without a noticeably stronger USD suggests factors unique to Europe – the rising tensions over Ukraine. The G7 foreign ministers Sunday warned Russia to de-escalate military build-up around Ukraine or face “massive consequences.”

The further gains in GBP were also odd given PM Boorish Johnson’s warning that the UK is facing a “tidal wave” of Omicron infections. Two polls over the weekend put Labour well ahead of the Conservatives, with one poll giving Labour its biggest lead in seven years.

To make matters worse (or better, depending on your perspective), there’s a local election in North Shropshire on Thursday and the Liberal Democrats – the one unabashedly “Remain” party in Britain – is the favorite to win. A lot of Conservative Party voters apparently are furious over a Christmas party that was held at 10 Downing St last year while such gatherings were banned for the hoi polloi and want to send a message to the PM. If the Conservatives lose that vote, PM Johnson could face a leadership challenge – which would probably be good for Britain in the long term, IMHO, but in the short term markets don’t like uncertainty.

It’s getting to look a lot like Christmas – people are winding down their positions. Specs took off a lot of risk last week by trimming their EUR, CAD, and JPY shorts. On the other hand they increased their AUD and MXN shorts marginally. 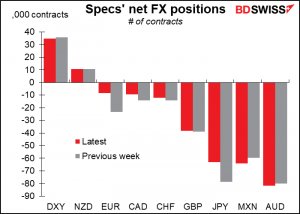 Hedge funds did basically the same – every significant position saw a decline in size except NZD. 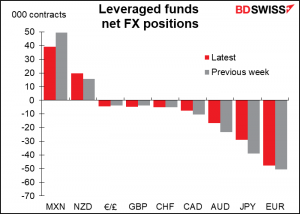 Retail on the other hand increased their short CHG, GBP, AUD, and JPY. They did pare back their long EUR. So all told they became notably more bullish USD. 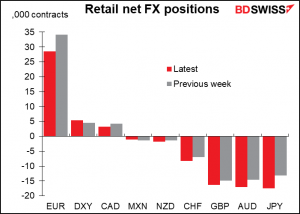 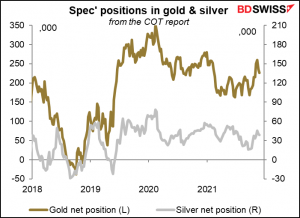 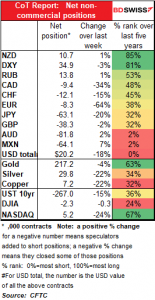 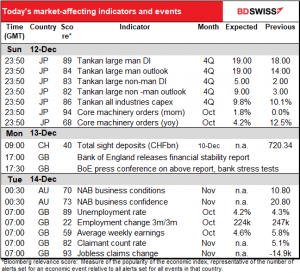 It’s the calm before the storm today. Not much on the schedule, right before we launch into one of the busiest weeks on record.

Is the Swiss National Bank (SNB) back in the market? Have they said “enough is enough”? Last week they upped their intervention and lo and behold, EUR/CHF paused in its seemingly inexorable decline. Let’s see what today’s number is and listen to what SNB President Jordan has to say on Thursday after the SNB’s meeting. 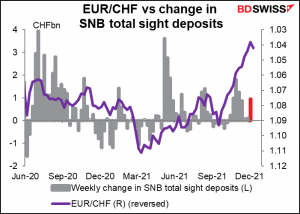 The G7 finance ministers will get together virtually to discuss inflation. I don’t know what they can do about it, but their policy pronouncements afterwards could affect markets.

Canadian Finance Minister Chrystia Freeland will hold a joint news conference today with Bank of Canada Gov. Macklem to announce a new inflation mandate for the Bank of Canada. The Bank’s mandate is reviewed every five years. If you want to see the previous ones, they’re available here. For the current mandate, set it 2016, the Bank and Government agreed that “…the inflation target will continue to be defined in terms of the 12-month rate of change in the total CPI, that it will continue to be the 2 per cent mid-point of the 1 to 3 per cent inflation-control range, and that the agreement will run for another five-year period, ending 31 December 2021.”

Bloomberg reported that the new mandate would continue with the 2% target while adding some new language around employment. Several other central banks have an employment component to their mandates, not just the Fed but also the Reserve Bank of Australia and Reserve Bank of New Zealand. It seems to be an Anglo thing, in which case Canada might as well go along – even if Britain doesn’t.

Just as an aside, Canada hasn’t been any more successful in keeping inflation within its target range than any other country has recently. 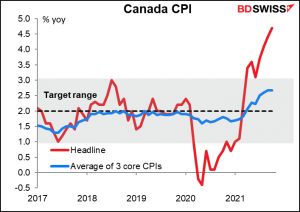 Overnight we get the National Australia Bank (NAB) business indicators. There are no forecasts but as they’re widely watched they’re worth a chart.

I was discussing the Australian purchasing managers’ indices (PMIs) with a former colleague of mine recently – I wondered why people don’t make more of a fuss about them? The preliminary Australian PMIs come out ahead of time along with Japan, Eurozone, UK, and US, but nobody pays any attention — the manufacturing PMI has a Bloomberg relevance score of 13.4 and the services PMI is even lower – abysmal. He said people focus on this instead. And indeed it does look like a smoothed version of the manufacturing PMI. He also noted that the PMIs were useful to get an idea of what the NAB business conditions was likely to do. But looking at the PMI, I’d agree that it’s probably too volatile to be useful.

Then we get today’s feature, which is actually tomorrow’s feature: the UK employment data. The market expects a pretty robust increase in employment plus a sharp decline in the unemployment rate. That’s encouraging – the Bank was worried about the possibility of a rise in unemployment after the Government’s job furlough scheme expired at the end of September, but nothing of the sort happened. 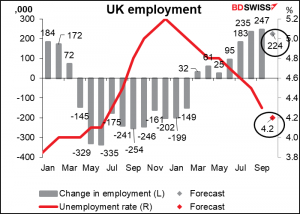 Meanwhile, the growth of average earnings is expected to slow, but to remain well above the Bank’s 1%-3% inflation target.

Falling unemployment and still-strong increases in wages…If it weren’t for the Government’s recent decision to launch another quasi-lockdown, I’d say this would be a slam-dunk rationale for a hike in interest rates this week. As is, I think they’ll probably hold off to see how the Omicron variant develops and maybe move at the next meeting in February. 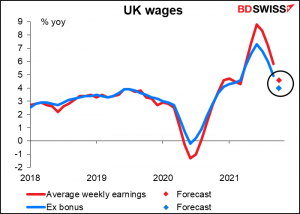