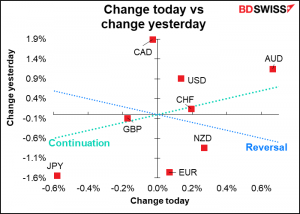 A major “risk-on” day in the FX market, as you can tell from the fact that AUD is at the top of my list and JPY is at the bottom.

How did this happen when stock markets were generally lower, including -0.7% for the S&P 500 and most Asian markets in the red this morning?

First, AUD. The economy is likely to get a boost – and the Reserve Bank of Australia could start to normalize policy – as the country gradually exits lockdown. New South Wales (NSW), the largest state in the country by population, started its phased reopening Monday for fully vaccinated people as the state passed its 70% double vaccination target. The second phase of its reopening plan will probably begin in the next week or two after the vaccination rate exceeds 80%. Victoria is also likely to start reopening later this month. 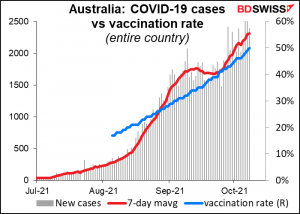 Moreover, with the price of Australian coal going vertical, the FX market can hardly ignore the improvement in the country’s terms of trade. Australian coal futures were up 12% and coal futures jumped by a similar amount in China yesterday (plus another 6.4% today) to a record high on reports that heavy flooding in Shanxi had closed 60 of the 682 coal mines in the province. (Shanxi accounts for some 30% of China’s coal supply). China has taken a number of steps to increase coal production but faces a potential shortfall of 30mn-40mn tons in Q4 regardless, according to Citic Securities. That’s a great opportunity for Australia.

Coal had been in the doldrums because of environmental concerns, but desperate times call for desperate measures. Coal has appreciated much more this year than oil has. 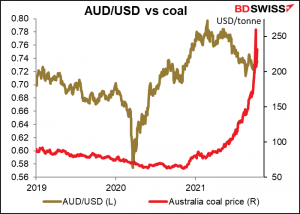 Coal had been in the doldrums because of environmental concerns, but desperate times call for desperate measures. Coal has appreciated much more this year than oil has. 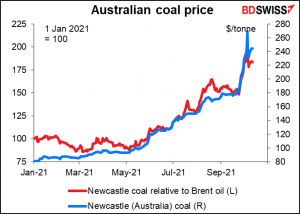 Coal has lost out to iron ore as Australia’s largest export by value, but still accounts for over 10% of total exports. 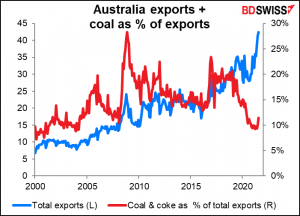 Coal was hardly the only commodity to gain. Energy and industrial metals gained further, making it harder for central banks to maintain that the current bout of inflation is only temporary. 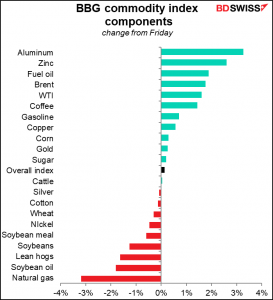 There was one point of respite though: natural gas prices retreated further. Dutch natural gas, which seemed to be channeling the spirit of Dutch tulips from long ago, is now down an astonishing 47% from the intraday high that it hit on Oct. 6th (EUR 155.0 MWh 🡪 EUR 82.25) Hold the applause, though; that still leaves it up 4.3x from the price at the beginning of the year (EUR 19.08). 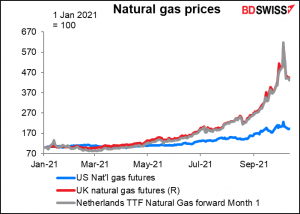 Against this background, expectations of central bank tightening are increasing. The market has moved up the time when it expects the Fed’s first rate hike to Sep/Oct next year from Nov/Dec in just one week. Such expectations are likely to support those currencies whose central banks have indicated a willingness to move, such as USD, GBP, and NZD. 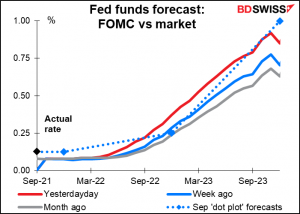 As for JPY, that’s the flip side of faster-than-expected tightening; the market expects that everyone currently working in finance will have long since retired by the time the Bank of Japan starts tightening policy. Expectations of higher inflation and therefore higher interest rates elsewhere in the world are likely to be negative for JPY.

Is the pandemic still a major concern?

From Zero Hedge
Wall Street Is Done With Covid: Pandemic No Longer Among Top 3 Risks For Market

According to the latest monthly survey of 600 global market participants conducted by Deuerjpytsche Bank, for the first time since June, the biggest perceived risk to markets is no longer covid. Instead the top three risks are i) higher inflation and bond yields, ii) central bank policy error and iii) strong growth failing to materialize or being very short lived (i.e. stagflation and/or recession). New covid variants that bypass vaccines has slumped from 1st place, which it occupied for the previous three months, to 4th place in October. 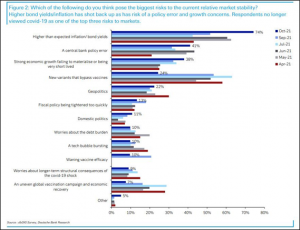 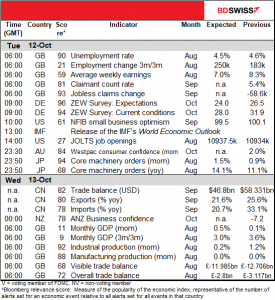 We already had the UK employment data. It was mixed; employment grew a bit less than expected, but average weekly earnings were higher. I think on balance that it should be bullish for sterling as the Bank of England is focusing on the fact that wages are rising faster than inflation, meaning the UK could see a wage/price spiral.

So we start with the ZEW survey of pundits, economists and other non-productive sorts. Both expectations and the current situation are expected to decline, 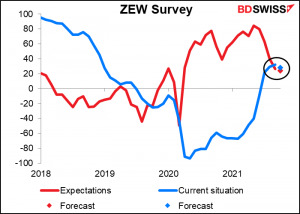 This is not surprising given the gradual slowdown in the German economy and the continued problems with the virus. 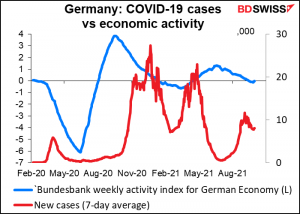 During the US day, the International Monetary Fund (IMF) will release its World Economic Outlook. This is a twice-yearly survey of the global economy that often proves market-affecting, eg if they say that global activity is likely to pick up then AUD and the other commodity currencies get a boost, etc.

The page linked to already has a chapter on inflation on it. The summary reads;

Despite recent increases in headline inflation in both advanced and emerging market economies, long-term inflation expectations remain anchored. Looking ahead, headline inflation is projected to peak in the final months of 2021 but is expected to return to pre-pandemic levels by mid-2022 for most economies. But given the recovery’s uncharted nature, considerable uncertainty remains, and inflation could exceed forecasts for a variety of reasons. Clear communication, combined with appropriate monetary and fiscal policies, can help prevent “inflation scares” from unhinging inflation expectations.

So the IMF too is in the “transitory” camp. That could dampen expectations of rate hikes in Britain and the US and lead to a slightly weaker USD and GBP today, if indeed people take notice of the paper.

The funny thing is, the Fed just published one of the more incendiary pieces ever to come out of a G10 central bank, “Why Do We Think That Inflation Expectations Matter for Inflation? (And Should We?) This paper argues that

Economists and economic policymakers believe that households’ and firms’ expectations of future inflation are a key determinant of actual inflation. A review of the relevant theoretical and empirical literature suggests that this belief rests on extremely shaky foundations, and a case is made that adhering to it uncritically could easily lead to serious policy errors.

This would mean the IMF’s emphasis on whether inflation expectations get unhinged or not is not particularly important, although everyone thinks is it.

(I was particularly fascinated by the footnote on pg. 3 that read, “I leave aside the deeper concern that the primary role of mainstream economics in our society is to provide an apologetics for a criminally oppressive, unsustainable, and unjust social order.” I wonder how long the author’s career at the Fed Board of Governors will last.) 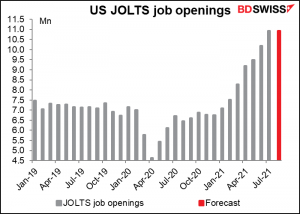 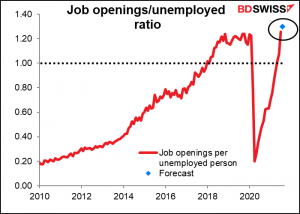 The other indication that this is a supply problem, not a demand problem, is the JOLTS quit rate. This is the percent of working people who quit their jobs every month. People are quitting their jobs at a record pace. 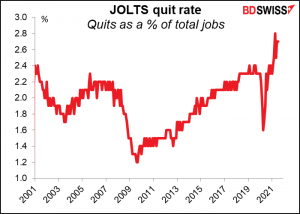 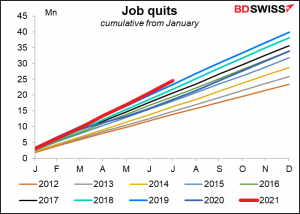 This is yet another sign that the slow growth in payrolls is a problem of the supply of labor, not the demand. McKinsey & Co. did a survey in five countries and found some astonishing statistics, particularly that 36% of the people surveyed who had quit in the last six months had quit without having another job lined up. This suggests that either they have a lot of confidence in the job market or they’re just fed up with working. The drop in the participation rate suggests the latter.

And that’s about it for the European and US day.

Overnight we get Japan’s core machinery orders. This is a Very Big Deal for the Japanese market although it seems to me to be pretty random – even the moving average is so variable, it’s hard to see a trend. But anyway, it’s expected to show another small mom rise as the Bank of Japan’s quarterly Tankan report for Q3 said. 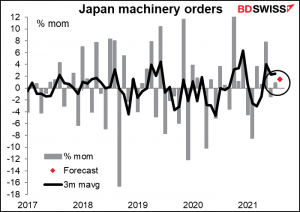 So far this year all the growth in orders has been from manufacturers. The question is whether the increase in demand from companies that are causing supply bottlenecks (such as chip manufacturers) will offset the drop in orders from companies that are facing supply bottlenecks (like automakers, who find that they can’t even fully utilize their existing capacity). Also when will non-manufacturing orders start to pick up? 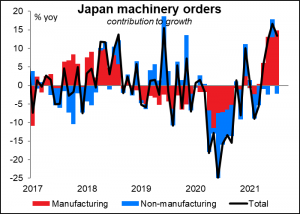 Overnight, China’s trade surplus is expected to fall substantially. Growth in both imports and exports is forecast to slow (especially imports). Although much of that could be due to base effects, it could also be due to the rolling power outages that are plaguing Chinese industry, or to the shortage of shipping containers to put the stuff in. Slower imports could be negative for AUD and NZD. 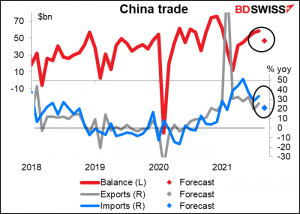 Then when Wednesday begins in London, we have the UK short-term indicators, the trifecta of monthly GDP, industrial & manufacturing production, and trade.

Within that esteemed group, the GDP figures are the most important (although the Bloomberg relevance index is a bizarrely low 11, compared to 92 for industrial production). The month-on-month forecast of +0.5% would be an acceleration from the previous month’s +0.1%, but the three-month/three-month rolling change would decelerate to 3.0% from 3.6%, which I think is more in line with the slowing growth that most people expect for the Dissolving Kingdom.(Adam Posen, president of the Peterson Institute for International Economics, predicted last week that the unification of Northern Ireland with the Republic of Ireland is “five to 10 years down the road.”) 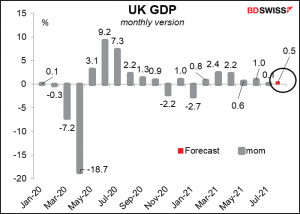 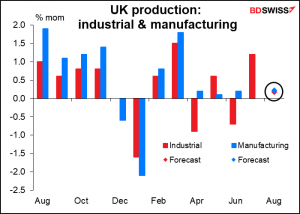 While the trade deficit is expected to widen. That’s kind of surprising, given that so few trucks are coming into the country, but maybe no trucks are leaving, either. 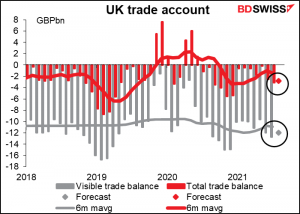 While these are not stellar figures, they’re enough to convince the Bank of England that the economy continues to expand. They therefore should be enough to keep the pound appreciating. I’d watch the trade figures carefully in the future though. They could start to deteriorate significantly as the higher energy prices feed through. 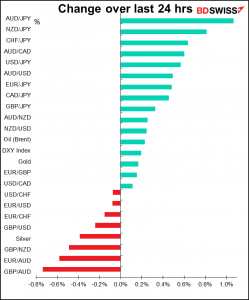