You are at:Home»MARKET PREVIEW»AUD Up, JPY Down in subdued FX Trading; Gov. Waller Speech, Japan Data

Not much movement in the currencies since Friday morning. The standout feature, such as it is, is the further decline in the yen. This seems to be driven by positioning as speculators go increasingly short the currency. The Commitment of Traders report shows that speculators have turned aggressively short JPY over the last two weeks. 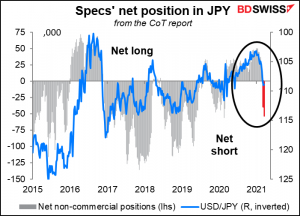 It’s not being driven by outflows from Japan; on the contrary, Japanese investors have been selling both foreign stocks and bonds. 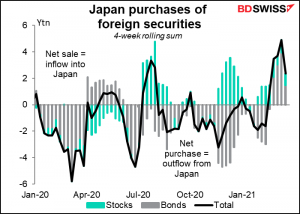 My guess is that speculators are positioning for what looks likely to be a surge back into foreign bonds.

Japanese investors tend to be trend followers; that is, they prefer to sell into falling markets and buy into rising markets. Once global yields start to stabilize – which they seem to be doing recently – the increasingly high pick-up in yield available in foreign bond markets even after hedging the currency risk may be attractive for Japanese investors. Perhaps speculators are front-running the start of the new Japanese fiscal year from April 1st, which often brings a surge of investment as new money pours into pension funds and life insurance companies. 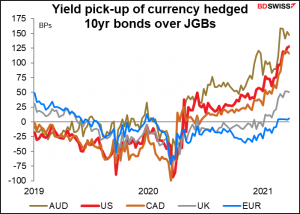 However, the yen was recovering somewhat this morning on a “risk-off” mood after Nomura Holdings warned of a “significant” loss (estimated at $2bn) from transactions with a US client, which is rumored to be Archegos Capital Management. Archegos stunned markets on Friday with some massive block trades amounting to over $1bn each in single stocks. The selling caused huge moves in a few US media companies and Chinese technology firms, such as ViacomCBS and Discovery, which fell around 27% each on Friday.

In the event, the S&P 500 closed up 1.7% on the day so it can’t have been all bad. And while the big concern over the weekend was whether more sales would be forthcoming this morning, stocks in Asia are mixed today with no signs of contagion or panic. Nonetheless the S&P 500 futures are down 0.8%.

The big news this morning is that the ship stuck in the Suez Canal has been “partially refloated.” But I think “partially refloated” is similar to “partially alive.” It won’t be able to get moving and get out of the canal until it’s entirely refloated. However up-to-the-minute news from that area is difficult to come by so watch for updates. Oil prices may fall once it’s freed, which could be negative for CAD.

This week’s changes in positioning were generally the continuation of the previous week’s reduction of net USD shorts. The biggest move was once again in JPY, where speculators went even shorter. The only currency long position that speculators increased was EUR, but the increase was quite modest — $443mn vs $1.6bn in JPY selling and a $597mn reduction in long GBP positions and $414bn reduction in long CAD. (Specs did reduce their short MXN position noticeably.) 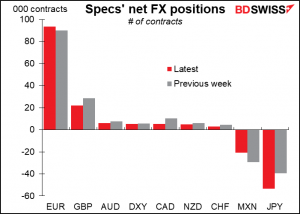 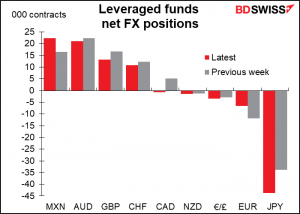 Speculators reduced their long positions in both gold and silver. 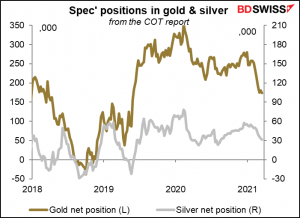 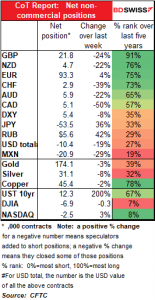 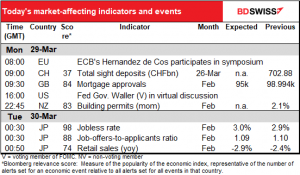 Swiss sight deposits haven’t done much of anything for quite some time as EUR/CHF has been declining all by itself. The Swiss National Bank (SNB) has apparently decided to let nature take its course instead of kicking the currency while it’s down. At last Thursday’s meeting, they toned down their rhetoric a bit; they said the SNB “remains willing to intervene in the foreign exchange market as necessary…” At their previous meeting, in December, they had said, “In light of the highly valued Swiss franc, the SNB remains willing to intervene more strongly in the foreign exchange market.” 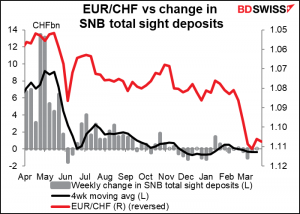 UK mortgage approvals are expected to drop somewhat. They’ve been exceptionally high thanks to last summer’s reduction in stamp duty, which was scheduled to expire at the end of March. It’s been extended to the end of June, so the housing boom is likely to last for a few more months. Fuelled by the tax cut plus changes in work habits, the average price of a house in Britain rose to a record high in February. 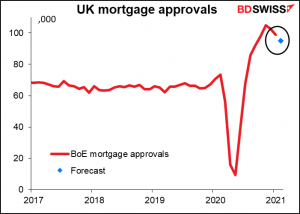 And that’s about it for today’s indicators. The main feature of the day will be listening to newly appointed Gov. Chris Waller take part in a virtual discussion hosted by the Peterson Institute for International Economics. This is his first speech since joining the Board of Governors last December. Waller is thought to be a confirmed dove, which is why The Orange Lord appointed him. We’ll get to confirm that for ourselves today.

Overnight, New Zealand announces its building permits, which have been doing pretty well recently. There’s no forecast but it has a fairly high Bloomberg relevance score, so I’m presenting you with a graph anyway. As usual, no extra charge. 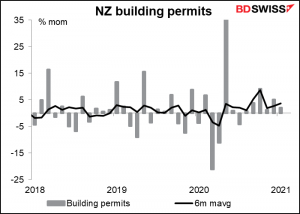 Japan’s employment data is expected to deteriorate somewhat, with the unemployment rate ticking up (although remaining within the recent range) and the job-offers-to-applicants ratio ticking down (ditto). The State of Emergency declaration back in January appears to have caused a fall in employment in customer-facing service businesses. The state of emergency was in place until March 21st, meaning we can probably expect next month’s figures to be weak as well. 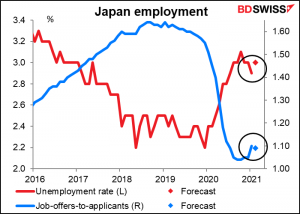 Japan’s retail sales are expected to be down further on a year-on-year basis. That no doubt ties in with the above-mentioned State of Emergency. 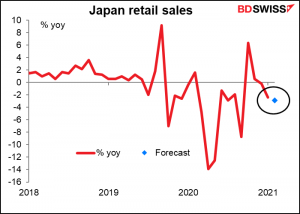 If the market consensus forecast turns out to be correct, Japan’s retail sales will be 3.0% below pre-pandemic levels. (Note that this is using the yoy forecast, which is the more closely watched of the two and has more samples in Bloomberg – 16 vs 12. The two forecasts are not equivalent.) 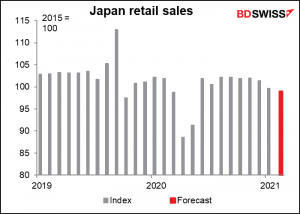 This seems to be par for the course nowadays though. It’s in line with the UK and a bit above where Germany and the EU as a whole were in January. Hence, on a comparative basis, Japan isn’t doing that badly. 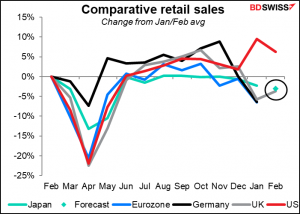 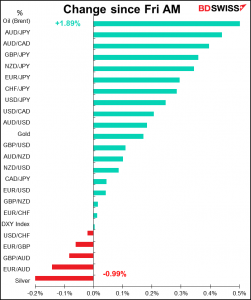