You are at:Home»MARKET PREVIEW»AUD, NZD off on Virus Risk, GBP up on Employment data; Bank of Canada meeting 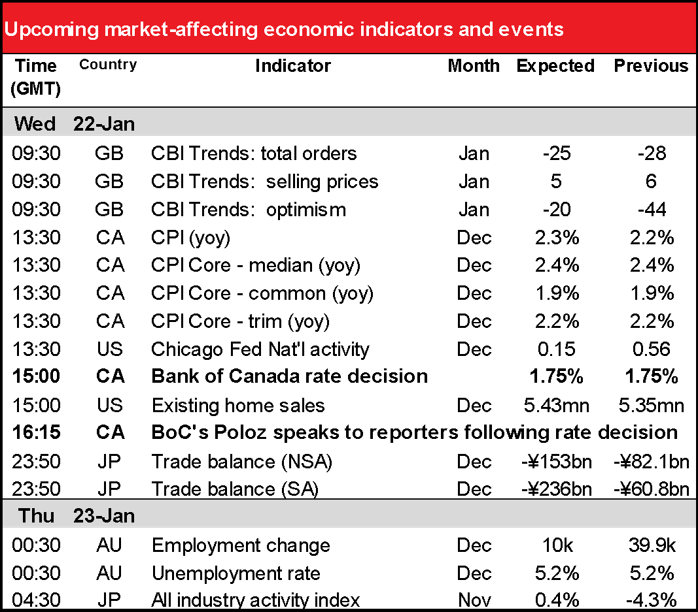 The China coronovirus story seems to be dominating the FX market. So far 440 confirmed cases and nine deaths. A case has been confirmed in the US. If people are afraid to interact with other people, they cut back on their shopping and economic activity slows. Hence a weaker AUD and NZD. But markets are remaining calm; although US stocks were down about 0.5%, most Asian markets are up this morning, including China. Nor is there much of a  corresponding rise in JPY; it gained on some haven demand in the US session, but subsequently lost most of the gains. Both USD/JPY and EUR/JPY are little changed from yesterday morning’s levels.

People are reaching back to the Severe Acutre Respiratory Syndrome (SARS) epidemic in 2002-03 and South Korea’s Middle East Respiratory Syndrome (MERS) outbreak in 2015 for lessons on how the current outbreak might affect China and the global economy. Answer:  not clear. On the one hand, the service sector and personal consumption are a much bigger part of the Chinese economy now, and so the potential harm from people cutting back on leisure activities such as dining out, theaters and recreational shopping is much greater. SARS caused China GDP to slow by 2 percentage points; this could be worse.

On the other hand, the health authorities have learned from their experience how to deal with these problems, so the problem may not last that long. The complicating factor is this week’s Lunar Holiday in China, which will provide an opportunity for the 11 million people in Wuhan, the epicenter of the epidemic, to spread the disease around the country.

What do these experiences suggest?

In short, I don’t expect this outbreak to have a lasting impact on the financial markets. I think currency movements caused by these fears will be quickly reversed and therefore offer good trading opportunities. 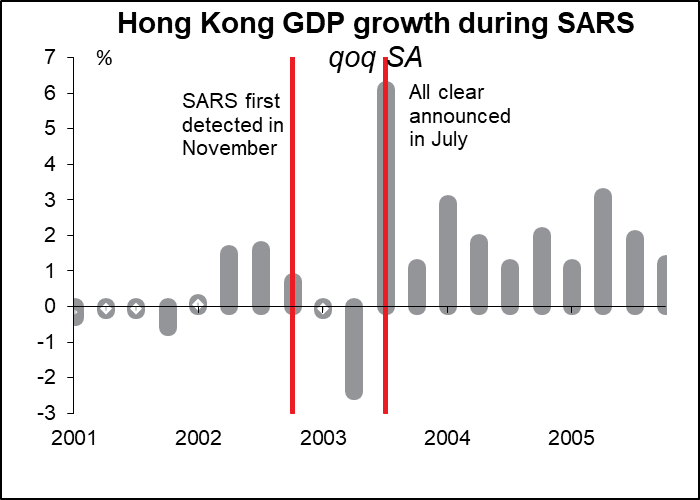 GBP went its own way as yesterday’s better-than-expected UK labor market data pushed the pound up. Employment grew almost double what the market expected (208k vs 110k expected) and growth in average weekly earnings was unchanged, rather than slowing as expected. But one data point doesn’t make a trend. Wait for the purchasing managers’ indices (PMIs) on Friday. Today’s CBI trends survey may give a clue to the PMIs (see below).

I’m surprised to see CAD weakening today. Maybe that’s due to the lower oil price. I’d expect it to rise in anticipation of a hawkish Bank of Canada meeting (see below).

The main even of the day is the Bank of Canada (BoC) policy meeting. Since that’s the main event, let’s deal with it first.

The market sees a significant (50-50) chance of a rate cut by the BoC sometime this year. Interestingly, they seem to be predicting that if the Bank doesn’t cut by October, then they’re likely to start hiking rates. I think the BoC is likely to upgrade its outlook further at this meeting. At its last meeting on 4 December, the BoC changed its view from fears of “the global slowdown spreading” to “nascent evidence that the global economy is stabilizing.” The main concern for Canada is of course the global trade picture, and with the passage of the USMCA, those fears have diminished considerably. That should lead them to upgrade their view.

The BoC said at that meeting that “Future interest rate decisions will be guided by the Bank’s continuing assessment of the adverse impact of trade conflicts against the sources of resilience in the Canadian economy – notably consumer spending and housing activity.” While the trade picture has improved since then, the domestic news has been disappointing– both retail sales and housing starts have continued to slow. On the other hand, with inflation on target and starting to trend higher (see below), there’s certainly no urgency to cut rates. Moreover, the Bank also said last time that ““Fiscal policy developments will also figure into the Bank’s updated outlook in January.” These fiscal policy developments have been generally positive – the government announced in December that it would increase the personal exemption for about half the country, which should support consumer spending and the housing market and add to growth.

Net net, I expect the BoC to adopt a more optimistic tone thanks to the improvement in the global trade outlook and for CAD to appreciate following the meeting.

The day starts with a decidely second-tier – or even lower – indicator, the Confederation of British Industry (CBI) industrial trends survey. Normally this is a snoozer, but with next week’s Bank of England decision on a knife edge – probably the vote will be 5-4, we just don’t know which side will be five and which will be four – every datum counts. 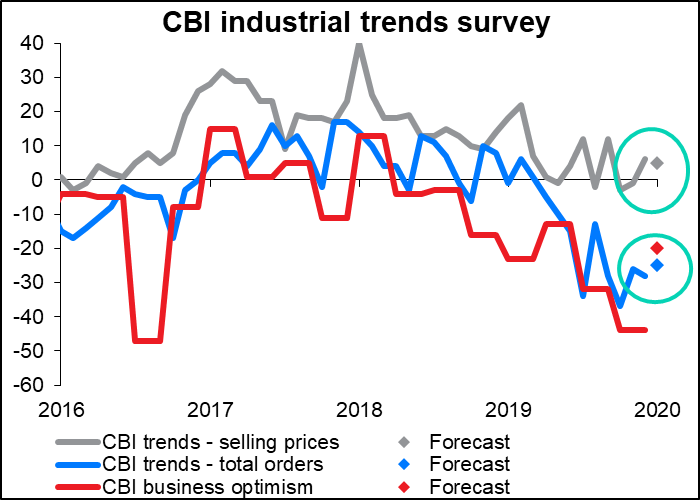 The market pays much more attention to the manufacturing purchasing managers’ index (PMI). However the CBI Industrial Trends survey comes out a few days before the PMI, so it’s worth asking:  how well does the CBI survey predict the PMI? Over the longer term (last 10 years) not so well, but over the last five years there’s been a pretty good relationship. The adjusted R-squared is 0.55 and the T-stats for all three components are statistically significant, if that means anything to you. It’s clear though that the two surveys don’t share the same extreme points, which makes it doubtful if the manufacturing PMI is going to spike up like the regression result suggests it should — if the forecasts for the CBI Trends survey are correct, they imply a manufacturing PMI of 50.9, which would be stunning. In any case, the forecasts for the CBI survey are no doubt GBP positive. 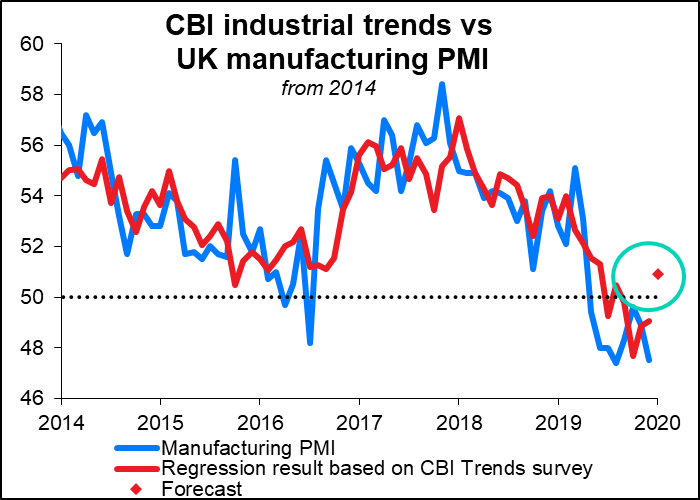 The US Chicago Fed national activity index (CFNAI) is different from the indices that the other regional Fed banks announce. Those gauge conditions in that particular Fed district, while the CFNAI gauges overall economic activity and related inflationary pressure on a national basis. A positive number corresponds to growth above trend and a negative number, below trend. Although the components have all been previously announced, the indicator is one of the more closely watched among those issued by the various regional Feds. However it’s difficult to interpret any one number, because the figures are so volatile. This month’s figure is expected to be down significantly from the previous month, but still in positive territory and higher than the 3-month moving average, so I would interpret it as positive for the dollar in that it shows economic momentum was still strong last month. 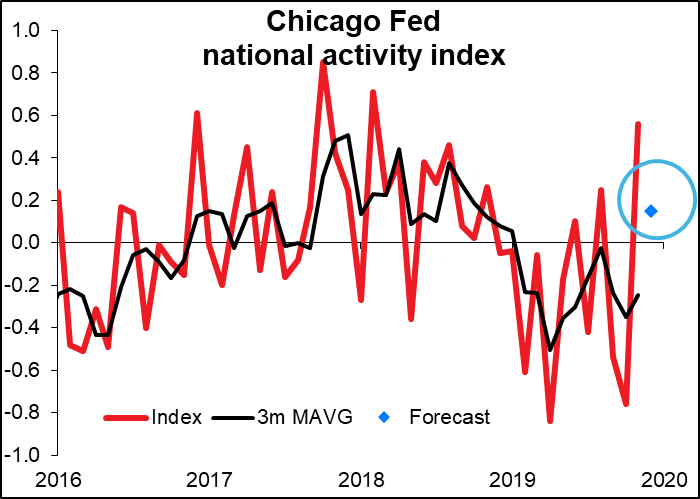 Next up are the various measures of the Canadian consumer price index (CPI). Usually these would be major indicators, but a) inflation isn’t what the Bank of Canada is worried about nowadays, and b) the BoC decision is in 1½ hours anyway, so I don’t think the market is going to worry about this data – which in any case is expected to be absolutely unchanged from the previous month, at least as regards the core CPIs, which are what the BoC looks at. CAD neutral. 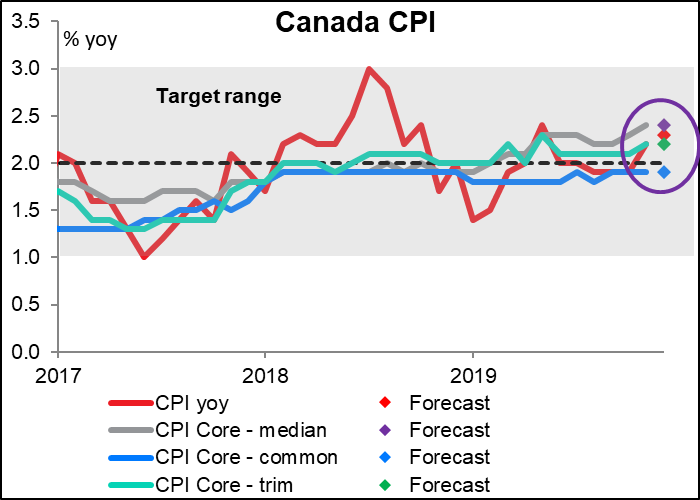 US existing home sales are forecast to be up modestly, as are new home sales (which come out on the 27th). This would continue the run of good US housing figures:  the Hational Association of Home Builders (NAHB) housing market index remains near its cyclical high (which is even higher than it was during the housing boom in 2005/06), while housing starts soared in December. Nonetheless neither existing nor new home sales is expected to achieve a new high, and indeed existing home sales are just fluctuating within the recent range. It’s unclear though whether this is due to stable demand or insufficient supply. Until there’s a sign of a trend from these figures, up or down, they’re just USD neutral. 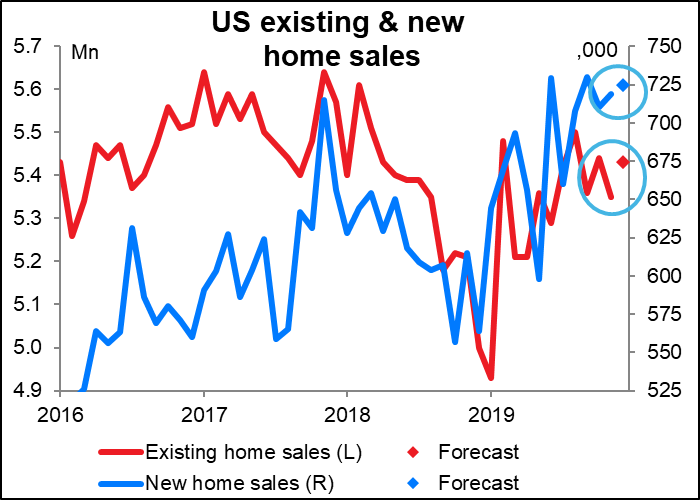 Japan’s trade balance is forecast to move further into deficit on both an SA and NSA basis. This may be an unintended victory for Trump’s trade policy. Although Japan does still have a large trade surplus with the US, it fell almost in half in 2019 to ¥3.46tn from ¥6.45tn. The consistent deficit, combined with negative interest rates out to 10 years, should be a negative for the yen. 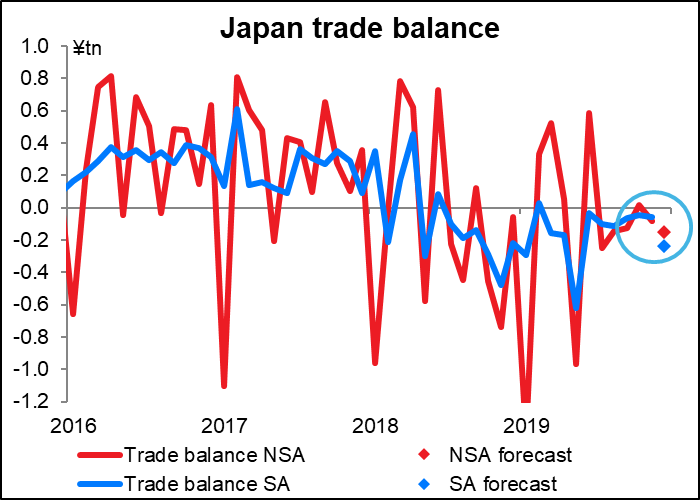 Overnight, we get Australia’s employment data. This is a key indicator for the Australian economy as the Reserve Bank of Australia (RBA) has stated its intention to get unemployment down to “full employment,” which it calculates to be around 4 3/4%. (In central bank-speak, full employment is the lowest level that unemployment can get to before it starts triggering inflation.) In that respect, these figures are not likely to get anyone excited. The unemployment rate is forecast to remain at 5.2%, still above the 5.0% rate seen some months ago, and the change in employment is expected to be nothing to get excited about. Australia is the other country (along with Britain) where a rate cut is seen as more or less a sure thing this year – the market sees a 52% chance of a cut as early as next month (4 February). These figures, showing no improvement in the employment picture, will do nothing to reduce the odds. AUD negative. 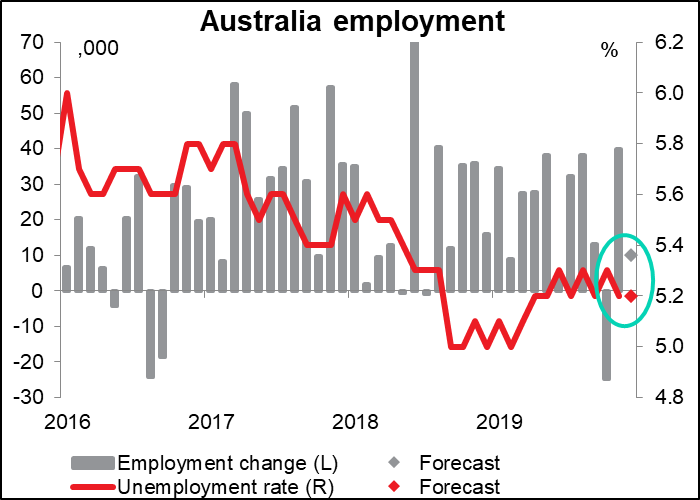 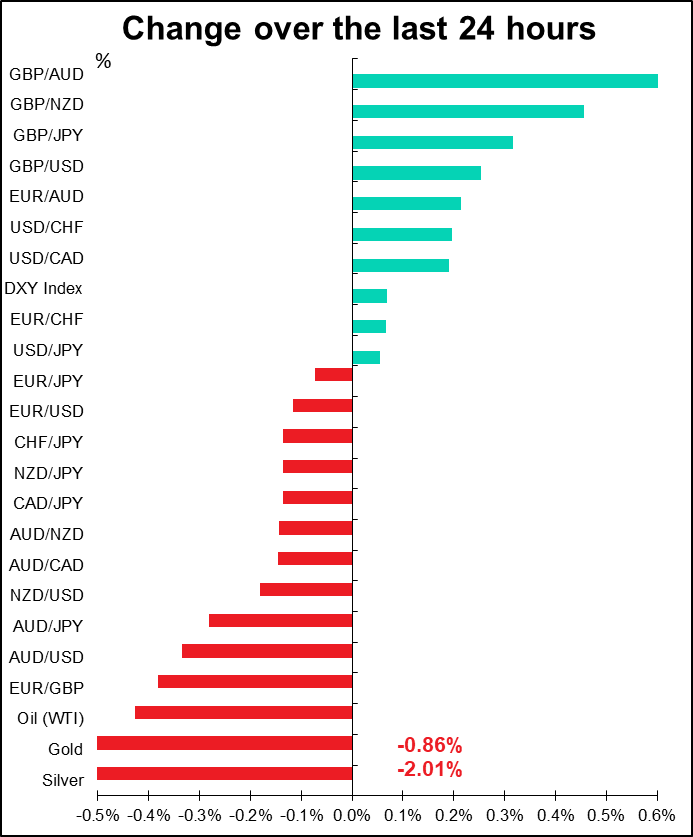