You are at:Home»MARKET PREVIEW»AUD & other Commodity Currencies Down; Jobless Claims, Japan Current account 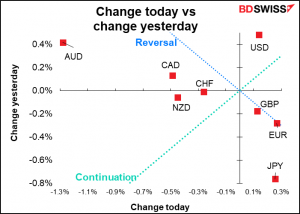 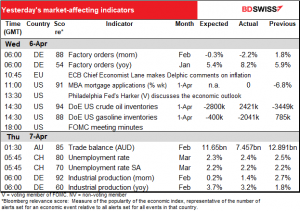 The market giveth, the market taketh away. Boyth! AUD was up about 1.2% on a trade-weighted basis Tuesday morning after the Reserve Bank of Australia (RBA) changed its forward guidance to indicate that it could tighten policy sometime soon. The currency was up a further 0.4% Wednesday morning when I ran my spreadsheet. This morning? Down 1.34%! AUD/USD (red line) is now lower than it was before the RBA announcement. 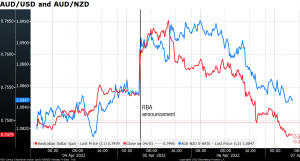 In this AUD was just the leader (as usual) among the commodity currencies as risk sentiment soured and both stocks and commodities fell. 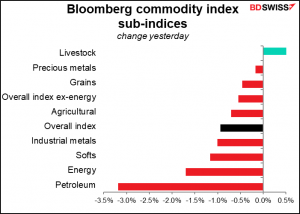 I’m not sure what prompted such a big risk-off move. There weren’t any major developments in Ukraine that I could find. The European Union continued to edge toward further sanctions but nothing was decided.

Oil fell particularly sharply after the International Energy Agency (IEA) said its members would release 60 million barrels of oil from their Strategic Petroleum Reserves (SPR), joining in with the US, which earlier announced a release of 180mn barrels from its SPR.

The moves have had some effect. The prompt time spread, the difference between the first and second futures contracts, which indicates how much of a premium dealers are willing to pay to get oil ASAP, has narrowed significantly over the last month. This indicates demand and supply are coming more into balance. There were also reports that cargoes of Russian oil from the Far East have sold out for next month, indicating that the country is still managing to find buyers for its oil despite the sanctions.

Although not the sole cause, a collapse in the Caixin/Markit service-sector purchasing managers’ index (PMI) for China (blue line) didn’t help matters. The index fell 8.2 points to 42.0 as the surge in COVID-19 cases in China kept people at home. 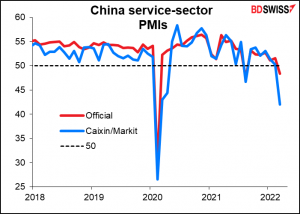 The focus of attention yesterday was the minutes of the March Federal Open Market Committee (FOMC) meeting. There were no big shocks in the minutes, just some of the details that people were looking for, namely:

EUR gained despite the steady gains in the polls for Marine Le Pen, the main challenger to French President Macron in Sunday’s election. Yesterday’s polls for the second round runoff (April 24th) put President Macron ahead of Le Pen by 54%-46% (Ipsos), 53-47% (Opinionway), and 52.5%-47.5% (Ifop). These all show Le Pen doing much better than the 66%-34% margin in the 2017 election. French stocks have underperformed the overall European market recently, with the CAC 40 equity index (-2.21%) falling more than the broader STOXX 600 (-1.53%) for the sixth consecutive session. 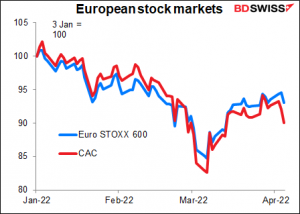 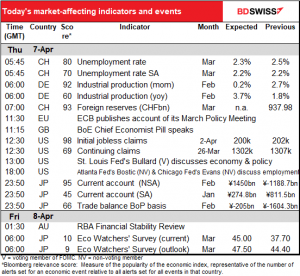 We discussed the Swiss unemployment and foreign reserves and German industrial production yesterday, although the data didn’t come out before I sent out the comment.

The next thing on the schedule then is the account of the European Central Bank’s March meeting. You may remember that at that meeting, the ECB accelerated its tapering schedule for the Asset Purchase Programme (APP) and reinforced their commitment to price stability even in the face of a possible slowdown caused by the war in Ukraine. There was no mention of any new instruments that might replace the expiring Pandemic Emergency Purchase Programme (PEPP). The ECB liked the PEPP because under its rules they were pretty much free to buy bonds as they wished, rather than being limited in how much of this or that country’s bonds they could buy. This freedom helps them to deal with market fragmentation when one country gets in trouble and its bonds start to get out of line. President Lagarde and others have raised the possibility of creating a new purchase program that would give them this flexibility but so far nothing concrete. The market will be interested in seeing if there was any discussion of this idea and if so how far it went. There will also be interest in what the Governing Council thinks of the war in Ukraine and its likely effect on policy.

US initial jobless claims are starting to be a non-event every week. This week, when they’re expected to be down 2k, should be particularly non-eventful. We have some Fedspeak coming up but I doubt if these speakers, who are often heard from, will have the same impact as Tuesday’s speech by Gov. Brainard.

Overnight we get Japan’s current account. This is one of those months when there’s a big seasonal effect because the SA figure is expected to be up only a tiny bit while the NSA figure is expected to be miles different from January. This discrepancy probably stems from the annual distortions caused by China’s Lunar New Year, since China alone accounts for some 25% of Japan’s trade. 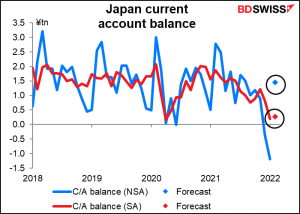 Although this indicator has quite a high Bloomberg relevance score, indicating that the markets pay close attention to it, the reaction in USD/JPY is not that well correlated with the result, neither the NSA (the more closely watched) nor the SA version. 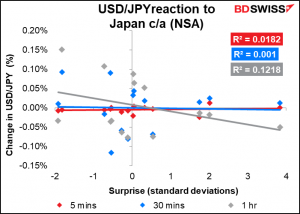 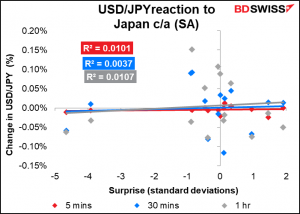 After Tuesday’s change in the Reserve Bank of Australia (RBA) policy guidance, its semi-annual Financial Stability Review will provide an updated view on the RBA’s assessment of the economy, most importantly household balance sheets. That will be important for understanding how the RBA thinks households will respond to higher interest rates and therefore how high they can raise rates without crashing the economy. 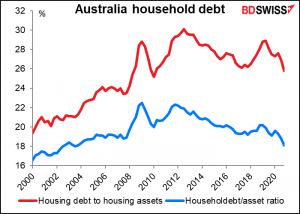 Nobody cares about Japan’s Eco Watcher’s Survey, but I do, so I look at it every month. It’s expected to improve a bit, which is good news and in line with the service-sector purchasing managers’ index (PMI), which rose to 49.4 from 44.2 during the month. 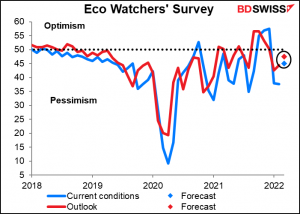 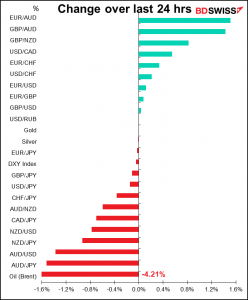